Firefox for Android updated with Chromecast and Roku video streaming 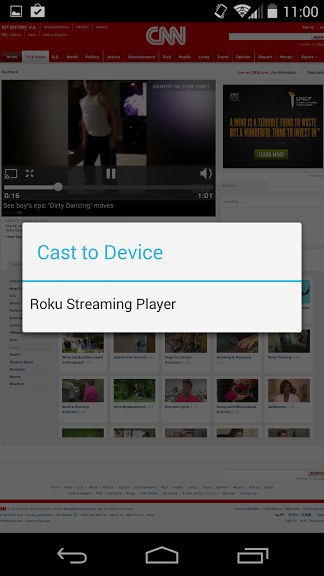 You can’t teach an old dog new tricks, but what about a fox? Better yet, what about a Firefox? Cheesy introductions aside, today Mozilla announced a new video streaming feature for Firefox’s Android web browser. This Chrome alternative can now push videos from your mobile device to your TV via Google’s Chromecast media stick or a Roku set-top box.

Say you’re watching a hilarious video on your smartphone, but you’d rather see it on the biggest screen in your house. Here’s what you do. Open Firefox for Android, launch the video you want to watch and select the casting icon. As long as your TV is connected to a Chromecast or Roku box on the same WiFi network, you’ll have the option to push the video directly to your big screen.

While it might not be a big enough reason to replace Chrome as your device’s primary browser, Firefox isn’t a bad alternative my any means.