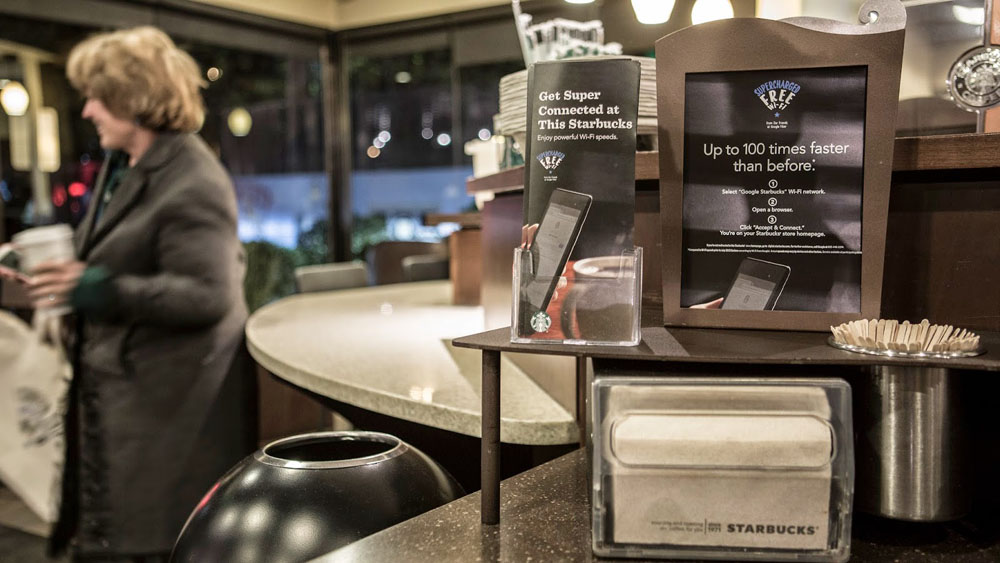 Google promised back in July that its deal to provide free WiFi at 7,000 U.S. Starbucks locations would include connections up to 100x faster than usual in cities with Google Fiber – and it has now started to deliver on that. The company announced in its Google Fiber blog that a Kansas City branch is now home to the fastest Starbucks WiFi in the U.S.

At the corner of 41st and Main Street, a Kansas City Starbucks is teeming with people writing emails, streaming music, sharing videos, and more. Now that same Starbucks—one of the busiest in Kansas City—is the first to be connected directly to Google Fiber, so anyone visiting the store can get super-fast Internet with their Pumpkin Spice Latte.

The technofest doesn’t end there, either …

Don’t have your laptop on you? Google has you covered, with ‘community tables’ equipped with Chromebooks hooked-up to the Fiber connection. And if your own device is running low on juice, Duracell’s wireless charging mats are in place to top them up.

If Google Fiber hasn’t yet reached your city, you should still see a ten-fold increase in Internet speed in stores where Google WiFi is available – just look for “Google Starbucks” in the list of available WiFi networks.

The rollout of Google Fiber has been slower than expected, with Austin set to become the third city to get the super-fast service in December, some three months behind schedule. The reason for the delay appears to be difficulty negotiating deals for the optional television service the company offers alongside high-speed broadband.