Nokia has today announced its first new product since selling its devices and services division to Microsoft, the Nokia N1 tablet – a device bearing more than a passing resemblance to Apple’s iPad mini 3.

Aimed initially at the Chinese market, the $249 Android-powered tablet has decent specs, with a 2048×1536 resolution display, a 2.4GHz quad-core Intel Atom Z3580 CPU, 2GB RAM, 32GB storage, 8MP main camera and 5MP front-facing camera. It’s also one of the first devices to support the new reversible USB-C connector. Impressively, the company has managed to make it both slimmer and lighter than the iPad 3 it resembles.

But perhaps more interesting than the hardware is the software …

Rather than stock Android or a conventional overlay, Nokia uses a homescreen launcher called the Z Launcher. While this is available for Android phones, the tablet version is exclusive to the N1.

The Z Launcher aims to do things: give you fast access to your apps by simply drawing a letter on the homescreen, and to predict which apps you are likely to need at any given moment based on where you are and what you’re doing at the time. 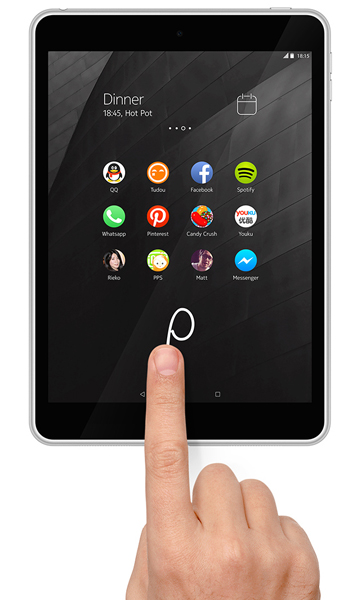 Speaking to The Verge, Nokia’s Brook Eaton says the launcher inspired the tablet, rather than the other way around.

We started looking around, we just didn’t find any good Android tablets out there. We have such a beautiful, simple, and elegant Z Launcher, why not build a device that is also built on the same principles as being super simple and easy to use and elegant?

The company posted a somewhat bizarre video as evidence for the positive reception it says the device got at the keynote presentation. This comprises four people, the first of whom appears to be rather eccentrically dressed …

It’s not yet known whether the N1 will go on sale in the USA: after launching in China in February, Russia and selected European countries are next in line. The launch price will be the equivalent of $249, putting it well below the $399 price point of the iPad mini 3 – but only $50 less than an iPad mini 2.

Check out the gallery below for more photos.