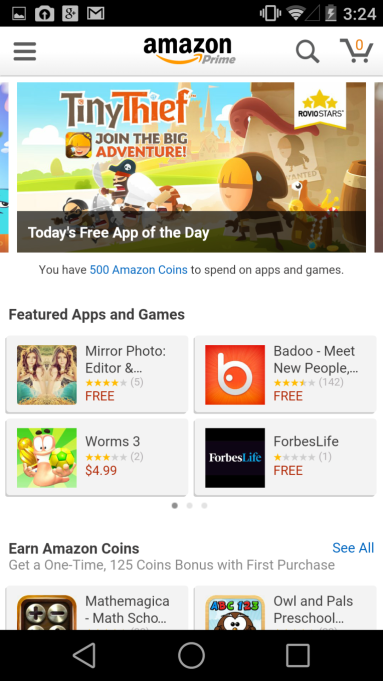 Back in October, Amazon updated its official Android app with hidden yet fully functional access to its own app store. Amazon then vaguely mentioned the new feature in a subsequent press release, perhaps hoping the move would go unnoticed. But it hasn’t taken long for Google to catch wind of what happened, and the search company clearly isn’t happy about the move.

Google responded by forcing Amazon to remove its main app from the Play Store. Some users are still temporarily able to access the app listing with a direct link. The sudden takedown is largely unsurprising, given that the Amazon Appstore is a direct rival to the Play Store, and Google isn’t happily going to allow its users to access a rival storefront through its own app store.

In the aftermath, Amazon has released a new app on the Play Store called Amazon Shopping that is the exact same as the original app, absent the hidden app store. Amazon provided the following statement to TechCrunch about the situation, noting that Google changed its Developer Distribution Agreement on September 25 to ban alternative stores from the Play Store.

“We launched a new Amazon App for Android Phones on September 9 that provides an award-winning mobile shopping experience, enables customers to discover and purchase all of Amazon’s digital catalog, and provides customers access to the Prime Instant Video player and unlimited streaming of over 40,000 movies and TV episodes.  Google subsequently changed their Developer Distribution Agreement on September 25.  As a result, we removed the app from Google Play and published the Amazon Shopping app.  Customers who want the best Amazon experience on their Android phone, including access to Prime Instant Video and Amazon’s entire digital catalog, can still get the Amazon App for Android Phones at amazon.com/androidapp.”

Android Police went digging and found the changed section of the agreement. Prior to the revision, version 4.5 read as follows:

4.5 Non-Compete. You may not use the Market to distribute or make available any Product whose primary purpose is to facilitate the distribution of software applications and games for use on Android devices outside of the Market.

Following the change on September 25, the agreement now reads:

4.5 Alternative Stores. You may not use the Store to distribute or make available any Product which has a purpose that facilitates the distribution of software applications and games for use on Android devices outside of the Store.

All in all, Google has effectively squashed Amazon’s chance at quietly promoting its own app store through the Play Store. Android users looking to get the Amazon Appstore on their device will have to resort back to the old, trickier way of downloading the app, changing installation settings, installing the app and logging in.