Startups like kiddoEMR could change lives using Google tech, but this one desperately needs Google Glass 2.0

Dr. Joseph “Joe” Cohen has been a pediatrician for 15 years, and he saw a need in the medical workplace. Current EMR (electronic medical record) solutions are ridiculously expensive, antiquated, offer little support for pediatrics, and require hours of rigorous training before doctors can use them to efficiently document and organize patient information. Seeing this, Dr. Joe (as his young patients call him) developed a pediatric solution of his own, and deployed an early version in his own practice, Cedar Park Pediatrics, with the added bonus of bringing down the average cost of processing patients from $58 to around $20 per visit.

And while the system is of course platform-agnostic for the most part, Google technologies like Chrome and Glass are a key players in the kiddoEMR product despite downfalls that Dr. Joe says make the current generation of the latter completely impractical for the workplace. The system of course will mostly be interacted with via an in-browser interface on a desktop computer, but Glass provides some robust functionality that would make it a no-brainer for pediatricians. Doctors like Joe, though, need to be able to use their hands, and the old saying that “a picture is worth a thousand words” is especially true when diagnosing patients.

We got a chance to sit down with Dr. Joe at CES 2015, and he said that kiddoEMR has in the last 30 days hit a milestone of having more than 14 million children in its database worldwide, now serving 160 total facilities. The EMR solution is being sold at a discount this week for CES, and Dr. Joe says that 29 facilities have signed on in the last 7 days—at a listing price of $12,500 for 2 years of support. KiddoEMR is doing pretty well so far, and pediatric facilities have apparently seen it as something they can’t turn down—especially considering it’s already HIPAA (Health Insurance Portability and Accountability Act)-compliant and takes advantage of technology far more modern than the fax machines that still plague the doctors’ offices of 2015.

Google Glass is just an extension of an EMR system that Dr. Joe hopes will disrupt the industry, and it does a lot to make a pediatrician’s life easier. Beyond just snapping photos of patient symptoms (and sending them to via a secure network to HIPAA-compliant servers), the app also tries to make the day-to-day life of the doctor a bit easier by way of secure communication and documentation features. With Glass, pediatricians can do anything from send HIPAA-compliant messages to colleagues to capture and record video of patients, uploaded straight to their chart.

Doctors aren’t new to wearable technology. As a matter of fact, in the 1,600’s we wore parabolic head mirrors that actually focused the light, and had a hole in the middle that let you focus and see the dar recesses of the patient. Google Glass is the new wearable medical device. It allows us to dictate speech-to-text for the chart instead of typing findings, to document our visual diagnoses in order to make the final diagnosis, to contact our coworkers, and to return messages & phone calls. The kiddoEMR app allows us to check our schedule, contact the front desk, and see what our day looks like. Another real benefit comes from not just taking a static visual diagnoses, but record a video of certain disorders and preserve that observation securely and accurately.

Glass isn’t the only Google technology that Dr. Joe and his team at kiddoEMR are taking advantage of, however. As for the EMR solution itself, which is hosted both remotely and locally (depending on the parts that need to be HIPAA-compliant), kiddoEMR is an HTML5 and PHP backend made to run on Google Chrome. “Basically what we’re doing is putting together our own Chromium build that users can download and has security features—like two-factor authentication—already set up,” Dr. Cohen said. “Being a thin client, Chrome has been the perfect platform for kiddoEMR, doing all the heavy lifting and allowing our code to liberate itself.” 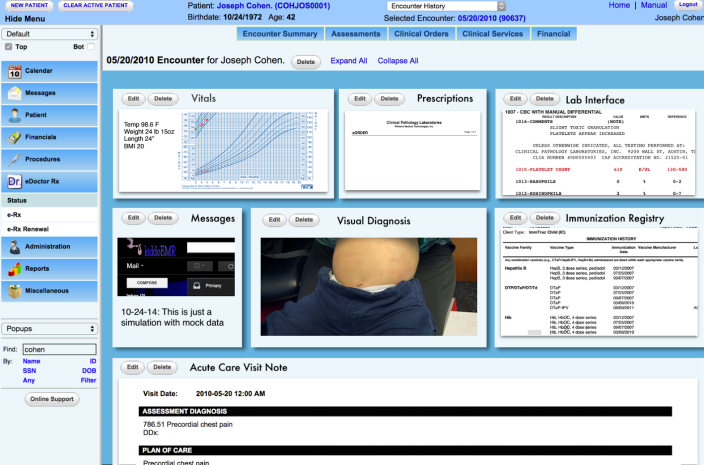 While Google technologies are definitely part of making this happen, though, Dr. Cohen says that Glass needs to be better before he can really expect the average doctor to use it on a daily basis. Even when he strips everything away and puts together proprietary units made specifically to run kiddoEMR, doctors can only get about half of a day’s worth of use before needing to dock the device to charge up. “I could see Glass becoming even more useful when we can record more video without worrying about battery, but right now it’s simply not good enough,” Cohen says, “especially while the device costs $1,500.” Meanwhile, Dr. Joe says that he’s in the process of maybe designing an Android Wear app, but that the obvious benefits of a head-worn camera would be sadly absent.

Dr. Joe and kiddoEMR might be in luck, at least as it goes with Glass, as it was reported by the Wall Street Journal a few months ago that Glass would be getting a revamp at some point this year, sporting an Intel processor and much better battery life. This is also good news for Google, who very clearly has more interest in pursuing the Glass at Work program than pushing the wearable HUD to consumers. Glass at Work might very well be what keeps Glass alive while the general populace comes to an understanding of what wearable technology can do for them, and apps like kiddoEMR seem to be perfect use cases that actually prove there might be a market for a device that’s otherwise the center of mockery and jokes in popular culture.

Dr. Joe says to check out his website if you want to learn more. Among the groups that have signed on this week are Stephen F. Austin clinics in Houston, Texas, several practices in the St. Louis area, among about 20 others who are jumping on board in the latest kiddoEMR beta push. One of the main goals is for kiddoEMR to lower costs and allow more children to get healthcare, and if even a few facilities implement this system and are able to take more medicaid-backed children, Dr. Cohen sees it as a great benefit to society and the future of the country’s health. “Making the lives of pediatricians just a little easier by way of Google’s latest gadgets is just a bonus,” he said.