IDC: Xiaomi’s growth tops Samsung in China, but Apple is making a dent too

According to the latest numbers from IDC, Xiaomi—the rising star of the smartphone industry—has managed to pass up Samsung in China. In 2013, Xiaomi trailed Samsung’s almost 19% market share by a solid 13 percentage points (at just 5.3%), and was only the 5th largest maker of smartphones in China. Things changed in 2014. Last year, Xiaomi finished off with 12.5% of the market, almost a half-point more than Samsung at 12.1%, taking the top spot and passing not just Samsung, but Lenovo, Huawei, and Coolpad as well…

Interestingly, though, the latest numbers also show that Apple’s launch of the iPhone 6 and 6 Plus contributed to a decent size dent in both Samsung and Xiaomi’s market footprint in Q4 of last year. Apple’s market share grew from 5% to 12.3% in one quarter, while Xiaomi fell by 1.1% and Samsung fell by 3.1% over that same time period. Year over year, Samsung was down to 7.9% share compared to 18.8% in Q3 of 2013—coming out to a -49.9% growth over just 12 months.

Recently, Xiaomi held an event in San Francisco, and while it didn’t come with the launch of any of the company’s flagship products on American soil, the point of it was to introduce the brand to North America. The company is planning to bring its Mi.com marketplace website to the US before the end of the year, but for now the only thing you’ll be able to buy are accessories—like fitness trackers, power packs, and headphones. 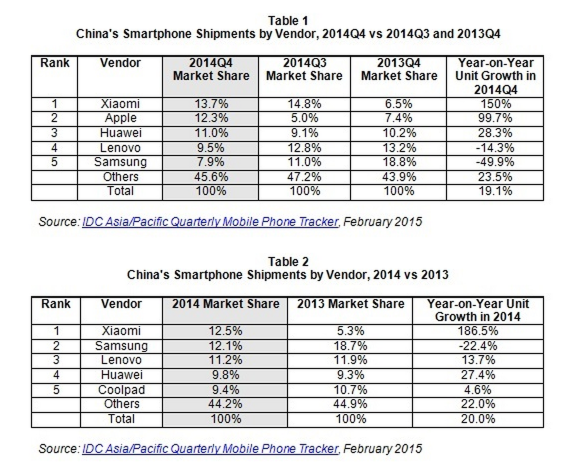