Google is working on a redesigned desktop video player that takes its influence from the site’s mobile applications, a new report suggests. The player, seen above and below, features transparent playback controls overlayed directly on the video rather than the opaque black bar we’ve gotten used to over the past few years.

Like the current player, the controls disappear after a few seconds, leaving the full space dedicated to the video. Controls for settings like autoplay on playlists, annotations, and video speed and quality have also gotten a bit of a makeover, as seen below. 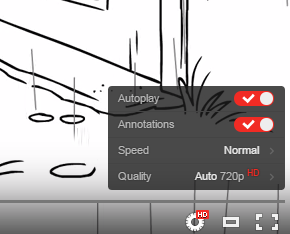 One notable omission in the new design: the “watch later” button, which allows users to save videos to a list for later viewing.

The change doesn’t seem to be rolling out to everyone just yet, but you can take it for a test drive by following some simple instructions (which seem to require the Chrome browser). When or if this design will become the new standard is unknown.