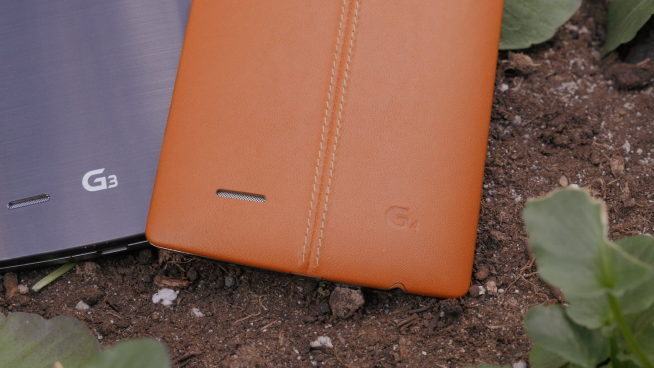 LG is back at it again and today we’re taking a quick look at the G4 with a brief comparison to its predecessor the G3. LG’s G4 takes on a similar look and feel as the G3, but everything feels a bit more refined. I’m a big fan of how it feels in the hand and even though it’s technically a bit taller than the G3, it doesn’t seem to affect the overall experience.

As far as specifications, the G4 features a 5.5-inch Quad HD (2560 x 1440) IPS Quantum display, which is the same in size and resolution as its predecessor. The display has a very slight curve, but nothing near the G Flex series. Along with that, we have a Qualcomm Snapdragon 808 processor (dual-core 1.8Ghz and a quad-core 1.44), the Adreno 418 GPU, and 3GB of RAM…

The display is crisp and clear and I’ve always been a fan of LG displays, but we’ll see how it fares in the full review and how it affects battery life with LG’s CPU choice. Speaking of battery life, inside of the G4 you’ll find a 3,000 mAh battery which is removable and once the back is removed you’ll find the micro SIM card slot and a place to hold a micro SD card and expand the 32GB of internal storage up to 2TB. Yes, you heard that.. 2 freaking TB.

On the back side we have a 16MP camera with an aperture of f1.8 wit the Laser AF that was first introduced with the G3, but along with that we also have improved OIS with a wider range. The G4’s camera also includes a new Color Spectrum sensor that will read RBG data and IR light from the camera to produce a better looking picture with accurate white balance.

Check out our LG G4 hands-on video below:

LG’s new camera software also includes a new mode with full manual access to the shutter speed, white balance, focus, ISO, and other helpful tools. Also, around the front side, we have an 8MP selfie shooter. There’s a lot that we’re excited to check out with this camera and it certainly seems like an upgrade over the 13MP shooter from the G3.

The software experience has been good overall and the animations and scrolls are fluid. The G4 is running Android 5.1 Lollipop out of the box and LG’s new UX 4.0 looks similar to last years version, but with refinements in the right places. I’ll detail the software more in the full review, but overall there’s not much different to see here aside from some minimal changes to the interface.

So that about wraps it up for now. We’ll be spending a lot of time with the G4 over the next week or so and report back with a full review. Meanwhile, what would you like to know about the G4? Drop us a comment below and we’ll try to cover it in the full review.