AppChat heard you like apps, so it lets you chat about your apps in its app

AppChat is a really interesting new app. First released just a week ago in a humble thread on XDA-Developers, the app—which creates little chatrooms for all of your currently-installed apps—has seen the creation of almost 80,000 of these rooms and more than 70,000 messages sent within them. The response has been pretty big, and the app has gone through 6 releases over the last week to make the experience as great as possible.

But what exactly is AppChat?

It’s a novel idea. Actually, it’s a new idea, and that’s not something that often hits the app stores these days. With such a saturated market of applications and games, it’s becoming harder and harder as the days go by for developers to release something that’s actually original. The most obvious example is flashlight apps, but so many app ideas have already been tried that a developer can spend months building out an intricate utility app only be forgotten within a week. Entire social networks are born on a seemingly daily basis, and they die before even having a few hundred users.

But AppChat is an original idea—and, to boot, it’s one that at the moment is beautifully Android-exclusive; the app wouldn’t be nearly as feature-complete in Apple’s closed ecosystem. It might be possible on iOS, but a lot of the cool features that make AppChat interesting definitely wouldn’t. 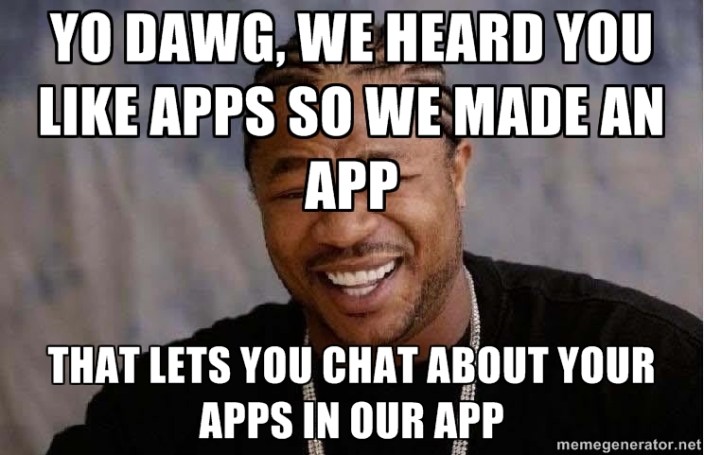 When you first open up the app (and after you’ve quickly created an account), you’ll see a list of chatrooms populated with all the apps you have installed. The ones that have the most users currently within them will land at the top, and a little green badge will tell you how many messages you’ve missed since you were last in the room. You can even star rooms that you might want to keep at the top. As for the chat rooms themselves, you can actually star messages, too—and view a list of the most starred messages.

When you’re actually in an app that you might want to chat about, the chatroom is always just a tap away. Sliding in the from the bottom-right from within any app on your device will show you menu with a couple of options: you can take a screenshot of the current state of your app (a high score screen, a bug that annoys you, or anything else) and automatically post it to the room, or you can just tap another button to jump over to the room itself. Moving back to the app you’re in is always just a couple taps with the multitasking screen away.

The developers behind the app have been astounded by the response, and they say they’re working to bring lots of helpful new features. Friend lists, chat rooms for the different phone manufacturers, and “improvements to the core experience” are just a few things that are supposedly on the way in the near future. Until then, you can grab the AppChat app on the Play Store for free. It’s still in alpha at this point, though, so you should probably treat it as such.