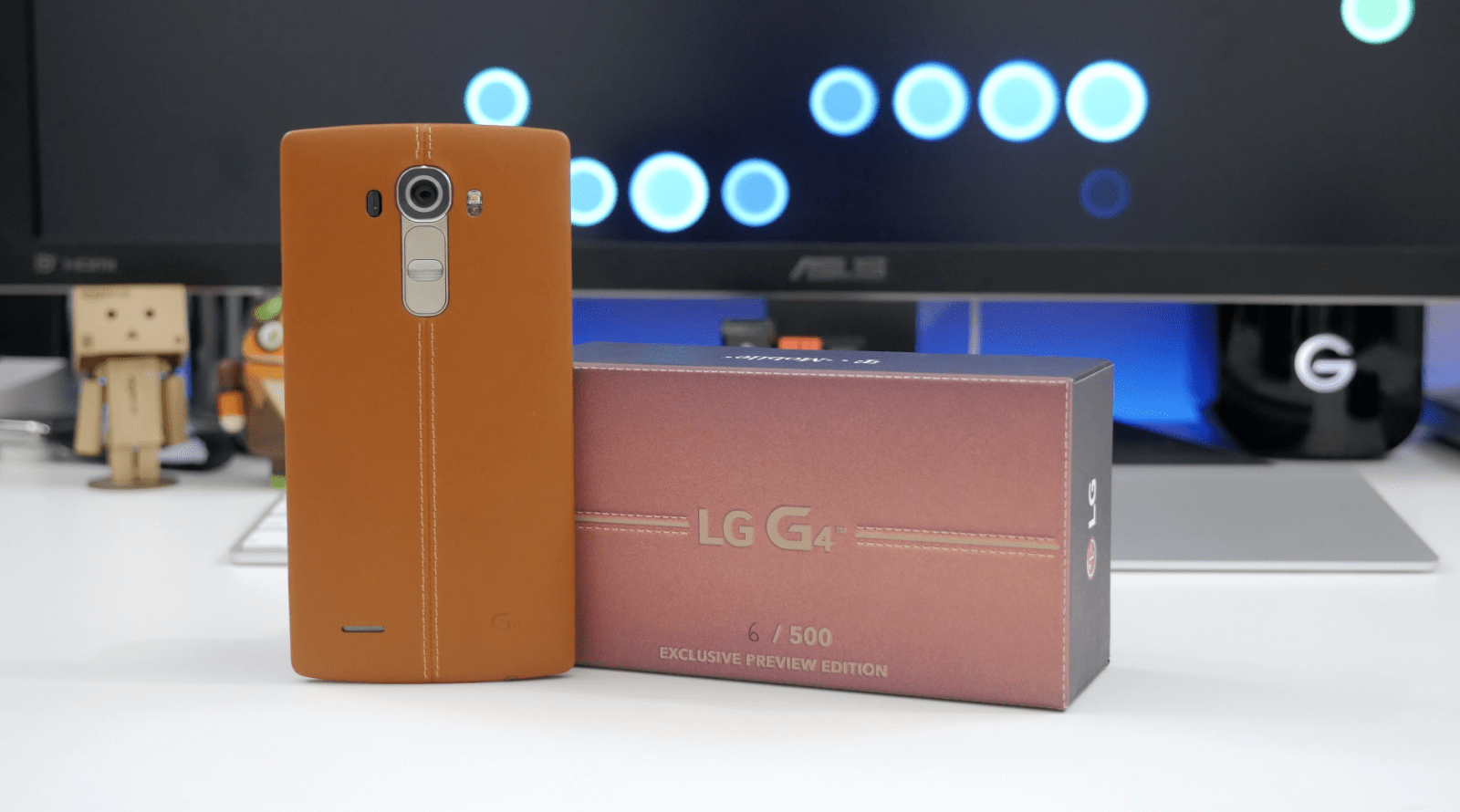 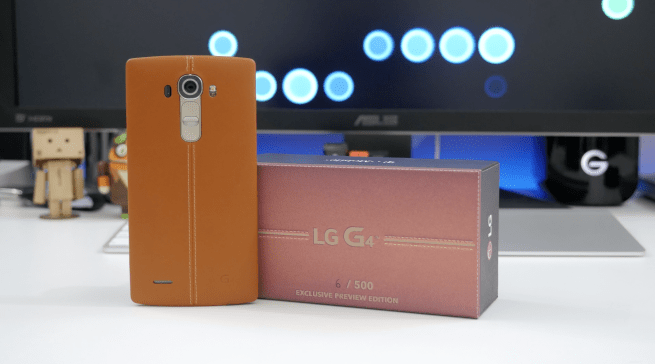 LG may be late to the game as far as smartphone releases go, but the G4 is finally here and it’s ready to take on the competition. I’ve been using a T-Mobile variant of the G4 for a little over a week now as my daily driver, and it’s been a very pleasant experience. If you’ve been holding out for a smartphone upgrade, this is definitely one to consider….

The G4 may not be radically different from its predecessor, but the changes LG made here are great ones. Inside of the G4 you’ll find a Qualcomm Snapdragon 808 processor (dual-core 1.8Ghz and a quad-core 1.44), the Adreno 418 GPU, a 3,000mAh battery (though my T-Mobile version has a 2,900mAh battery) and 3GB of RAM.

While the display size and resolution are the same as the LG G3 at 5.5-inches and a QHD display, the G4 steps up in brightness and color: it has a 2560 x 1440 IPS Quantum display that is very rich in color, brightness, and contrast, with an overall look that’s absolutely stunning. If this were an AMOLED display, it would definitely beat the Galaxy S6, but it’s still fantastic nonetheless. The display also has a slight curve, which is nothing like what you’ll find on the G Flex series, but a nice comfortable curve that just feels better than a flat display.

The G4 takes on a slightly different design this time around and is a bit taller than its predecessor. These may not be drastic changes, but I’m still a big fan. The dark metallic sides may prove to be scratch magnets over time, but add a little bling, and the leather version I have feels fantastic in the hand. I’m not usually a fan of leather-backed phones and I’m still debating on whether or not I like the brown leather version, but it definitely beats plastic. I’d still prefer black leather over anything else.

The thing about leather is that it will wear over time. It’ll eventually get to the point where it looks awesomely distressed, but that’s what leather does and I’m totally okay with it. I was impressed with the level of detail on the backside: the stitching on the back is actually real, and everything down to the G4 imprint was on point. 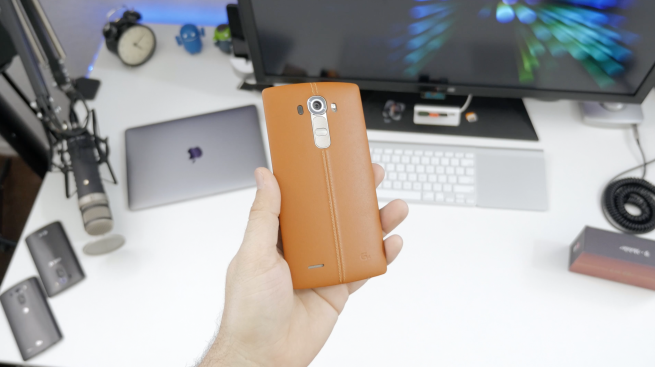 If that aged leather look begins to annoy you, the G4 has a removable back, so you should be able to pick up different back covers to swap out as you please. Under that back cover we have access to the removable battery, Micro SIM card, and Micro SD card. LG’s G4 also has a rear facing speaker which isn’t the best placement in my opinion, but it’s decently loud. We also have LG’s famous button layout, which I definitely prefer compared to side buttons, but if you’re new to them it may take a bit to get used to.

Right above those buttons is the main attraction of the G4, in my opinion: a 16-megapixel camera with OIS 2.0 that stabilizes on the X, Y, and Z-axes. LG stuck with the Laser Auto-Focus introduced with the G3 and has also included a new Color Spectrum sensor that’s said to improve on white balance and color accuracy. There’s also an LED flash here, but with an f/1.8 aperture and a larger sensor, you may not need it as much as you’re used to.

Pictures from the G4 are fantastic. I previously said that the S6 has the best camera on an Android phone, but as of now, the G4 has the best camera on any smartphone. These pictures are excellent: every picture here was taken in auto mode and the Laser Auto-Focus works like a charm most of the time. The pictures are so detailed that you could easily zoom in and make another picture from a crop. If you’d like to see full resolution photos from this review, check out the gallery linked below. Even in auto mode, this camera is the best around, but that’s not where it ends. 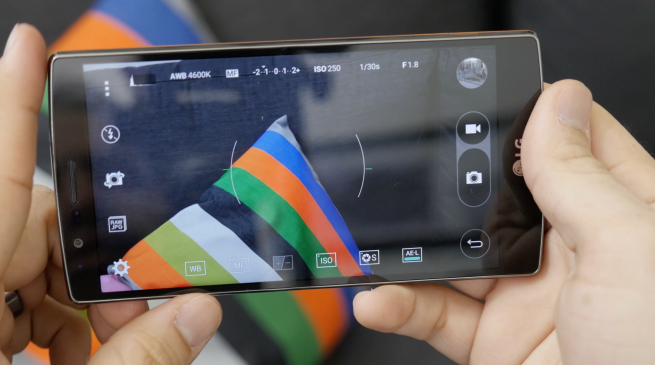 LG has also implemented DSLR-like controls within the camera app. You can manually adjust things like the ISO, shutter speed, exposure compensation, focus, and white balance. For fine-tuned editing, the G4 also allows you to shoot RAW and take the photos back to your favorite editing app for more control. There’s also a pretty good 8-megapixel front-facing camera for selfie enthusiasts.

With a double press of the volume down button while the phone is locked, you can quickly open the camera and snap a picture. By default, the camera will open and instantly take a picture which isn’t really ideal, but luckily the settings can be adjusted to simply launch the camera app. It’s pretty quick as well and with the camera quality here, it’s easy to get the shot you wanted the first time. 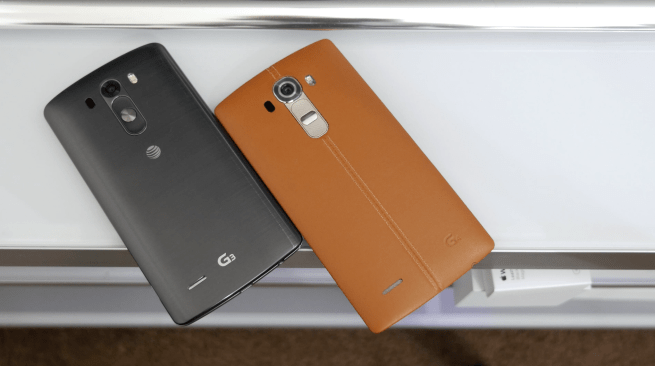 This camera also shoots up to UHD quality video and it does a pretty good job with that. The OIS is a bit too aggressive when moving around and walking, but with a steady hand you can capture some great video. Check out our review video if you’d like to see some sample footage from the G4.

If you’ve experienced Lollipop on the G3, there’s not much of a difference with the G4. Slight design changes with the interface are present, but mostly everything is the same. The G4 runs Android 5.1 like a boss: everything is buttery smooth. I’m honestly not a huge fan of LG’s Android skin, but it’s not horrible. There are stock elements here and there, but mostly what you see is part of the skin. 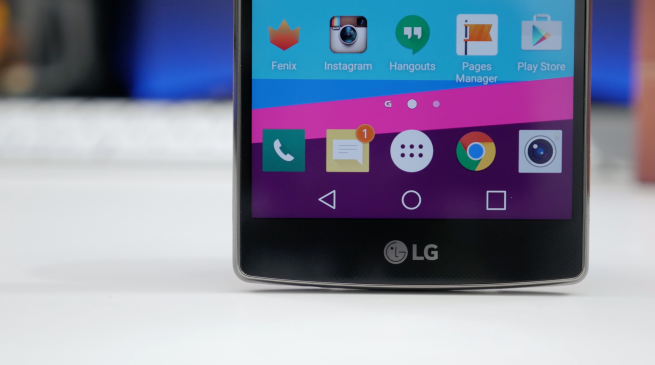 LG’s dual window feature is still present, but it only works with a handful of apps. I’ve always been a fan of LG’s quick reply windows, which are still here, but most everything here has just been carried over from the Lollipop release for the G3. That’s not a bad thing in any way. The G4 handles tasks with ease and the Snapdragon 808 processor is plenty for everything you’d need.

There’s also a neat quick glance feature with the G4. If you swipe down from the top of the screen and hold while it’s locked you can glance at the date, time, and any pending notifications on the top bar — nothing incredible, but helpful. Overall, performance is definitely on point with the LG G4. I’d love to see a Google Play version, but I don’t think we’ll see that happen unless it’s an unofficial port.

Battery life has been pretty good for me. This G4 is running on the T-Mobile network, and I’ve been using this device between the East and West Coasts over the last week, with screen-on time up to 4.5 hours. It’s not the best, but pretty good in my opinion given the screen resolution. The good news is that this battery can be swapped out whenever needed, unlike other 2015 flagships. Unfortunately, the G3 battery doesn’t fit, but I’m still happy to have the option of swapping batteries if I ever choose to do so.

With average usage on my part, I had no trouble making it from morning until night with the G4. If you’re a heavy user, you may want to pick up a second battery to have on deck because the G4 doesn’t feature Qualcomm’s Quick Charge capabilities, nor does it ship with built-in wireless charging (at least with my unit). LG will offer back replacements and cases to enable this feature.

At the end of the day, the G4 is an excellent smartphone, but since it’s late to the game, many people may have already picked up a different company’s 2015 flagship. If you haven’t upgraded yet, I’d strongly recommend the G4. It has a comfortable design, excellent display, fantastic camera, and buttery smooth software. Without a doubt, the G4 has the best camera on a smartphone right now, and that feature alone is really hard to pass up. The G4 will continue to be my daily driver from this point forward. Should you buy it? In my opinion, hell yes: this is the smartphone to compete with in 2015. If you pick one up, you’ll be as impressed as I am. Bravo, LG.