Review: Google’s Nexus 5X is a great smartphone, but not the best in its class [Video] Google’s Nexus 5X may not the best budget smartphone you can buy, but it’s the only one that will appeal to purists out there. Google’s LG-made Nexus 5X is definitely worthy of some attention, but these days it’s a tough market out there for a flagship with a midrange price. The question is, can its $379 price tag win your heart and the cash in your wallet?

The Nexus 5X is the first budget Nexus we’ve seen in quite a while, the smallest as well, and as the name suggests, it’s the sequel to the Nexus 5. With that, you’ll find a very familiar plastic build with updated internals and a few extra surprises…

Around the front, you’ll find a 5.2-inch IPS 1080p display that’s pretty crispy but the colors are obviously a little dull when compared to AMOLED displays. Inside, there’s a Snapdragon 808 processor, 2GB of RAM, and a 2,700 mAh battery.

Check out our Nexus 5X review video below:

As for software performance, this thing is on point. Of course, this is running Android 6.0 Marshmallow, and in its purest form at that. A Nexus device is the purest form of Android you’ll find and because of that you won’t deal with any bloatware, third-party customization options, or any other junk that may ruin the Android experience. There’s a nice Ambient Display mode that’s great for checking notifications on the fly. 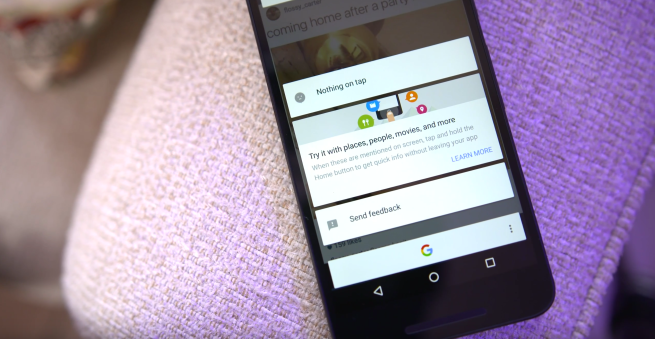 One great new feature in the software department, which isn’t really specific to Nexus devices but with Marshmallow, we have Now On Tap. It’s a pretty cool way to find relevant information based on what’s on your screen. It scans your screen for information like people, places, movies, locations, and even sometimes products, and will return instant results. It’s pretty damn helpful. There are some other new features baked in like user defined app permissions, which is super helpful, a dedicated spot at the top of the app drawer for your frequent apps, and a very special battery saving feature called Doze which we’ll get into in a little bit. I hate to say it, but there’s not much else to say here in the software department. It’s super fluid and a joy to use. It’s pure Android, what else do you need?

This year, each Nexus is equipped with Google’s new fingerprint scanner setup called Nexus Imprint. The sensor is located on the backside of the device, placed right where your index finger would naturally rest, and works like a boss. The setup process is very short and sweet as well. As expected, everything is done in the Settings app. Nexus Imprint is not only for unlocking your device, but it’s also an important part of Android Pay and restricting access to specific apps and supported features. Fingerprint sensors are nothing new, but at least it was done right the first time with the new Nexus devices.

Around the backside, you’ll find a 12.2-megapixel camera that’s capable of shooting up to 4K videos, but you probably want to stay away from that resolution. Because there’s no optical image stabilization here, it’ll be really hard to shoot UHD video from the rear camera. The good news is, the camera on the Nexus 5X is pretty good. Not the best, but definitely passable for most anything. It’s also great that the Nexus 6P sports the same sensor, so you’re not losing out on image quality going with the budget option this year. Things start to slightly break up in low-light, but the HDR+ mode definitely comes in for the win. Overall, it’s a good camera though and certainly the best we’ve seen on a Nexus device. There’s also an 8-megapixel front shooter in case you need to step up your selfie game.

Check out our camera gallery below: As for battery life, results have been pretty consistent. I can get about 3.5 to 4 hours of screen on time with the 5X, which is not fantastic, but certainly usable throughout the day. Android’s new Doze feature greatly improves standby time as well, which effectively decreases the amount of battery consumption while the phone is idle or in your pocket. It’s pretty awesome.

I wanted to keep this review short and sweet. This is a great $379 smartphone and I’m sure a lot of people will buy it, but with that said you’re probably better off springing for the new Moto X for an additional $20. It’s pretty much a no-brainer unless you absolutely need the small form factor that comes along with the Nexus 5X. This is a great smartphone, but there are a few top competitors in its space, which ultimately makes it a tough sell for Google.