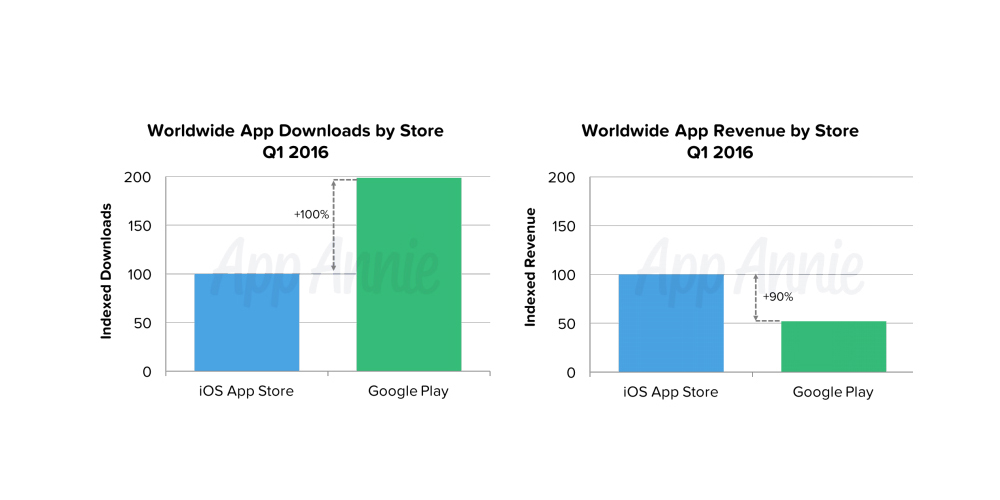 For both Google and Apple, the operations on their virtual stores are hugely important, as they account for millions of dollars. However, there has historically been a disparity between the number of downloaded applications and the actual money generated by them, a trend that seems to have peaked in the first quarter of this year.

According to App Annie‘s Index Market for Q1 of 2016, in fact, Google’s Play Store saw a number of downloads that roughly doubles that of the iOS App Store, which in turns represents the platform with the highest profitability, with over 90% more revenue generated over its counterpart…

Among the key highlights of the report, it looks like China has had a powerful impact over the App Store revenue’s growth, with an astonishing 2.2x year-on-year increase over 2015’s Q1. Part of that is attributed to China’s “legions of mobile gamers,” which helped overtake Japan in the rankings, placing China at the number one spot.

It is also mentioned how entertainment and music apps are “exploding” in both China (Tencent Video and QQ Music) and the United States (particularly Netflix and Spotify), with a boom of the subscription revenue model.

As far as the Play Store goes, emerging markets’ countries like Vietnam, Argentina and Egypt are said to be contributing hugely to the YoY growth, again thanks to Games, albeit with a mention of distinctively different tastes for each region.

The report ultimately predicts how eSports are likely going to be a huge growth factor in China across all of 2016, with cross-app integrations increasing “awareness and monetization opportunities, while also bridging the physical-mobile gap for many companies.”