Sony’s Android smartphones have never truly been the best of the best, but picking up an Xperia from time to time has always been something I’ve enjoyed. Now in 2016, Sony has ditched their Xperia Z lineup in favor of the new Xperia X lineup. This new line brings a lot of changes, but is it worth your attention? I’ve been using Sony’s Xperia X for the past several days now, and here are some of my thoughts on it.

Sony’s design language over the entire Xperia Z lineup was more or less the same: a glass front with a glass back and either plastic or metal in between. The Xperia X looks the same at a glance, but when you look a bit closer you’ll notice some slight changes.

One of the biggest changes is the removal of the glass rear panel. On the Xperia X Sony ditched the glass in exchange for a metallic rear which is, honestly, a bit of a mixed bag. Like the LG G5, the metal on this phone doesn’t quite feel like metal. It’s cold to the touch on a cool morning, but it also feels like plastic. In a way that’s a good thing since it prevents fingerprints, but at the same time it doesn’t feel very premium. The frame around the edges feels the same, but that is made of plastic, not metal. 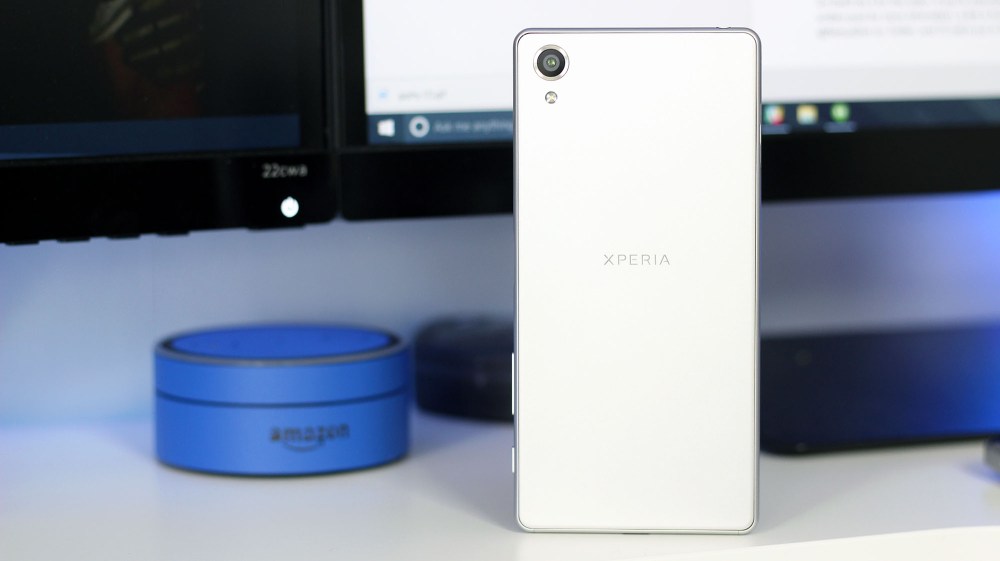 Moving around the sides you’ll notice a door for the SIM/microSD card slot on the left side. Little touches like this really make a big difference for me as switching your SIM or inserting an SD card won’t require a special tool like it does on most other devices. Moving on to the right side, you’ll find the recessed power button toward the center, the volume rocker below it, and a physical camera button. This is a setup that takes some serious getting used to. Having the volume rocker nearly at the bottom of the device is just weird in so many ways and having a power button that doesn’t stick out also feels odd if you’re coming from pretty much any other device. As for the physical camera button, Sony nailed it yet again. Perfect. Other OEMs, please take note. Cameras are really good in smartphones now. We need this more often.

Up front you’ll find a classic Sony setup. Stereo front facing speakers flank the top and bottom of the display with the front facing camera up top as well. The bezels on this phone are definitely slimmed down compared to previous options from the company, something many users will appreciate.

Interestingly Sony has also opted to place the NFC chip on this phone on the front next to the camera sensor. This is something I’ve never seen on a smartphone, but on this device is actually does make a level of sense since the back is completely made of metal and there are no antenna lines to be found.

Up top you’ll also find a 3.5mm headphone jack and a microphone while the bottom houses the microUSB charging port and another microphone.

Oh, and there’s one thing we definitely need to talk about here. Unlike Sony’s previous smartphones, the Xperia X isn’t water resistant, at all. Why? No clue.

Moving back to the front you’ll find a 5-inch, 1080p LCD display. It’s refreshing to see another solid device in this size and the display itself is solid. It doesn’t quite measure up to other devices such as the HTC 10 or Galaxy S7, but it’s very good nonetheless. 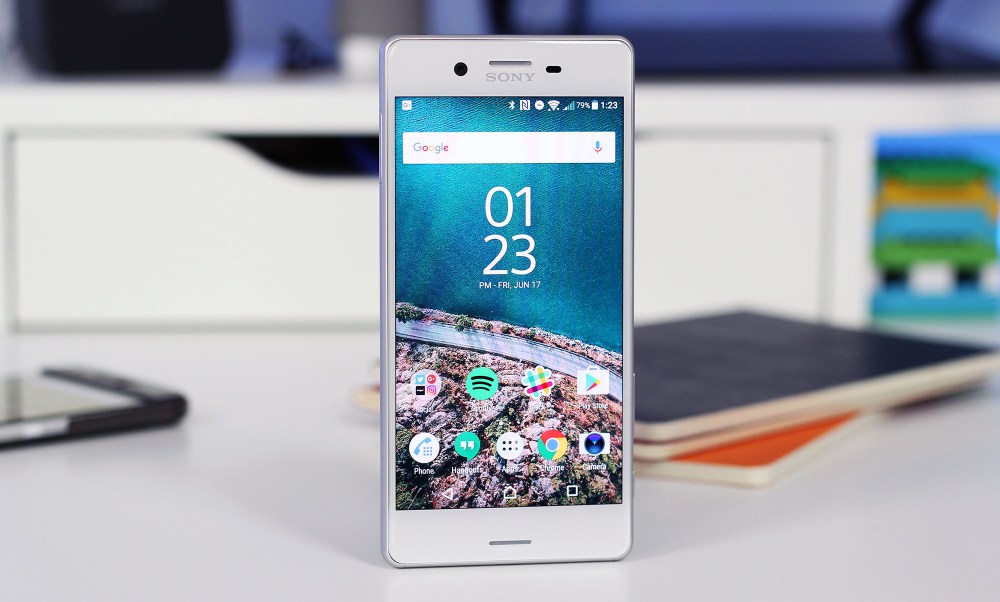 Brightness is great and colors are accurate for the most part, leaning a bit toward the warm side though. Viewing angles are also good in my experience.

Out of the box you’ll find Android 6.0.1 Marshmallow on the Xperia X with Sony’s skin on top. In this latest iteration, Sony has merged their skin even further with stock Android, making only a few minor tweaks here and there. Some of those include a quicker way to get to the quick settings by swiping down from the center of the notification bar, a few color tweaks (which I actually prefer over the colors in stock), and a new launcher.

Really I have no complaints when it comes to software on the Xperia X, but everything I could complain about is found within the launcher. Don’t get me wrong, it works, it’s good, but when a launcher recommends that you download apps like Candy Crush Saga and Clean Master, you can’t help but feel a bit upset. Luckily that’s a feature you can turn off. Another minor complaint is that out of the box the launcher isn’t organized, well, at all really. That said it’s easily to switch it to just about any sorting order you prefer.

Under the hood on the Xperia X you’ll find a Qualcomm Snapdragon 650 processor, 3GB of RAM, and 32GB of storage. During my testing period the Xperia X never had a single issue with performance. I was easily able to use the phone in standard day to day use without a hitch. Everything was smooth, fast, and overall just pleasant. Benchmarks follow. 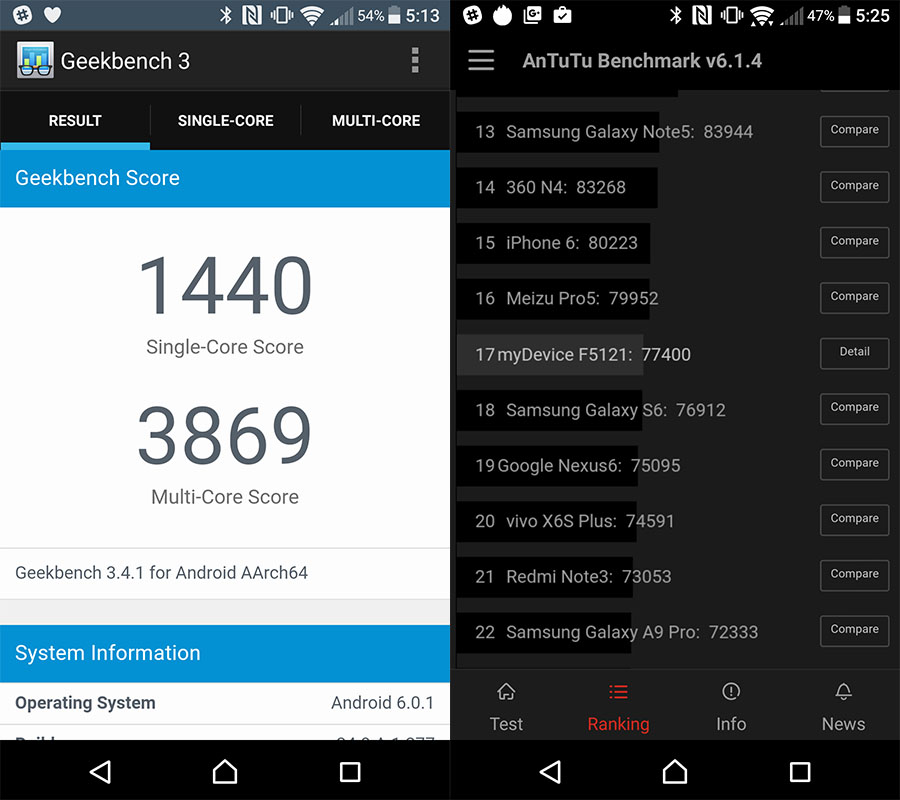 As for performance in gaming, I can’t speak all that much to it. I am more of a casual gamer on my phone and with that being the case, I never experienced any issues with games on the phone. I did notice that after about 15 minutes the phone would get a bit warm, but that’s to be expected.

The Xperia X also packs a non-removable 2,620 mAh battery under the hood. Overall, I was pretty happy with battery life on this phone. I’m not a very heavy user with my smartphone usage consisting mainly of sending a few texts throughout the day, surfing Twitter or Imgur for a few minutes here or there, or listening to music on Spotify.

For every day I spent with the X, I got through the entire day without even having to consider charging up the phone. On one day in particular I used the phone for a total of about 18 hours (between 8am and 2am) with just under 2 hours of screen on time and ended up putting it on the charger with 28% of my battery remaining.

Sony also has Qualcomm Quick Charge 2.0 on this device, promising a 60% charge in just 30 minutes. The charger included in the box is also compatible with quick charging.

On the rear of the Xperia X you’ll find a 23MP camera which is decent. Sony won’t be winning any awards here, but at the very least you won’t be disappointed with this camera. Outdoors shots of course look good, but the phone does struggle just a bit in low light where it tends to overexpose.

The sensor is certainly capable of taking good shots, but it has it’s downsides as well. First of all, there’s no OIS. This is of course a major downside for shooting video, but it doesn’t help low light shots either. Along with that, the camera is also pretty slow when you’re taking advantage of the full resolution. By default the camera is set to 8MP with a 16:9 aspect ratio. At 8MP Sony says that oversampling will help to eliminate noise and capture better colors, which it does seem to do, but cutting out so much resolution feels wrong to me, but as I said, turning it up increase the time it takes to get a shot. You’ll just have to pick the lesser of two evils on this one.

One more thing worth noting on the Xperia X is the front facing speaker setup. You’ll have two stereo speakers on the top and bottom of the display and they sound fantastic. Audio sounds very good coming out of these speakers and even at high volumes things don’t get distorted. I could do with these speakers being just a tad louder, but I’m completely fine with where they are. Headphone audio could be improved, but luckily you can use an external DAC/AMP on this device to improve things if you’re on the hunt for better audio.

What were you thinking Sony?

After spending time with the Xperia X, I don’t hesitate at all to call it a good phone. Heck, I’ll even call it great. But there are two big downsides that just slap me in the face.

First, there’s no fingerprint sensor. We live in a world where people care if a phone has a fingerprint sensor, and justifiably so. However, for what seems to be no good reason, Sony decided to ditch the fingerprint sensor on this device solely for the US model. If you pick up an international variant you’ll have a fingerprint sensor, and a pretty decent one at that, but here in the States we’re left out. Yet, we still see the same power button design. I’d really love to know why the sensor was ditched on the US variant, especially considering the price of this “mid-range” phone. 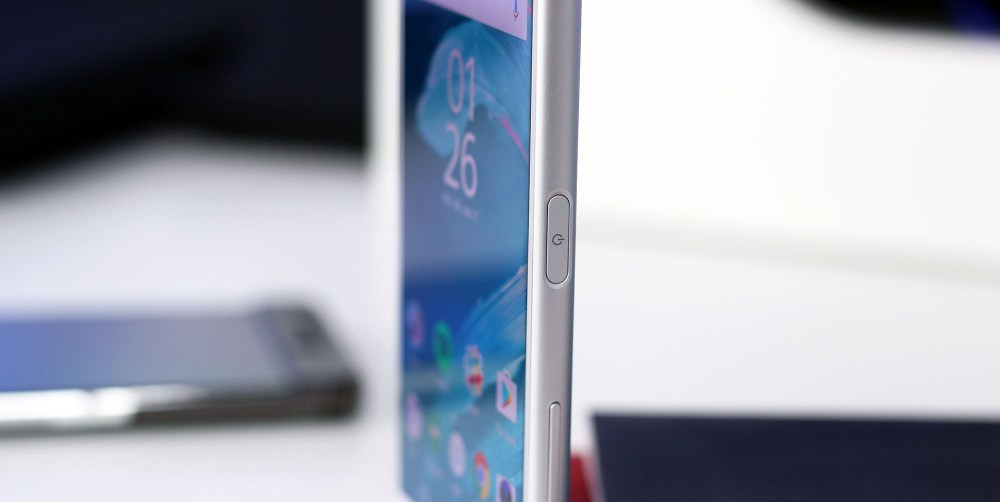 Speaking of the price, let’s have a quick chat about that. I’m not sure what world Sony thinks this is, but apparently it’s one where a decidedly mid-range smartphone is worth $550. Despite all the good things about this phone, the bad ones are just too big to forget, especially when you’re looking at the price.

If the Xperia X had a fingerprint sensor, kept the water resistant design, and fixed the issues with the camera and build, I could see this maybe being worth $399, maybe even $449. However, at $550, we’re not only getting close to, but we’re passing the price of many other flagship level smartphones. At $550, the Xperia X isn’t just overpriced, it’s hilariously, painfully overpriced. This is 2016, Sony, smartphones are cheap now, stupid cheap, and you need to get with that program.

I know I’ve been a bit harsh here at the end, but I really do think the Xperia X is a great phone. It’s not perfect by any means, but I have truly enjoyed using it. That said, I’d never buy it, or recommend it. The price on this phone is just far higher than it ever should have been. If you can snag one at a deal, maybe $400, then maybe it’d be worth it, but for now it just simply is not.

If you are interested in buying however, the Sony Xperia X is available right now on Amazon for $549.