The novelty of exploring satellite imagery of the world in Google Earth has long worn off since the app launched in 2001. Now the the company has given you a reason to dive back in and explore the Earth from above, announcing today that all mapping products, including the satellite layer in Maps, will get sharper and more detailed images thanks to a new satellite and processing techniques…

The Landsat 8 satellite — part of a joint US Geological Service and NASA program offering accessible open data — was launched in 2013 and captures images with great detail, truer colors, and more frequency. Its ability to capture twice as many images as its predecessor on a daily basis means that it is easier to find cloud-free images to stitch together.

The publicly-available Earth Engine API was used to mine data from nearly a petabyte (700 trillion individual pixels) of Landsat imagery to find cloud-free images, and other processing techniques were used to to get sharper images than ever before, resulting in what Google says is the “freshest global mosaic to date.” Check out this quick comparison (old on top): 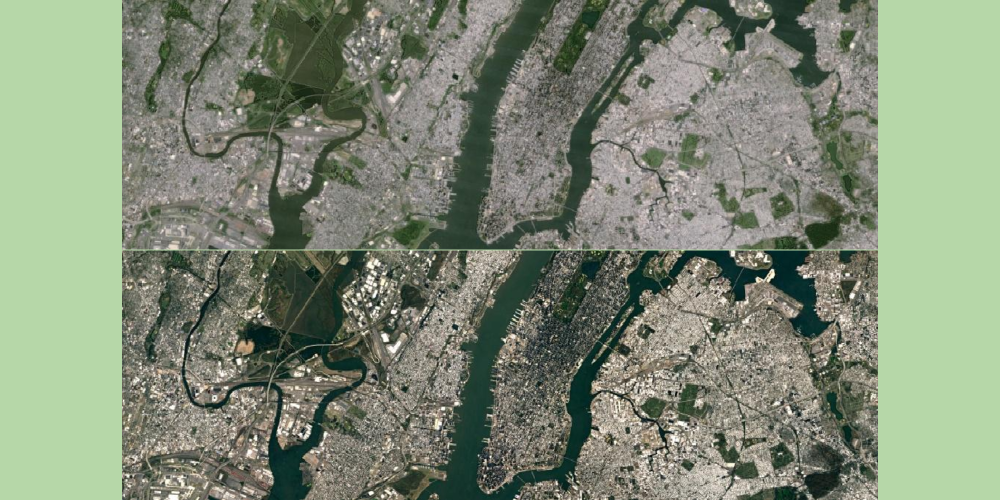 The newest rendition of Earth uses the most recent data available from Landsat 8 when available, and this new imagery is now available across all of Google’s mapping products, including the satellite layer in Google Maps and of course Google Earth.

Google does not rely on these images alone, and that’s a good thing considering that Landsat 7 suffered a hardware failure in 2013 that compromised many images. As such, the company is also exploring building and launching its own imaging satellites as part of its Terra Bella subsidiary.