Google removed over 1.7 billion ‘bad ads’ in 2016, cracking down on clickbait and scammers

In a world full of fake news, clickbait headlines, and online scammers, Google is working hard to only display legitimate and trustworthy advertisements on its massive ad network. To achieve this, Google removed over 1.7 billion “bad ads” in 2016 — more than double the number of ads taken down in 2015…

Google made two changes to Adwords in 2016. The first was an update to its advertisement policy which banned payday loan ads as these typically scammed users into high-interest loans with payments that they couldn’t afford. Since the policy change, Google was able to disable over 5 million payday loan ads.

The second change was an update in the technology used to automatically spot bad ads. Specifically, Google started to target “trick to click” advertisements which would show fake system warnings and trick users into thinking the message from coming from their devices. In 2016, Google was able to remove over 112 million of these harmful advertisements.

Google also went after advertisements that promoted illegal products (including pharmaceuticals), online gambling, and mislead users. These together accounted for over 165 million bad ads.

Google noted that self-clicking advertisements on mobile had grown exponentially. These ads are the type that automatically forward you to another website that could potentially be harmful (and are annoying at the very least). In 2015, Google identified and removed only a couple thousand of these self-clicking ads but in 2016, over 23 thousand had to be taken down. 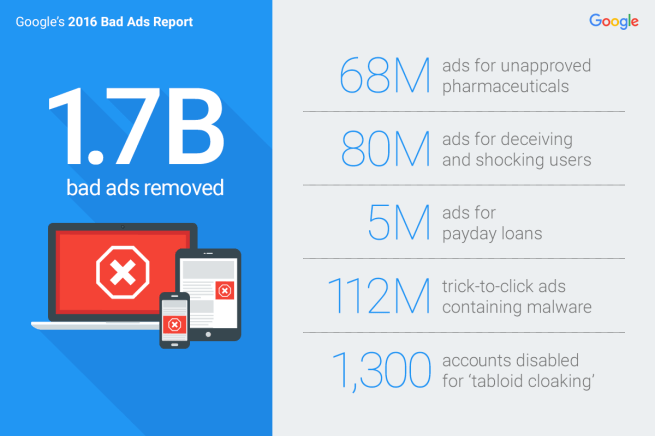 Sometimes just taking down an ad isn’t enough, though. In 2016, Google had to start banning advertisers who were publishing “tabloid cloaker” ads. To paraphrase Google, these advertisers create ads that look like news headlines and then place these ads on different publications. Users, thinking that they are clicking to read another story, then get forwarded to a spam website that would attempt to sell them some sort of product. Over 1,300 accounts were suspended for tabloid cloaking.

Lastly, Google is also cracking down on the websites that use the Adsense platform. Google does not permit its ads to be shown on sites that display weight-loss scams, unwanted software, or sell counterfeit items. Altogether, over 68 thousand sites were banned or had their Adsense account suspected for being in violation of one these policies.

Google isn’t going to stop there, though. Knowing full well that scammers will continue to attempt to get around their safeguards, Google will continue to invest in technology to help detect and stop malicious advertisements. Additionally, Google supports different efforts such as the Coalition for Better Ads in hopes that ads will get better for both publishers and consumers.