The California Department of Motor Vehicles published its Autonomous Vehicle Disengagement Reports for 2016 today, which include statistics on disengagements for all of the companies currently testing self-driving cars in the Golden State. Importantly, Alphabet’s Waymo reported far fewer safety-related disengages and far more miles driven in 2016 compared to 2015, signaling that the company’s system is — as it should — continually getting safer…

“Disengages are a natural part of the testing process and occur when a driver takes manual control of a vehicle while it is in autonomous mode,” Google wrote in a Medium blog post to go along with today’s new stats. For the uninitiated, these disengages are part of the normal testing process, which allows Waymo to “add to [its] software’s driving skills, expand hardware capabilities, and identify areas of improvement.”

Since 2015, Waymo’s rate of safety-related disengages has dropped from 0.8 disengages (which is still crazy low, below one) per thousand miles in 2015 to 0.2 per thousand miles last year. And this occurred even considering that Google increased its total driving to 635,868 miles  from 424,331 miles in 2015. In total, the number of “reportable disengages” fell from last year’s 341 to 124. 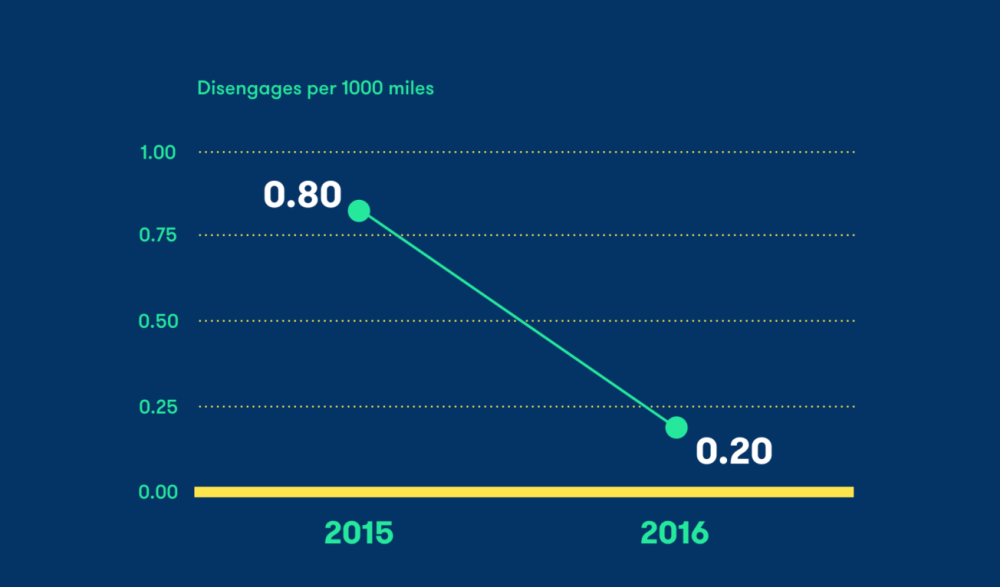 Back in December, Google spun off its self-driving car project to an Alphabet company called ‘Waymo’, which reset the company’s sights on building a self-driving hardware and software suite to be used by car manufacturers rather than entire self-driving cars. This was followed by reports that Honda was in talks with Waymo to use its self-driving car technology. And most recently, we learned that Waymo started testing its new sensor suite last month.