Google has today announced the LG Watch Style and LG Watch Sport, the latest smartwatches that run Android Wear. At first glance they may not look all that special, but when you dig in you’ll see that there’s a lot to want here: They’re the first watches to run Android Wear 2.0 (which packs a plethora of new features), the larger of the two will support NFC for Android Pay payments, they both have rotating crowns for a completely new way to interact with Google’s smartwatch platform, and more…

There’s a bit of a backstory to today’s announcement. Android Wear 2.0 was originally expected to launch in the fall of last year after its preview which first debuted at Google I/O 2016, but that obviously didn’t happen — Google cited “quality requirements” as the reason for the delay. Now we’re here, Android Wear has had some time to bake a little bit, and Google — along with its partner, LG — is launching a couple co-designed watches “Nexus” style.

Both watches have 1.1GHz Snapdragon Wear 2100 processors, nifty new crowns that rotate to control their UI, bodies made of 316L stainless steel covered in Gorilla Glass 3, 4GB of storage space, wireless charging, Wi-Fi & Bluetooth, and three main sensors: an accelerometer, a gyroscope, and an ambient light sensor. That’s where they start to differ, however.

The first watch, the LG Watch Style, has a 1.2-inch display at a resolution of 360×360, comes in at 10.8mm thick, and will be available in three colors: “titanium,” “silver,” and “rose gold.” It’s a nice looking watch with interchangeable bands (hence the “Style” name), but it’s notably lesser powered. It forgoes Android Pay compatibility and the cellular radio, has a lesser 512MB RAM, a lightweight 240mAh battery, and IP67 water and dust resistance. 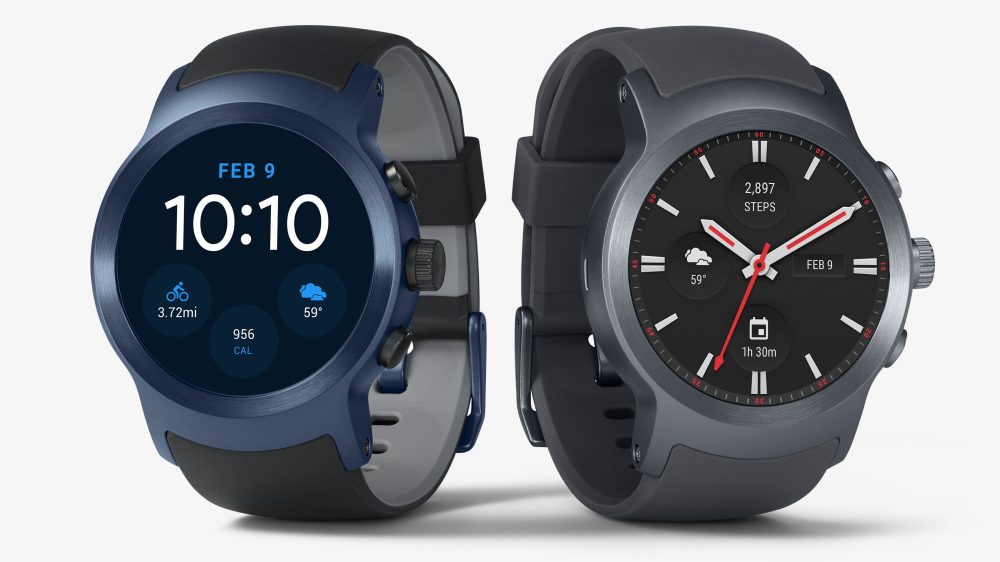 Second is the LG Watch Sport, which is definitely the “flagship” of the two. The watch has a slightly larger 1.38-inch display at a resolution of 480×480, brings IP68 certification, and will be available in two colors: “titanium” and “dark blue”. The Sport has slightly more RAM at 768MB, a thickness of 14.2mm, and a beefier 430mAh battery. That bit of extra thickness is filled with cellular radios (both 3G and LTE), as well as an NFC chip for Android Pay, support, a heart rate sensor, and GPS.

The real difference with these Android Wear watches compared to those we’ve seen before is that they run Android Wear 2.0. As I said, this was previewed all the way back at last year’s Google I/O, and the key bullet points of what it offers haven’t changed much. There’s personalizable watch faces that let you add complications from your apps, an updated Google Fit that lets you track pace, distance, calories burned and heart rate for a variety of workouts, and of course, Google Assistant.

Android Wear 2.0 also lets you download apps straight from your watch via a new on-watch Google Play Store (which will come especially in handy on LTE-enabled watches like the LG Watch Sport). This also means that if you’re an iOS user, you will have access to a lot more apps — those that previously required a paired Android phone to use. Wear 2.0 also expands the options you have for responding to messages with the option to type, use handwriting, or tap a Smart Reply.

If you’re only looking to get these new software features, however, chances are that you already have an Android Wear watch that will get the update in the coming weeks. Most of the watches released over the last two years, including the latest Moto 360, ASUS’ ZenWatch 2 & 3, the Huawei Watch, and more will all be getting these features in a coming over-the-air update.

The LG Watch Style and LG Watch Sport will both of course be available on the Google Store, but the Style will also be available at Best Buy and the Sport will have variants available at Verizon and AT&T retail stores. If you want to grab the LTE-enabled LG Watch Sport but don’t have Verizon or AT&T, the version that’s available on the Google Store simply needs a SIM card and you’re good to go. You’ll be able to buy them in the US both online and at retail on February 10th, and Google says they’re coming to Canada, Russia, Saudi Arabia, South Africa, South Korea, Taiwan, UAE and U.K. soon.