Google Translate received a minor update today to version 5.8, bringing easy-to-access definitions for translated words, a quick account switcher like that found in most of Google’s other first-party Android apps, some new strings referencing China, and (assumably) the usual bug fixes…

The most interesting and notable new feature here is the new definitions section on the “Home” translate page. With version 5.8, you can enter a word to be translated, and a new “Definitions” section appears at the bottom of the page below the usual “Alternate translations” section.

For now, the feature seems pretty limited. For instance, translating the word “caballero” from Spanish to English will correctly translate to “gentleman” and provide definitions for that word. But if you try to translate “el caballero” (or any phrase with more than one word), the app will only provide the direct translation and no other information. 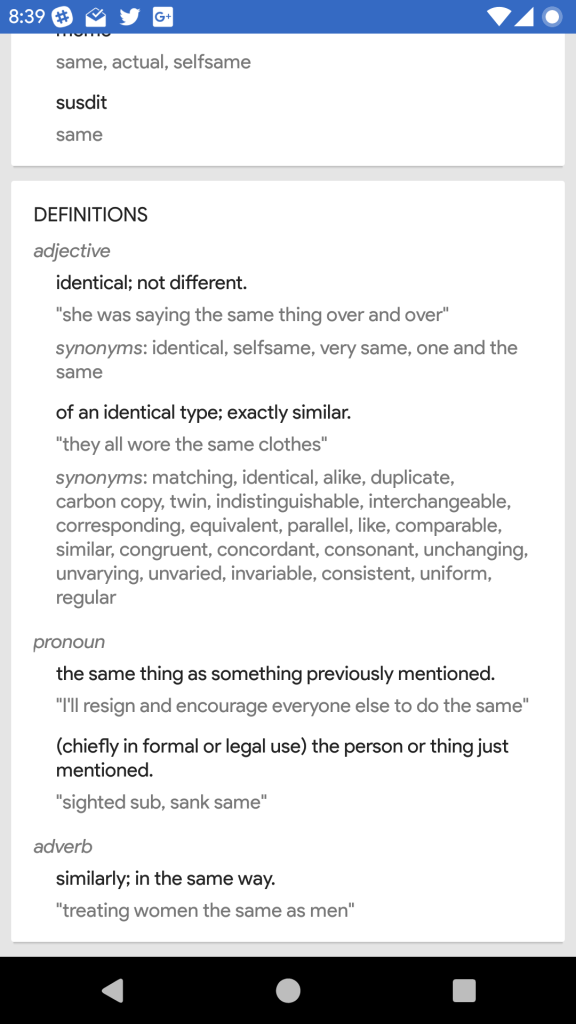 Most Google apps at this point have a quick account switcher, but until today, Google Translate was one of the few that didn’t (see comparison below). In Google Translate 5.8, you can open the hamburger menu and change accounts just as you would in apps like Google+ or Gmail.

The benefit of this is that you can easily switch between your Translate data separated across different accounts, such as personal and Google Apps work accounts. Google Translate has some features that are more complex than just straight translations (for example, the ability to save Translations to your “Phrasebook”), and now you can switch between your different sets of data with a single tap.

We also found some new strings relating to China, but we’re not sure exactly what they mean at this point (we’ll update this post if/when we find out).

Beyond these things, it’s pretty easy to assume that this app also packs the usual bug fixes that pretty much every app update has. You can get Google Translate 5.8 on the Play Store (it should be rolling out right now), and if it’s not quite available, you can also grab it from APKMirror.