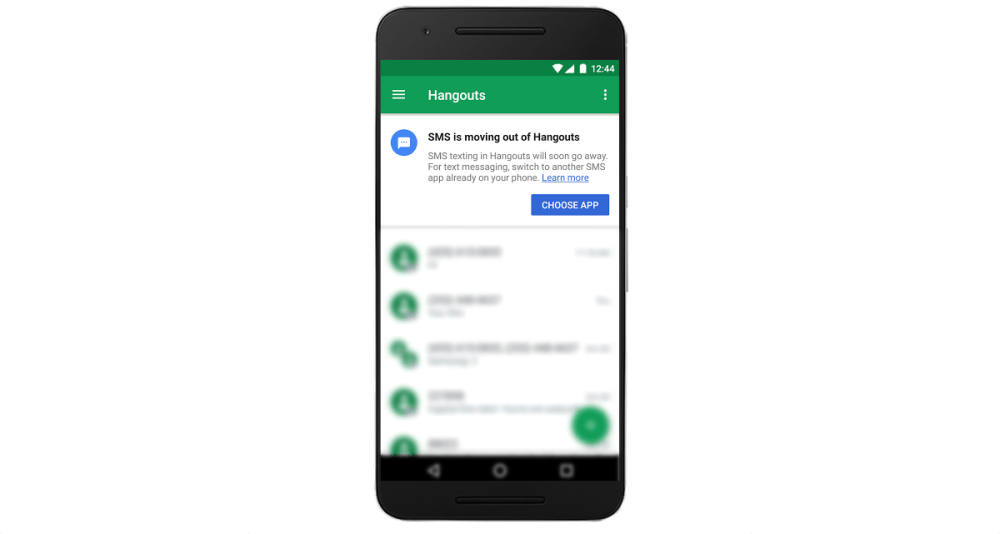 Google announced last week that it intends to deprecate SMS functionality in Hangouts, and now an update is rolling out which prepares users of the messaging platform to switch SMS apps. Hangouts 18 doesn’t seem to have any functional changes, but it does add the necessary components to help educate users on the forthcoming transition…

As is often the case with changes to Google’s apps, the company is going to make sure current users are aware of the coming changes before pulling the plug on May 27th. For this purpose, there are strings in the app for a banner that will be appearing in Hangouts 18 and later telling users that “SMS is moving out of Hangouts” and suggests that users “switch to another SMS app already on your phone.”

You can see what the banner looks like above, but we’re not seeing it on any of our devices at this point. Google will likely be enabling it via a server-side switch in the coming days or weeks.

The strings also detail something else Google touched on previously — that Project Fi and Google Voice users will be exempted from these changes, and still be able to use SMS in Hangouts as they have up to this point. “Google Voice texting will still be available in Hangouts,” the strings say.

The banner will also apparently help you find and choose the default SMS app that you decide to switch to.

We also found a new string which suggests USB heaphones are now an option for audio output:

Hangouts 18 is rolling out via the Play Store right now, but there’s no reason to be anxious for it since it doesn’t really pack any functional changes. If you want (and know what you’re doing), however, you can manually download and install the latest version of Hangouts from APKMirror. You can also head over to our coverage from last week to read more about the changes coming to Hangouts.