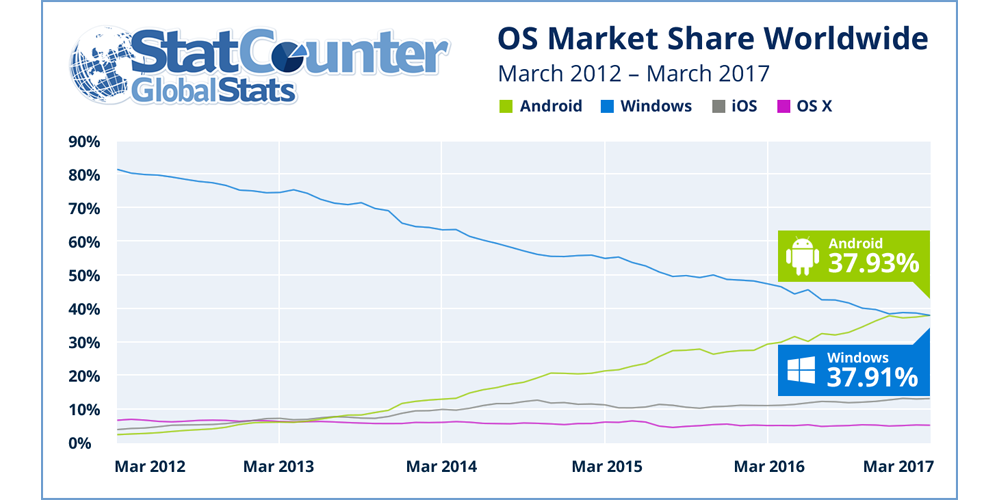 Android has now overtaken Windows to become the world’s most popular operating system, according to data from Statcounter. Looking at combined usage across desktop, laptop, tablet and smartphone, Android usage hit 37.93%, narrowly edging out Windows’ 37.91%.

“This is a milestone in technology history and the end of an era,” commented Aodhan Cullen, CEO, StatCounter.  “It marks the end of Microsoft’s leadership worldwide of the OS market which it has held since the 1980s.  It also represents a major breakthrough for Android which held just 2.4% of global internet usage share only five years ago.”

The milestone was hit last month, after coming close in February. There are, though, a few points to note …

First, and more trivially, Statcounter only measures Internet-connected devices, which will exclude a small number of desktop PCs used for specialist tasks. Second, and more significantly, Windows still dominates PCs, both desktop and laptop, with an 84% share.

But this, says Statcounter, isn’t the significant measurement any more.

“Windows won the desktop war but the battlefield moved on,” said Cullen. “It will be difficult for Microsoft to make inroads in mobile but the next paradigm shift might give it the opportunity to regain dominance. That could be in Augmented Reality, AI, Voice or Continuum (a product that aims to replace a desktop and smartphone with a single Microsoft powered phone).”

It’s also very much driven by geography, Windows still holding a 39.5% share against Android’s 25.7% in North America, and 51.7% against 29.2% in Europe. The huge gains made by Android over the past few years have been predominantly in Asia, where many have skipped the PC stage altogether and gone straight to a mobile device.