With Malta, Alphabet’s X is exploring a salt-based solution to store renewable energy

While clean energy is not a new area for Alphabet’s X, the moonshot division has previously only focused on energy creation. With a new “exploration” called Malta, Alphabet is now looking at cost-effective energy storage solutions.

“Explorations” are X’s “early-stage attempts to investigate new moonshots.” Energy storage is increasingly falling into that category as companies like Tesla are building battery-centered solutions to capture energy from renewable resources.

X is instead “developing a thermal storage system that uses salt to store renewable energy at scale.” Malta is specifically tackling the “mismatch” between the abundance of renewable energy from wind and solar and the lack of cost-effective technologies to store it, especially during peak power usage:

If there’s more energy produced than the electric grid needs, the capacity of wind and solar farms is simply wasted.

Malta’s solution is to contain just captured electricity as thermal energy. The work behind it comes from Nobel prize-winning Stanford physics professor Robert Laughlin who created as “theoretical system that stores electricity as heat (in high temperature molten salt) and cold (in a low temperature liquid similar to the antifreeze you have in your car).” 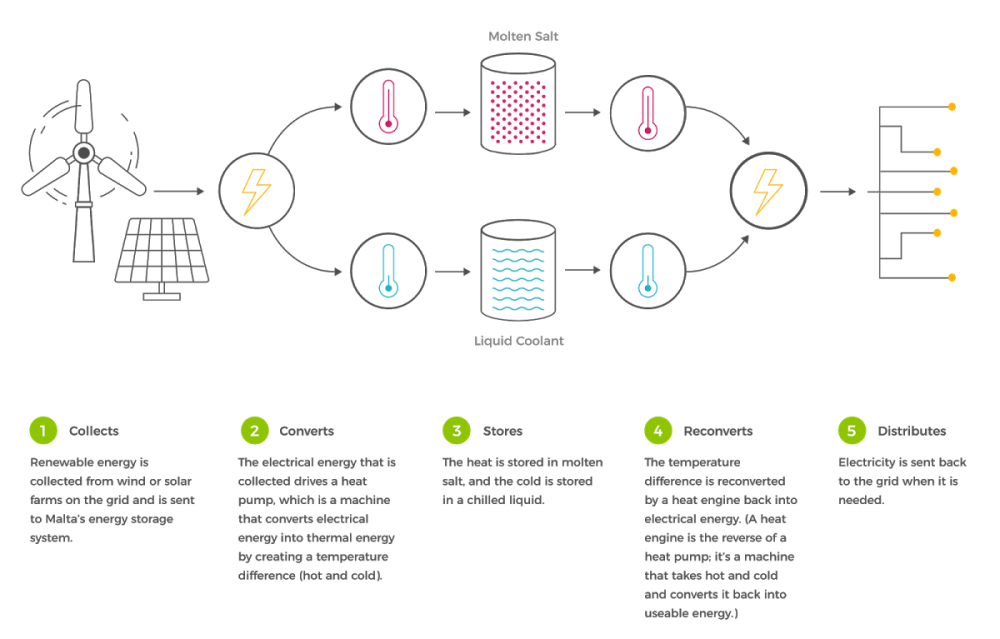 This solution has the possibility of lasting longer that lithium-ion batteries, while competing with other existing clean storage solutions in terms of price, according to X executives speaking to Bloomberg.

For two years, the X team has been trying to understand the system to evaluate whether this is a practical solution. Today, the Malta team has plans that can be turned into real machinery, as well as picked up important qualities about the system.

Their approach is composed of inexpensive components and can be used anywhere without regard for weather or location. Additionally, it is long-lasting, with salt tanks possibility lasting up to 40 years — “three or more times longer than other current storage options.”