The Google Clock app is sparingly updated, but it’s getting a major integration today with Spotify that lets users set musical alarms. The online streaming service compliments the current in-app alarm sounds and is aimed at helping users get up in the morning.

In an update that is beginning to roll out today, users will be able to connect Spotify to the Clock app, with the integration working for both Spotify Free and Premium users. Afterwards, heading to “Alarm sound” will reveal two tabs for the standard “Sounds” and now “Spotify.”

Then choose your perfect wake up music. You can browse recently played music, choose from Spotify’s curated morning playlists, or search for a specific soundtrack.

Up top is a “Recently played & selected” section, while curated playlists include “Rise and Shine.” Fortunately, there is a FAB in the bottom-right corner to perform a general search of Spotify’s library. After the alarm goes off, users will have the option to continue listening with Spotify.

In the future, YouTube Music subscribers will be able to use the company’s latest streaming offering with the Clock app. Google confirmed to 9to5Google that similar integration is arriving soon. 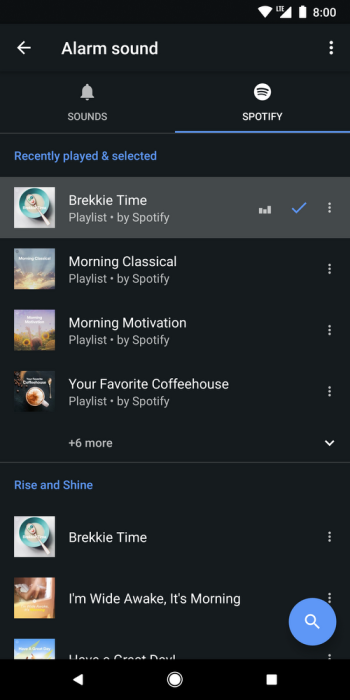 The latest versions of Spotify and the Google Clock app have to be installed, with the feature rolling out globally this week on the Play Store. While today’s blog post was penned by a member of the Pixel team, this feature is available on all devices running Android 5.0 Lollipop and above.

While the integration with Spotify reflects the dominant position of the music service, the lack of a similar feature with Play Music or even YouTube Music is surprising. Both Google-owned services, have a library of morning-themed playlists. Hopefully, the Clock app plans to integrate with both in the near future and we’ve reached out to Google for comment.

Update: A Google spokesperson has confirmed to 9to5Google that YouTube Music will add similar Google Clock integration in the future.