Earlier this month, Epic Games detailed that Fortnite would require a direct APK download and install. With the game officially launching yesterday on Samsung devices and a general Android beta opening this weekend, Google is acknowledging that the hit gaming sensation is not available through the Play Store.

Fortnite Battle Royal by Epic Games, Inc is not available on Google Play

Immediately below the message is the developer account for Epic Games that includes a listing for another app coming soon. In “More results,” the Play Store lists “PUBG Mobile” and a number of other similar games. Amusingly, the note is somewhat inaccurate in that the app’s name is actually “Fortnite Battle Royale.” Meanwhile, the note does not appear on the web version of Google Play.

This move by Google is rather consumer-friendly and possibly a means to prevent users from being tricked into installing apps that maliciously pretend to be Fortnite. The search results do feature games similar in style to Fortnite, but no scammy or dangerous copies immediately stand out. 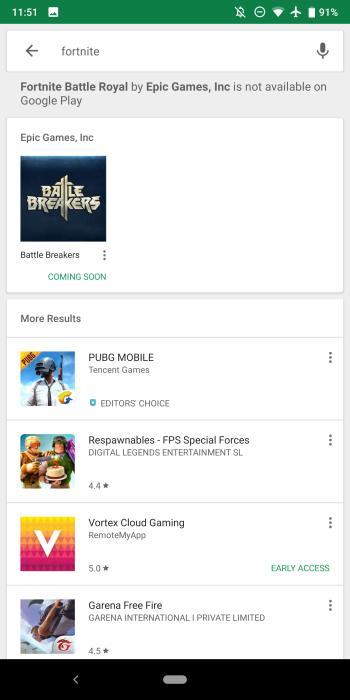 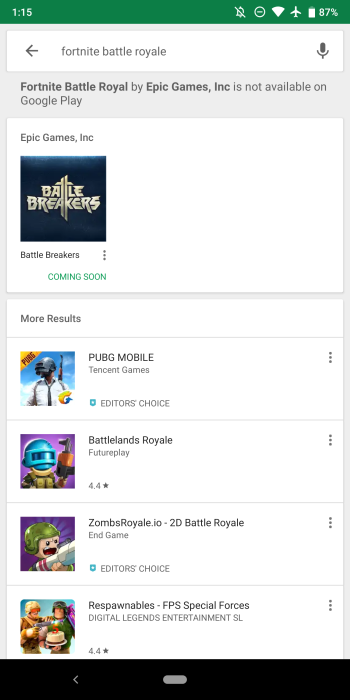 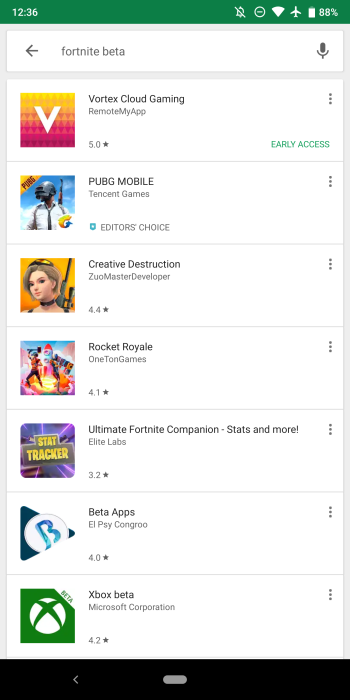 Behind-the-scenes, Google is likely not letting nefarious apps get published, but in the likelihood one slips through, the message at the top of Google Play provides a direct warning, of sorts, to users. It comes as Google is missing out on a split of in-app purchasing (IAP) revenue as a result Epic Games’ bypass.

Of course, it falls short of directly and safely linking to where users could officially install Fortnite or at the very least providing a Google Search on availability.

We’ve reached out to Google for a comment on the exact rationale behind the Play Store message, and when exactly it was implemented.