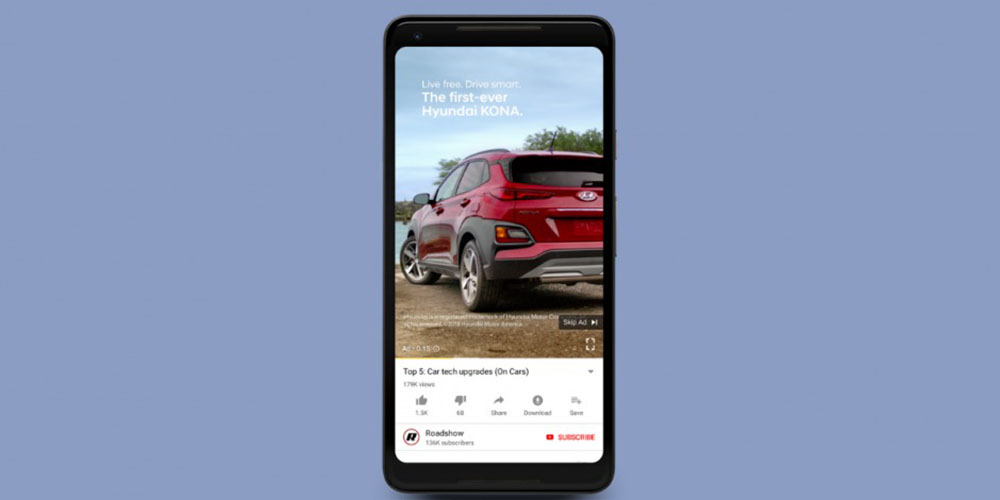 This week at Dmexco, Google has revealed a couple of notable changes to how ads on YouTube work, and it includes the arrival of vertical video ads on the platform…

Reported by The Drum, YouTube is about to start serving ads in two new ways. Firstly, the platform is about to add support for ads in a vertical video format. This allows advertisers to use more screen space for an ad on mobile devices similar to how ads can be served on platforms such as Snapchat or Instagram. Like a typical ad, tapping on the video would bring users to an external link.

Hyundai is one brand already using this new format with an ad block (pictured above) that dynamically changes to fit the video thanks to YouTube’s updated viewer. Apparently, this resulted in improved numbers for the brand’s campaign.

…when used in combination with the Google-owned platform’s classic horizontal video formats, the test campaign to promote the automaker’s most recent SUV model resulted in a 33% uplift in brand awareness and a 12% uptick in purchase consideration.

YouTube says that serving ads in this way is something its advertising partners have wanted for quite some time. It’s not hard to see why, as the platform sees around 70% of its watch time from mobile devices. Neal Mohan, a chief product officer at YouTube explains:

As more video gets shot vertically, we want to take advantage of the full canvas and not just have it rammed into the horizontal [layout] with black bars on the side.

Alongside the arrival of vertical video ads, the Home recommendation feed is also opening up to advertisements. Brands will be able to “buy inventory” in the Home feed, enabling companies can deliver “tailored content” alongside a user’s personalized recommendations. Mohan says that watch time originating from the Home feed has grown “three-fold” over the past three years. He says that both video and “rich display” ads will be available for the Home feed.