The Google Home Hub is the fourth addition to the Google Home family, and it marks the launch of the first Google-made Smart Display and the company’s first proper competitor to the Amazon Echo Show. While the device is the same as the first few Google Home entrants at its core, the display is definitely a boon for the experience and Google is making strides in smart home control…

Google even decided to go with the typical Cast-platform-based Google Home OS over Android Things, the OS that its partners use for their Smart Displays. The interface my look very familiar if you’ve used the JBL Link View or the Lenovo Smart Display, and both of those devices will be getting much of the Google Home Hub’s functionality, but they’re completely different under the hood.

Every single core feature and functionality of the Home, Home Mini, and Home Max are all at your disposal with the Hub. Perhaps the most important function of a Google Home, you can of course request music playback through all your favorite streaming services, and ask to listen to a podcast if you wish (might I recommend Alphabet Scoop?).

All the Google Home’s other helpful tricks are here as well. The majority of my use cases with my more than half-dozen Google Home devices in my home are to set timers while I’m cooking, ask about the latest news in the mornings, and use the Home Mini in the living room to quickly throw up Netflix on my Chromecast-enabled TV. All those features and more are on tap on the Hub.

All the previous Google Home models were without displays, making them handy little speakers — or in the case of the Home Max, a huge, powerful speaker — first and foremost. The Home Hub definitely doesn’t give up decent sound to get the display, but it’s not going to win any awards, either. I’d say in my brief few days of testing that it’s not quite as powerful and doesn’t get as loud as the standard Google Home from 2016, but it’s definitely way better than the Home Mini.

If anything, I was actually impressed by the sound it managed to put out for its size — but still, you’ll likely be happier with the standard Home if audio is your primary concern. 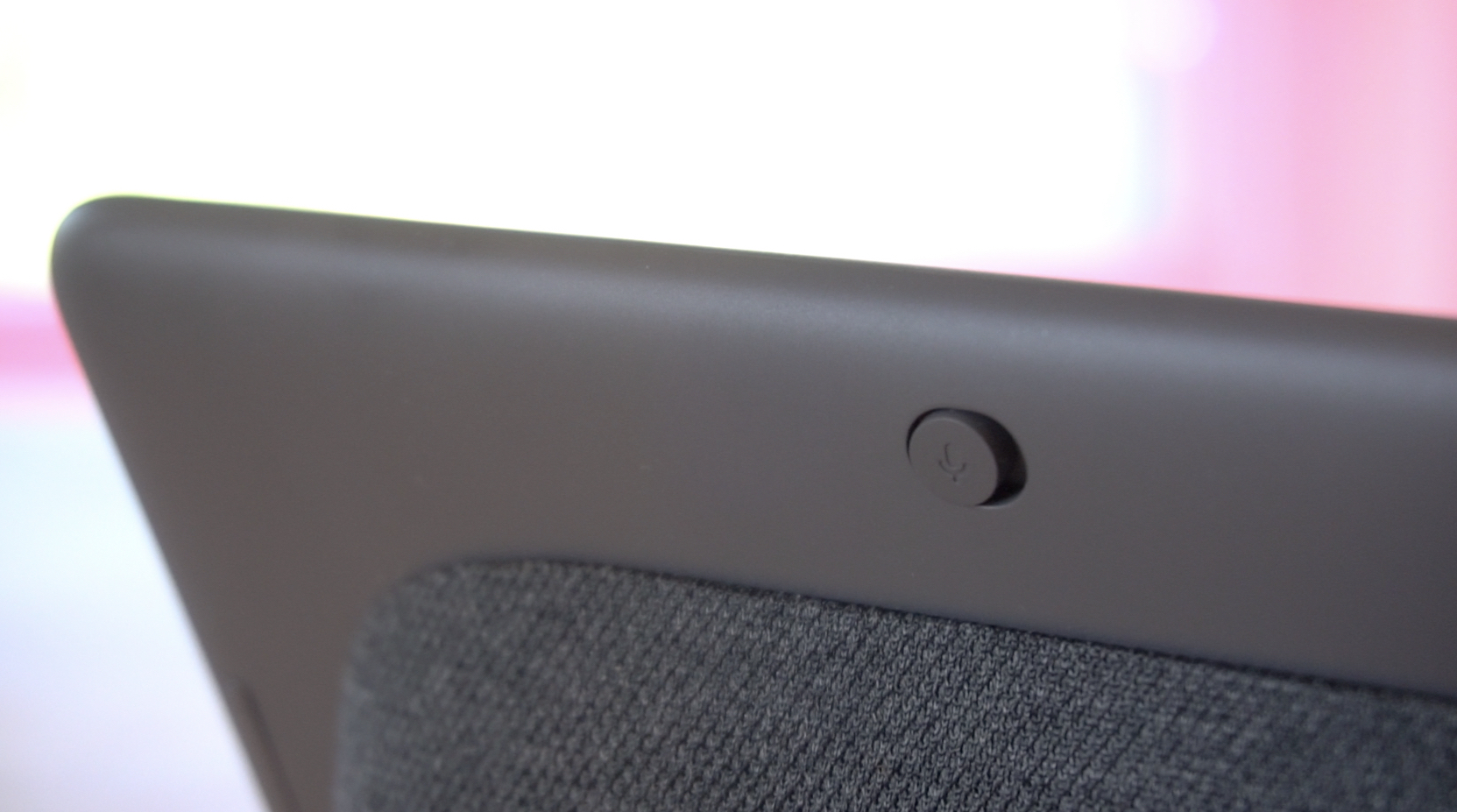 Until now, the primary differentiator when choosing between the Google Home, Google Home Mini, and Google Home Max, was what tier of speaker you wanted and how much you wanted to spend to get it. Functionally, the Home Mini, standard Home, and Home Max were all mostly identical. The Home Hub throws a wrench in that equation with its 7-inch display.

First of all, the display makes it easier to remember exactly what the Assistant can help you with. Once you tap to wake up the Google Home Hub beyond the ambient display, you get a home screen of sorts that shows the weather, and lots of cards that just give you suggestions. Maybe it’s your “heavy rotation” on Spotify or news — it’s nice to be reminded of what Assistant can do regardless.

Another key selling point of the Google Home Hub is that it functions as a great live photo frame. It wasn’t that long ago that digital picture frames that simply pulled photos off a USB drive were this price, but the Google Home Hub is much more. It wirelessly and automatically pulls all the best photos from your Google Photos library, and displays them all on this beautiful display.

The display definitely adds some new functionality of note, but you should know that, for the most part, it serves to supplement the existing helpfulness of the Assistant with visual feedback.

The timers you set all the time now show a nice circular animation on display while they run down, and you can easily stop them or pause them with a tap. There’s now visuals accompanying your queries for the weather for the week. Of course, playing Spotify will show you the album art, and song information, and you can browse back and forth between tracks with the screen.

Another thing is YouTube, YouTube TV, and other video streaming services. Whereas before you could use your Home to request that this kind of content be played on a Cast-enabled TV, it can now play directly on the Google Home Hub itself. So the request “show me how to deep fry a turkey” will immediately play directly on the device via YouTube.

A big win for the Google Home Hub in the kitchen — and one of my favorite features of the device as a whole — is recipes, which also aren’t new to the Google Home. But with the Hub, you can easily walk through them visually — progressing through the ingredients list and all the necessary steps for the recipe via quick voice commands.  No greasy fingers need touch the display. 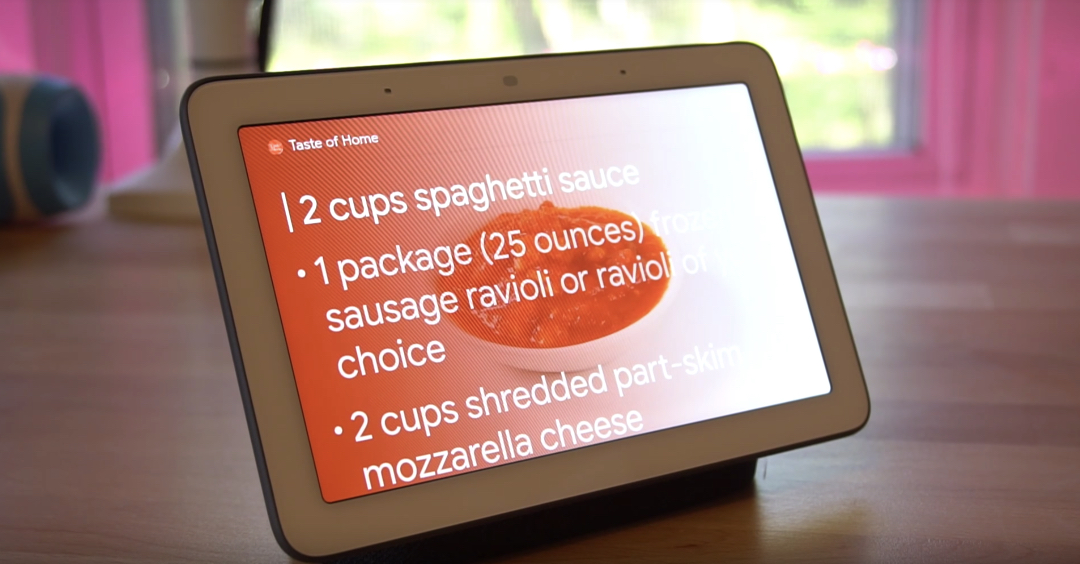 I’ve always felt the kitchen to be the most natural home for the Google Home, and I think that’s even more the case with the Hub. Playing videos for help with a recipe-related task, settings timers and following recipes hands-free, and listening to music while you do it all — it just makes sense.

Recipes were one place that I ran into my fair share of weird glitches and bugs — recipes just wouldn’t load sometimes for some reason. There were lots of these kinds of minor bugs in the last few days of testing, but it’s still very early and I didn’t notice anything that shouldn’t be resolvable soon.

Something that’s also a visual supplement, but begins crossing over into genuinely new functionality territory, is smart home control. Previous Google Home devices could control your Nest thermostat, for example, but now, Home Hub shows you an actual thermostat dial on your display so you’re not restricted to just straight voice queries. If you get it wrong, just tap on the display and change it.

That brings us to Home View, a new feature with the Google Home Hub that’s also now front-and-center in the Google Home app itself. This is basically where the “hub” part of the name comes in. No matter what you’re doing on the device, a swipe down from the top of the display will bring you to an overview screen that lets you control all your smart home devices. 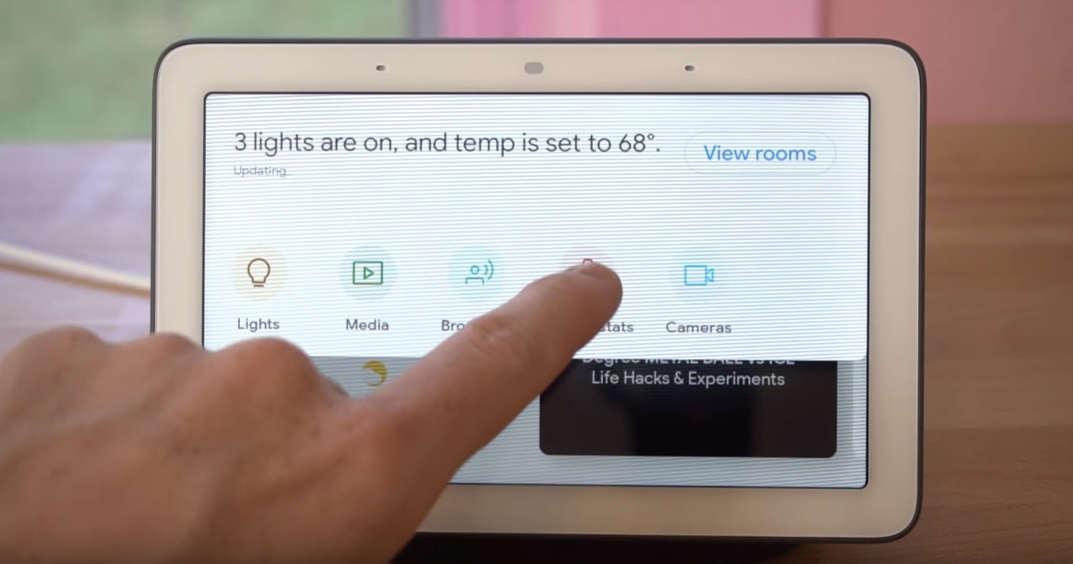 You can control lights — in my case I have Philips hue connected and can control my office lights — with a single tap. I especially found the color picker to be quite sleek. You can control media playback on a variety of devices — from other Google Homes to your TVs. And you can send a broadcast to all the Google Homes in your home if you want — this option works just like the voice command.

As mentioned, you can also control your thermostats, cameras, and locks. Thermostat control is convenient for obvious reasons, and I found the “Cameras” section of Home View particularly useful for keeping an eye on the dog in the backyard while working in the kitchen. I don’t yet have a compatible lock to try, but I presume it would be just as seamless. (That is, when Nest doesn’t have its unending hiccups — those I attribute to Nest, though, not Home Hub.)

I think the most important thing about Home View is not any one particular feature, but more that Google is finally putting all the infrastructure and ground work they’ve been laying for 2+ years and putting it all in one place. I’ve long wanted a true competitor to the Home app on iOS, and now with the new Google Home app and Home View, it’s finally all coming together.

Finally, there’s the hardware itself. I think it’s probably the least important part of the device, but it’s way nicer than I expected it to be after the first leaks started surfacing last month. Oh, and it’s small. Really small. Probably half the size you might imagine it to be. 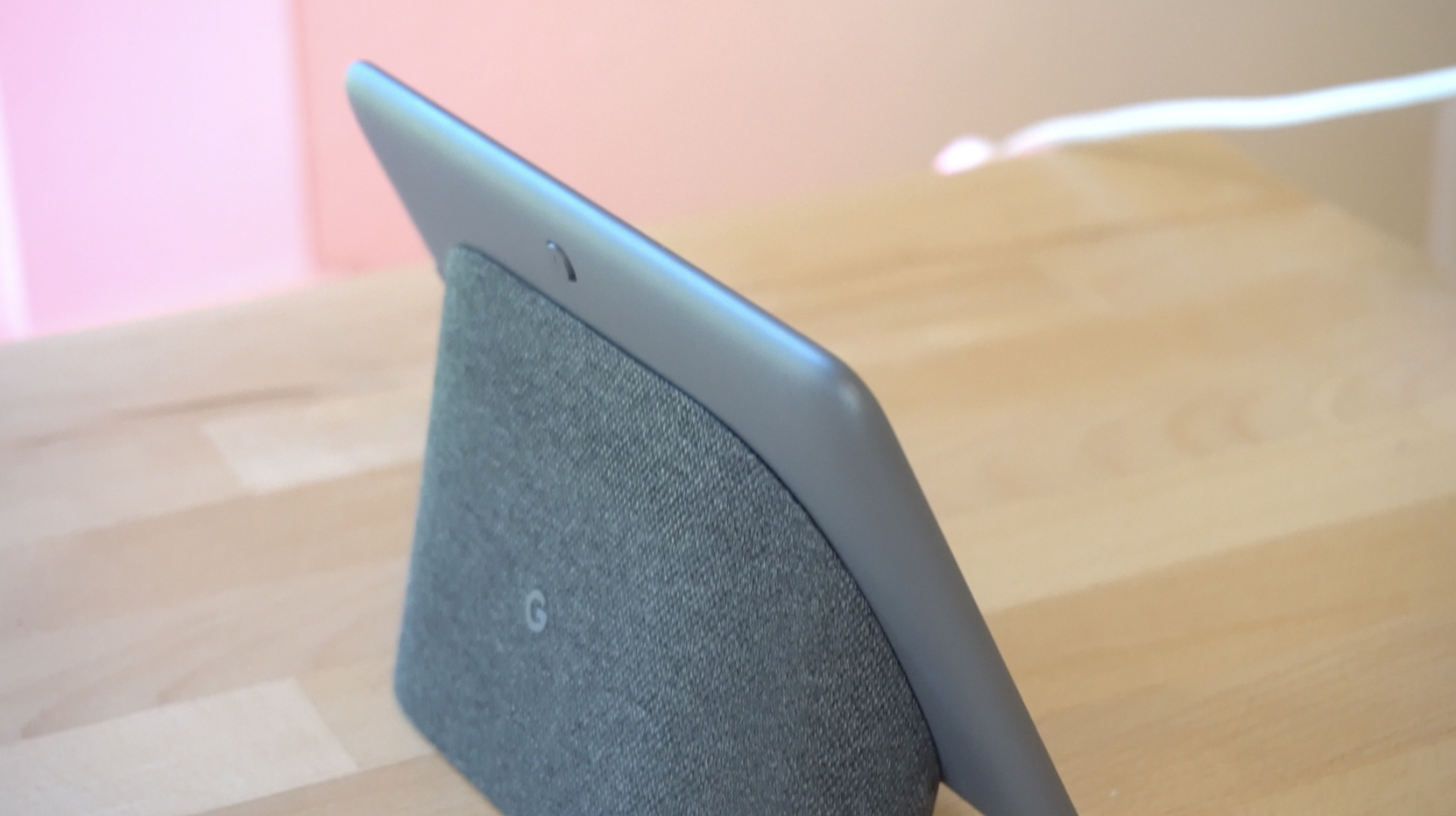 The petite build and size of the device just makes it irresistibly adorable no matter where you put it in my opinion — and the familiar fabric really does succeed at its goal of making the device feel homey and friendly. Like the other Google Homes (and especially the Home Mini), the Home Hub doesn’t feel like yet another obnoxious piece of gadgetry that’s constantly getting in the way of our life.

Speaking of getting in the way, I think the decision to go without a camera, even though it comes at the cost of video calling, was probably the right call. It’s far easier to place it in a bedroom or bathroom knowing that there’s no possible way it could be watching you.

One thing to note: I found that, on my kitchen counter, the majority of the device was hidden behind its screen. For me, the only bit of the back that was even visible was maybe the half-inch of fabric that you can see of the base below the screen. It’s unfortunate given how nice it looks, but I really don’t think that the color you choose will matter as much as you think.

A lot of the hub-like aspects of smart home control are really only valuable if you actually have smart home devices. That’s worth considering, but it doesn’t mean it’s any less great as a Google Home in its own right. That said, if you’re primarily interested in a Google Home to jam out to music while taking a shower, the slightly-cheaper standard Google Home might be a better option.

I think at $149, though, Google Home Hub is simply a great addition to any room — especially if you’re already in the Assistant ecosystem. If you don’t have a Google Home yet and want to get started with the most functional and helpful one yet, there is a lot value for your dollar here with this one — but then again, you can’t really go wrong with the Home or the Home Mini, either.