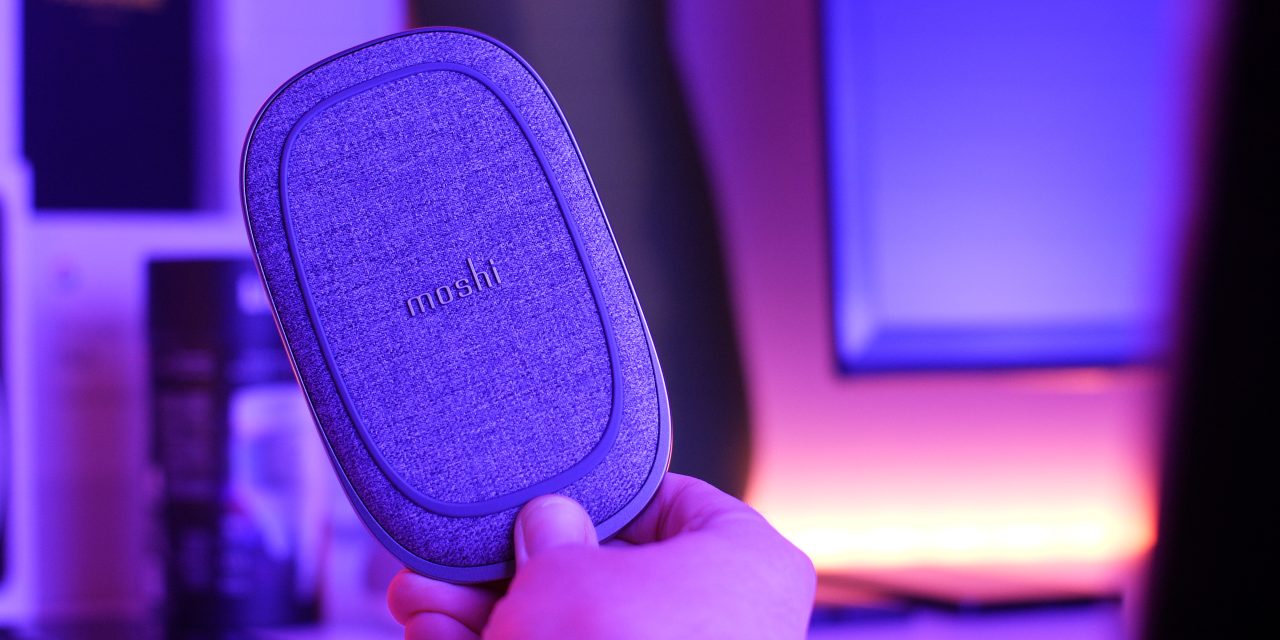 The Moshi Porto Q is not a cheap power bank. At over $80, it does throw up the question: how much are you willing to pay for a battery bank? That’s for you to decide. Besides that, it makes for a genuinely great travel companion and is one of the best multi-use power banks I’ve personally had the pleasure of using for a number of reasons.

I personally tend to buy a cheap power bank and then after a few months end up regretting the purchase as the battery fails or stops charging my smartphone and accessories. Even saying that, I need to say that I am firmly in the camp of getting four or five cheap power banks for the price of one ‘premium’ option.

Now for some contradiction: when I saw the Moshi Porto Q portable wireless charger I was intrigued by a) that $85 entry price and b) just how good it looked compared to the cheaper plastic models I am usually used to buying (and then sending to a landfill — sorry planet!).

Moshi clearly doesn’t aim this product at the ‘average’ smartphone owner, instead, they are targetting those who place a high value on aesthetics and form but still want function, too.

Straight away, you can see that the Moshi Porto Q is clearly not made in the same vein as those from one of the numerous online sellers on Amazon that peddle cheap, mainly disposable accessories for your smartphone. Instead, the small plate shape is covered on one side with a soft touch grey fabric that instantly reminds me of the Google Home Mini — albeit a little on the darker grey scale.

Layered on top is a rubber ring and Moshi logo that act to stabilize your smartphone when placed (carefully) on the surface. This combination of fabric and rubber is great for a few reasons in my opinion. Firstly, if you don’t rock a case on your smartphone, then the fabric layer won’t scuff the back of your phone when placed on top. 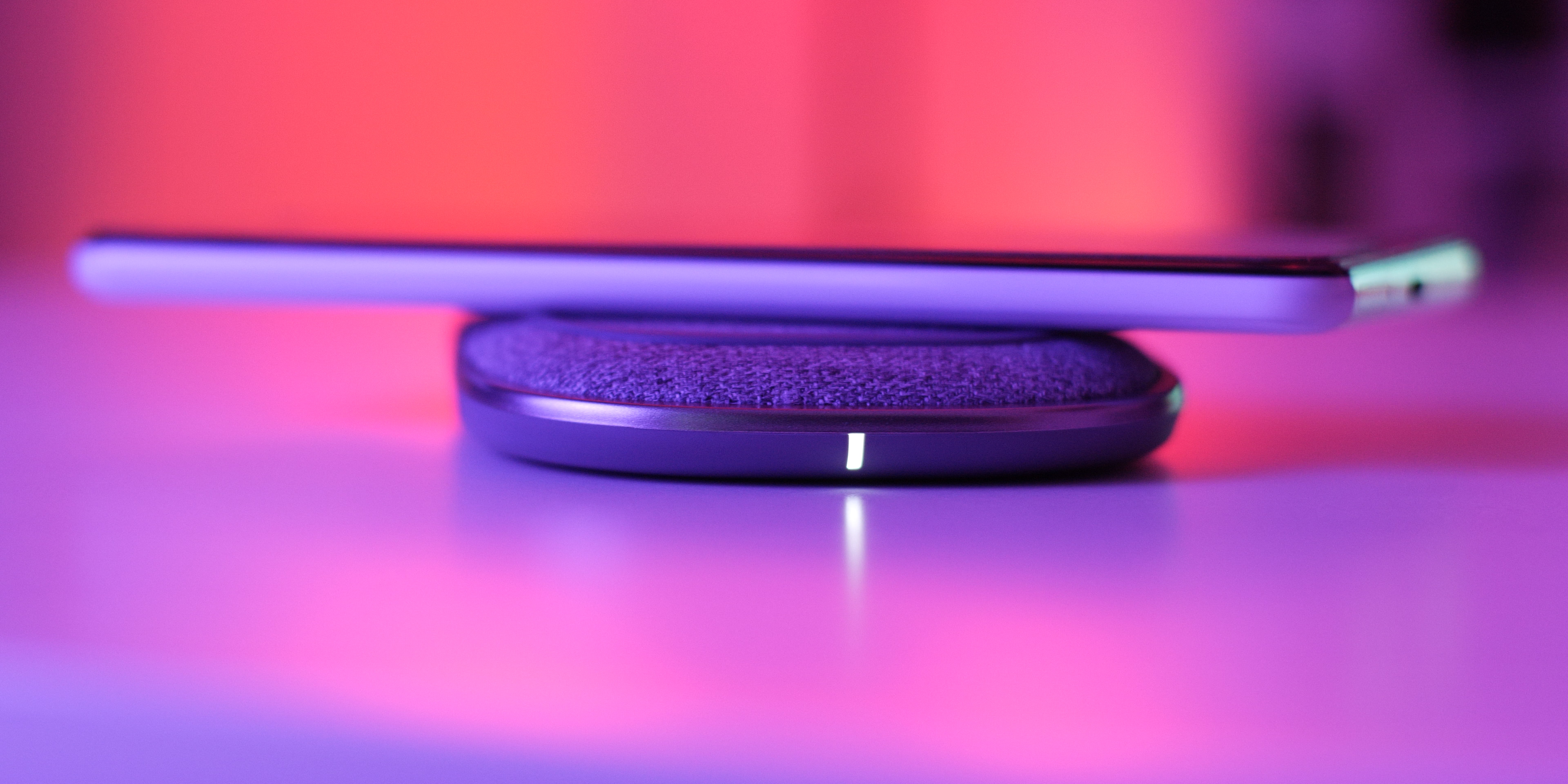 The rubberized ring and logo stop your phone from slipping and sliding around on that fabric too, which is especially important when notification vibrations can rattle your phone and cause it to slide around.

Honestly, this is a really good looking power bank. There is a small LED at the front which breathes when the Porto Q is charging a device either via cable or wirelessly on the pad.

The sleek aesthetic means very little (not that you need them anyway) buttons and ports. I had to really search for the small power button and charge level LEDs that are around the side as with my poor eyesight, I didn’t notice them when first opening the Porto Q 5K.

I still don’t get the power level LED thing on power banks, as until you get used to the levels through trial and error, one light being on means almost nothing. Admittedly, almost all power packs use this method but it’s still one of the core frustration— for me at least — with power banks in general. 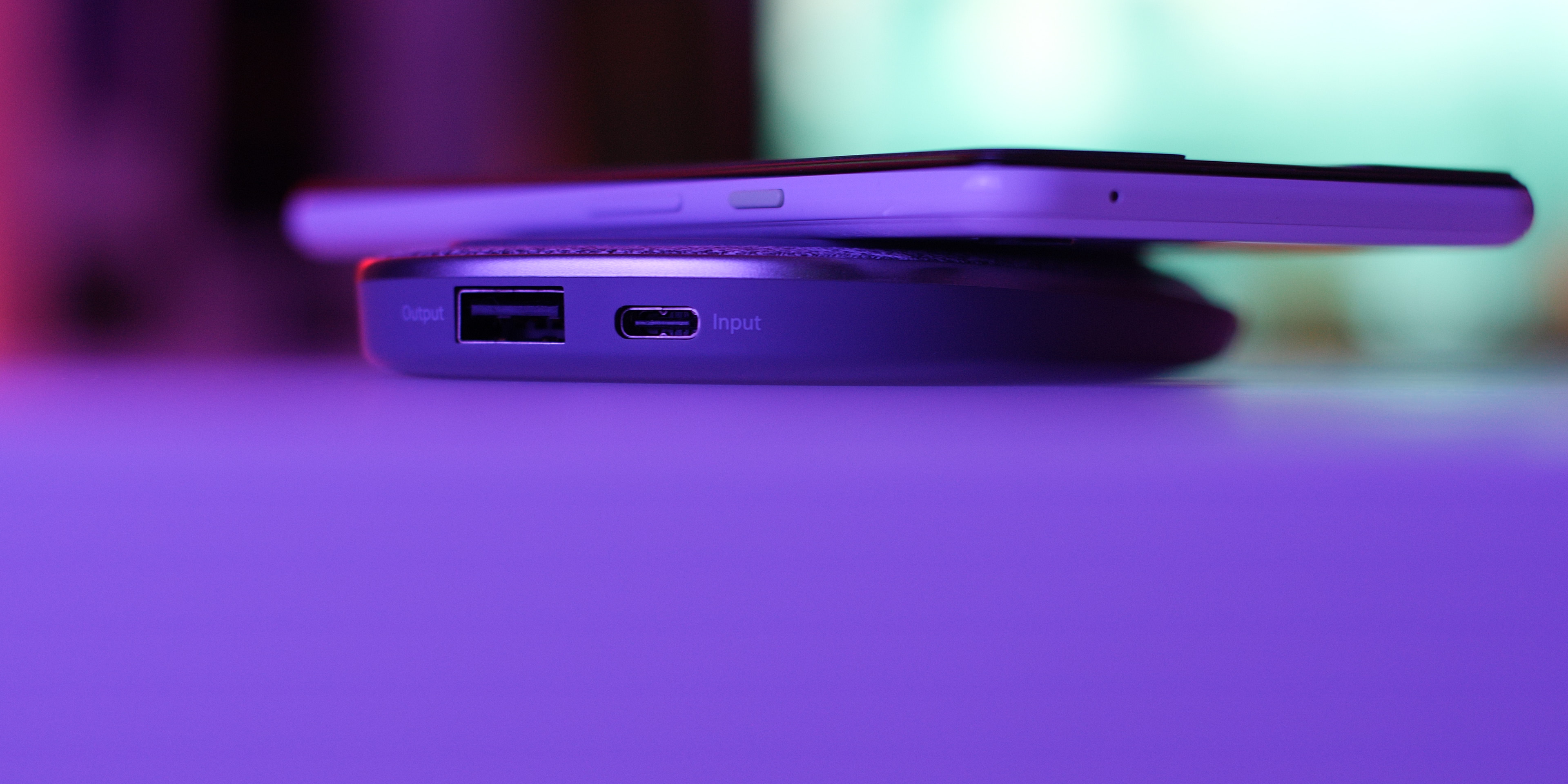 Overall, even with a smooth plastic bottom portion it feels well put together and has a heft that belies its small form factor. I would say the extra weight is almost reassuring when you hold the Porto Q 5K.

On the back portion, you’ll find the only input ports. You get one USB-A port for power output and a USB-C port that is used to charge the battery pack itself. I tried the Pixel 3 charge cable going from the USB-C port out to my Pixel and it seemed to take charge away from the device — my advice is just don’t do this!

The USB-A port is capable of up to 12W charge speeds, which unfortunately is a little short of the rapid charging for Pixel devices.

In practice, the Moshi Porto Q 5K works like any other power bank and it takes around two and a half hours on average to fully wirelessly charge my Pixel 3 XL from around 10% battery. One thing I did notice is that sometimes if you take your phone off the wireless charge pad for a little while and then place it back on, it won’t begin charging again until you press side button.

That is great for stopping the power bank from unnecessarily wasting power constantly discharging. I like this feature but I am sure some will be less forgiving with a power bank that is not all too far away from $100!

I did find myself using the Porto Q as a dual charger too. With a tiny bit of work charge two devices at once via the USB-A port and the wireless pad on top but that is just something to note rather than actually try for yourself. 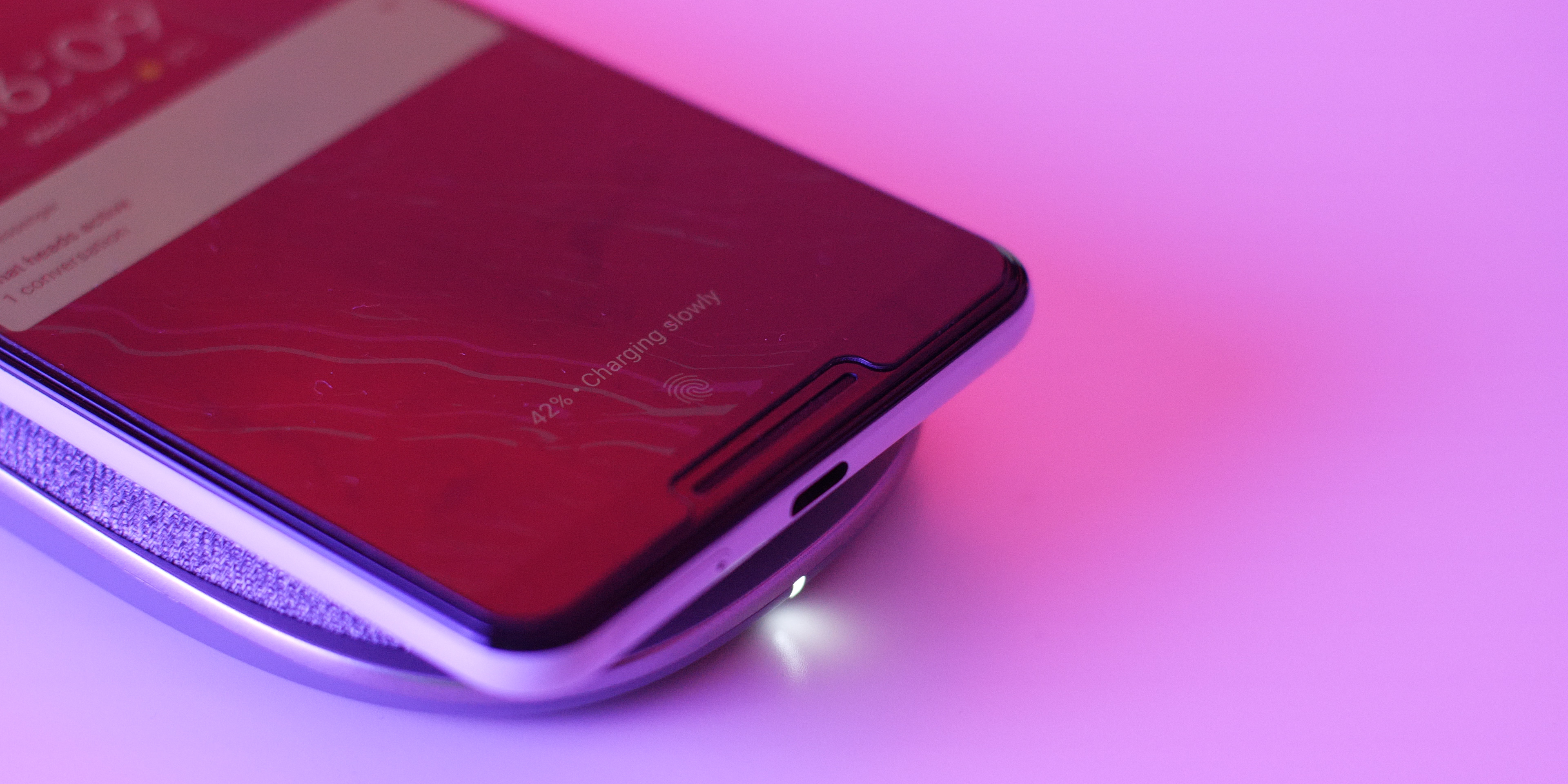 I did stick my mobile on the top of the Qi-plate when charging the power pack via USB-C though, so it effectively works as a standard wireless charger whilst simultaneously getting topped up too, so that is neat.

Another thing I noticed was that whilst the top portion is not so slippery, the bottom plastic half is what might cause slippages. On a completely flat surface, this wasn’t a problem. That’s because the weight of a device on top and the Porto Q was enough to stop major slides. I can imagine this could be more of an issue if placed on an uneven surface though.

The foreign object detection is something I personally haven’t seen before on a wireless power bank, so it was welcome but not something I would worry about in day-to-day usage. The LED light will flash to tell you something is on the Qi pad. I tried it with coins and it did detect them every single time.

Should you buy one?

Moshi is known for making some of the highest quality accessories that do genuinely justify the high price tags. The idea is that not only are you getting a device or accessory that works well, but it also looks aesthetically pleasing and feels premium.

One of my biggest gripes is with the overall capacity, 5,000mAh is around one full charge of my Pixel 3 XL with a little left over to give me a quick top up at another time. When some wireless charge banks cost around the same price and can offer nearly 32,000mAh of power and quick charge. You really have to make the decision based upon whether form factor is really the key selling point. 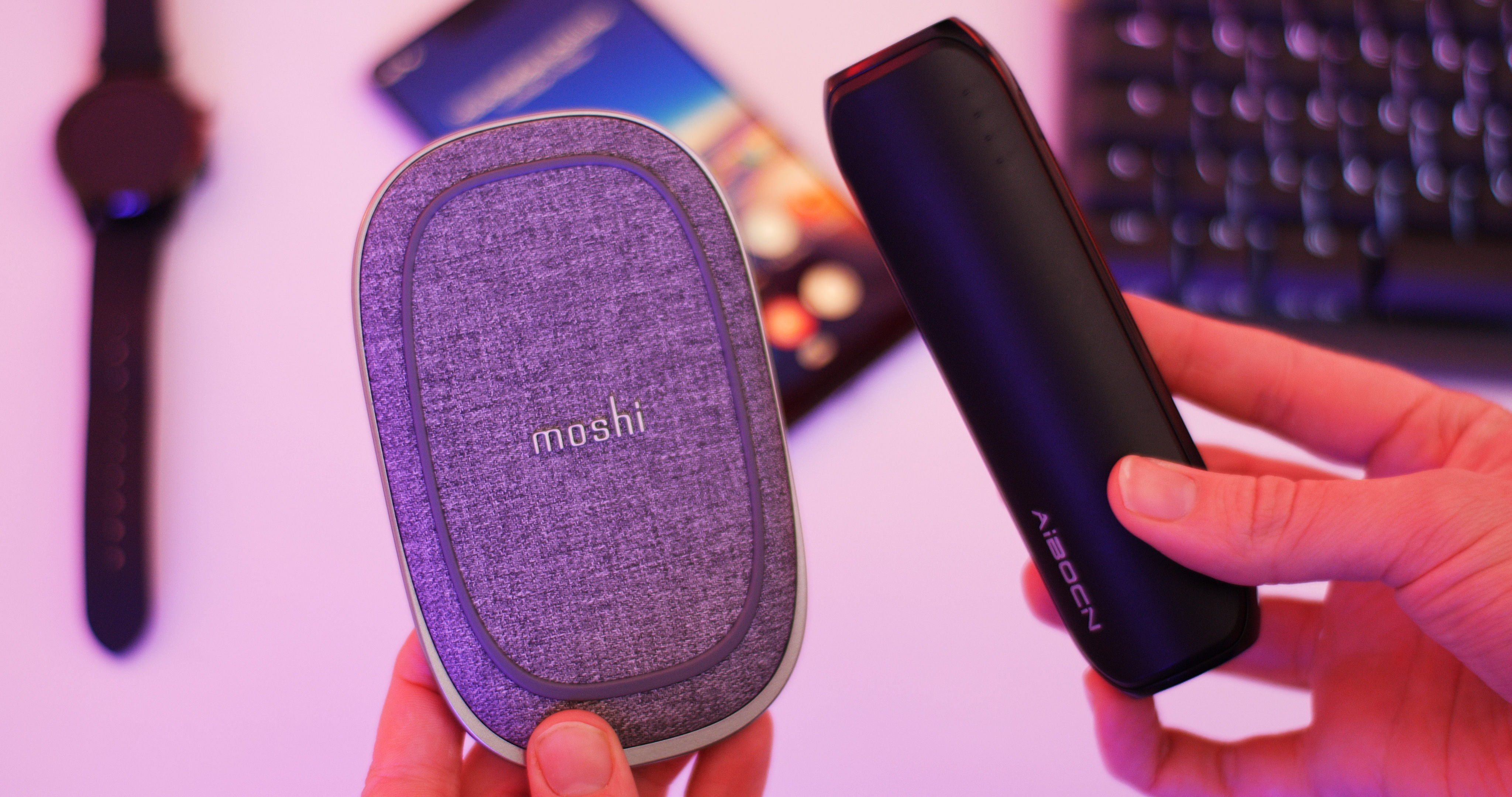 I can’t deny that it is a nice looking power bank and one that does appeal to my own aesthetic tastes. That said, honestly, I think there might be better options for most people out there who don’t care about the look of something that essentially just charges your phone or tech.

The charge speed isn’t exactly lightning, which is a real shame and one of the core reasons I wouldn’t recommend just anyone buy the Moshi Porto Q 5K unless having something that looks good on your desk or mobile office setup is extremely important to you. It’s most definitely my favorite power bank for looks alone, it just isn’t the outright best option for its core purpose — providing portable power at a low cost.

Get the Moshi Porto Q