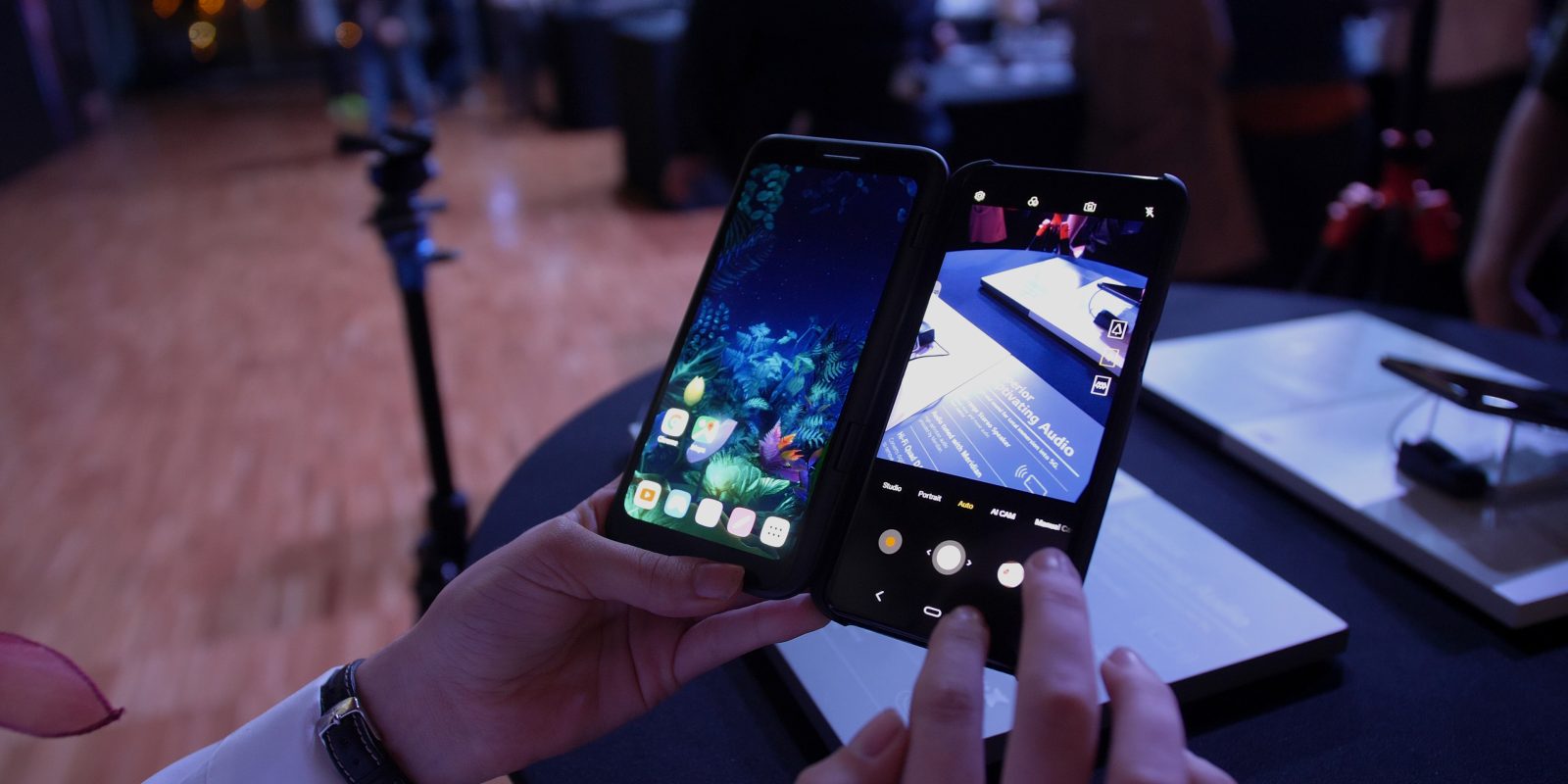 The LG V50 ThinQ looks to be a great handset and has all the hallmarks of an excellent device. The problem is that unlike the LG G8 ThinQ, it really doesn’t have any truly standout features unless you count the optional folding gamepad as part of the entire package.

Let’s start off by saying that the LG V40 was a device that probably should have done much better than it actually has. The hardware alone should have been enough of a draw for people to pick up the handset but the pricing clearly is an issue out of the gate.

Does the LG V50 ThinQ do enough to really make it a standout device though? I’m not so sure. Yes, this is the first 5G-connected LG device but 5G, in reality, is in its infancy with a near 0% support rate.

Are people willing to choose this over a competing 5G-connected device? Now that is an even harder question to answer. even after our brief LG V50 ThinQ hands-on session.

At first glance, the LG V50 ThinQ is hard to distinguish from the LG G8 ThinQ — at least in my opinion. That doesn’t mean that either is a bad looking phone, far from it. I wouldn’t expect them to stand out among the LG lineup. It’s just worth noting.

Like the G8, the device feels reassuring and solid when held. I can’t fault the build quality of the V50 in any way. It feels seamless and well thought out from a usability perspective at the very least.

I am pleased that the opted for a standard rear-mounted fingerprint reader. It is right in the sweet spot that we all seem to know and love but for some reason, like the G8 ThinQ, it was disabled for usage during the demo session.

I can only imagine this was to prevent devices from being perma-locked. It does mean I can’t vouch for the overall speed of the unlock process but I don’t anticipate that it will be ridiculously slow or anything — at least I hope! 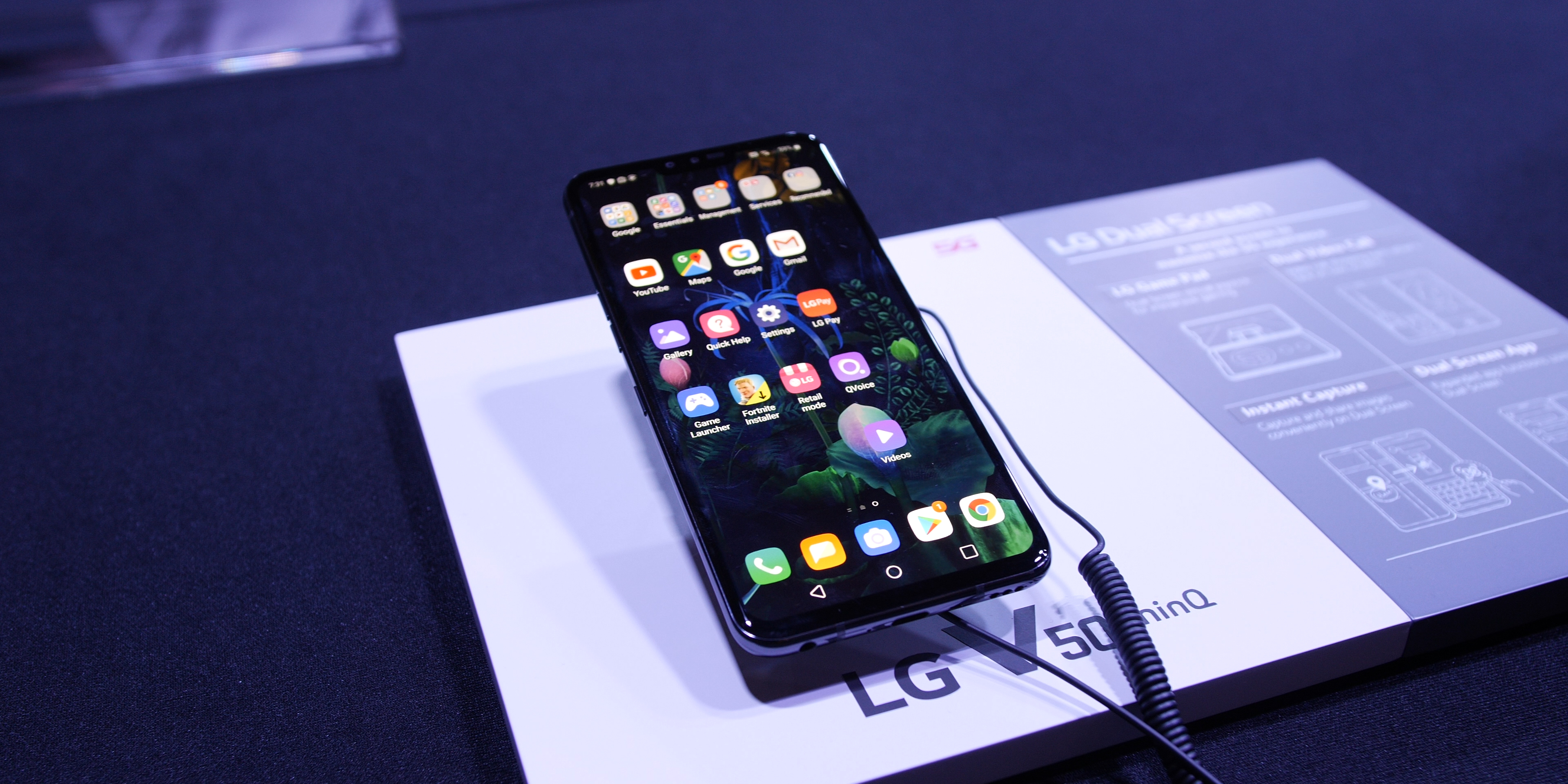 Now it’s at this point that I’d like to mention the sort of hacky way that LG has added the ability to fold the LG V50 ThinQ. By adding a secondary display that can be used as a gamepad or second screen, you could argue that they have technically created a folding smartphone.

Now that isn’t really what they’ve done. The second display is actually neat and compact in practice and if it were offered as part of a bundle would be a great add-on item for someone who is a hardcore mobile gamer — do these people exist?

Is it a gimmick? I’d argue yes, 100%. Will it sell? I’m not sure to be completely honest. The gamepad feature was very impressive during the short hands-on session. It did have a few janky patches but all-in-all I found it did work really well. Pricing will be key to whether it is adopted. I think I might have a soft spot for it though, if only as it reminds me of the Nintendo 3DS.

LG is no stranger to oddball additions and it is one of the core reasons I have a soft spot for the South Korean company despite them having a tough time in the smartphone market of late.

The display is one area that both the LG V50 ThinQ and LG G8 ThinQ are certainly not lacking. The QHD+ OLED display looks superb and given just how many smears I left on the display, it didn’t detract from just how good it looked.

Android Pie and the Snapdragon 855 make for insanely good performance. I didn’t see any sort of hangs, hiccups or slowdowns during the LG V50 ThinQ hands-on session. To be fair, I would have been almost irate had I experienced any given the stacked specs. The overall power performance package that the V50 offers is on par with the Samsung Galaxy S10 thus far and I don’t foresee any issues.

The addition of that secondary display did seem to pose a few more issues though. I’m not sure if it was the software or the operator but when shown the hardware working I found it did exhibit the odd pause — especially when going from portrait to landscape. I’ll put this down to teething problems as technically it’s pre-release, but if that persists after release there shouldn’t be any excuses. 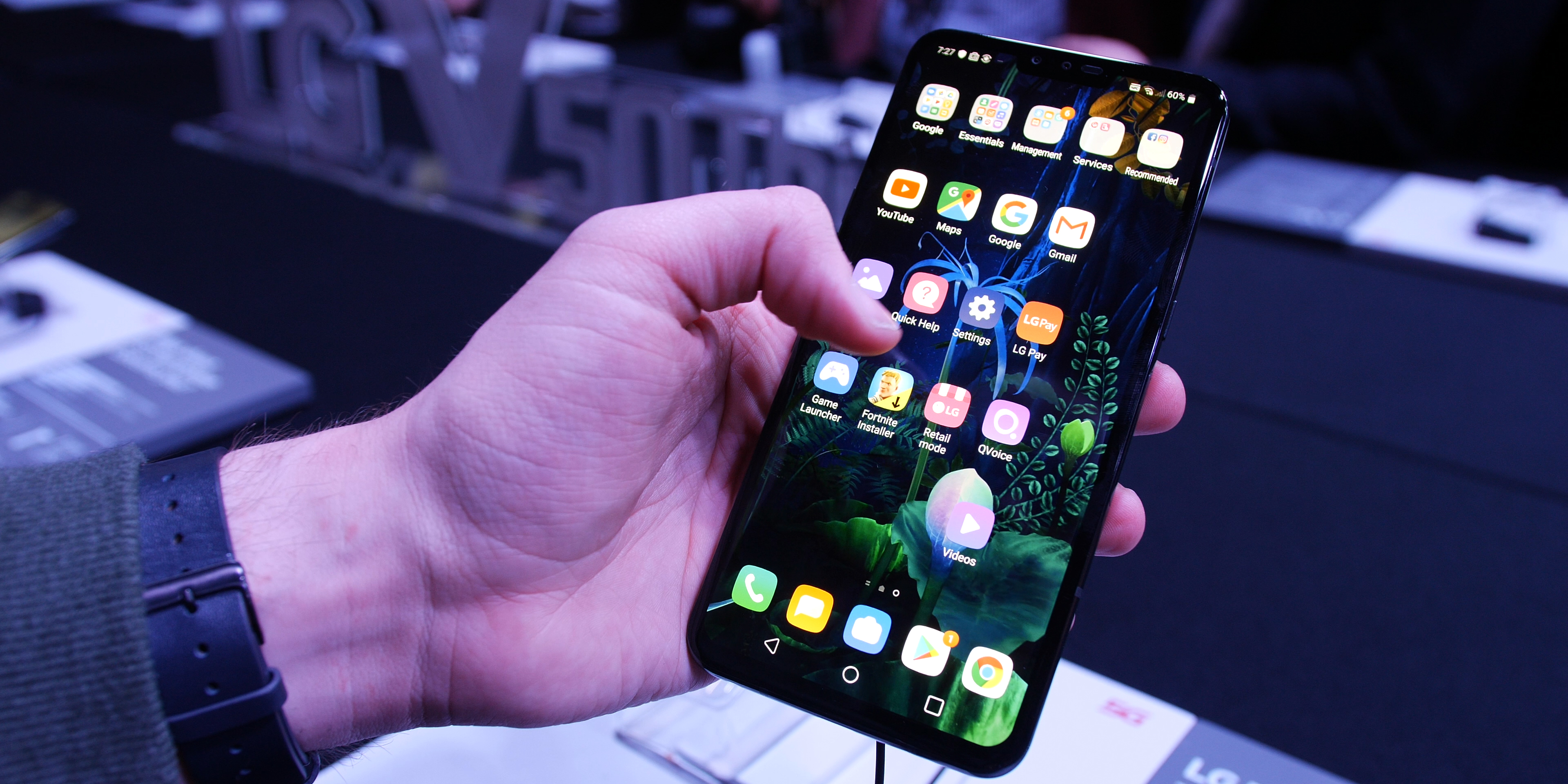 I mentioned in my hands-on with the LG G8 ThinQ that software was one area that really worries me. LG simply doesn’t have the track record that it should have with regard to software updates and it stands to reason that the V50 might encounter the very same issues. At this early stage it’s difficult to work out if we’ll have update woes but, again, I’ll reserve judgement until I get the opportunity to test a device over a longer period than an hour after a keynote.

I will say that I do like the lightweight, almost stock Android that comes with the V50. It doesn’t pollute the app drawer with a ton of extra apps that don’t really do a great deal — which is lovely.

The front-facing camera does not include any of the neat hands-free control tricks that we find on the G8 but the rear cameras are more than a match for that device. Behind that flush back glass, you’ll find a plethora of quality camera hardware. It is, in fact, the exact same triple camera setup as found on the V40 so we know what to expect at the very least.

The V line from LG has always been the true camera competitors and I would expect the V50 ThinQ to absolutely no different. It packs in some impressive camera tech, that will no doubt perform admirably after release. What little opportunity I had to delve into the camera system was futile as a tethered device proves almost impossible to test in the surrounds of a poor lit taster session. 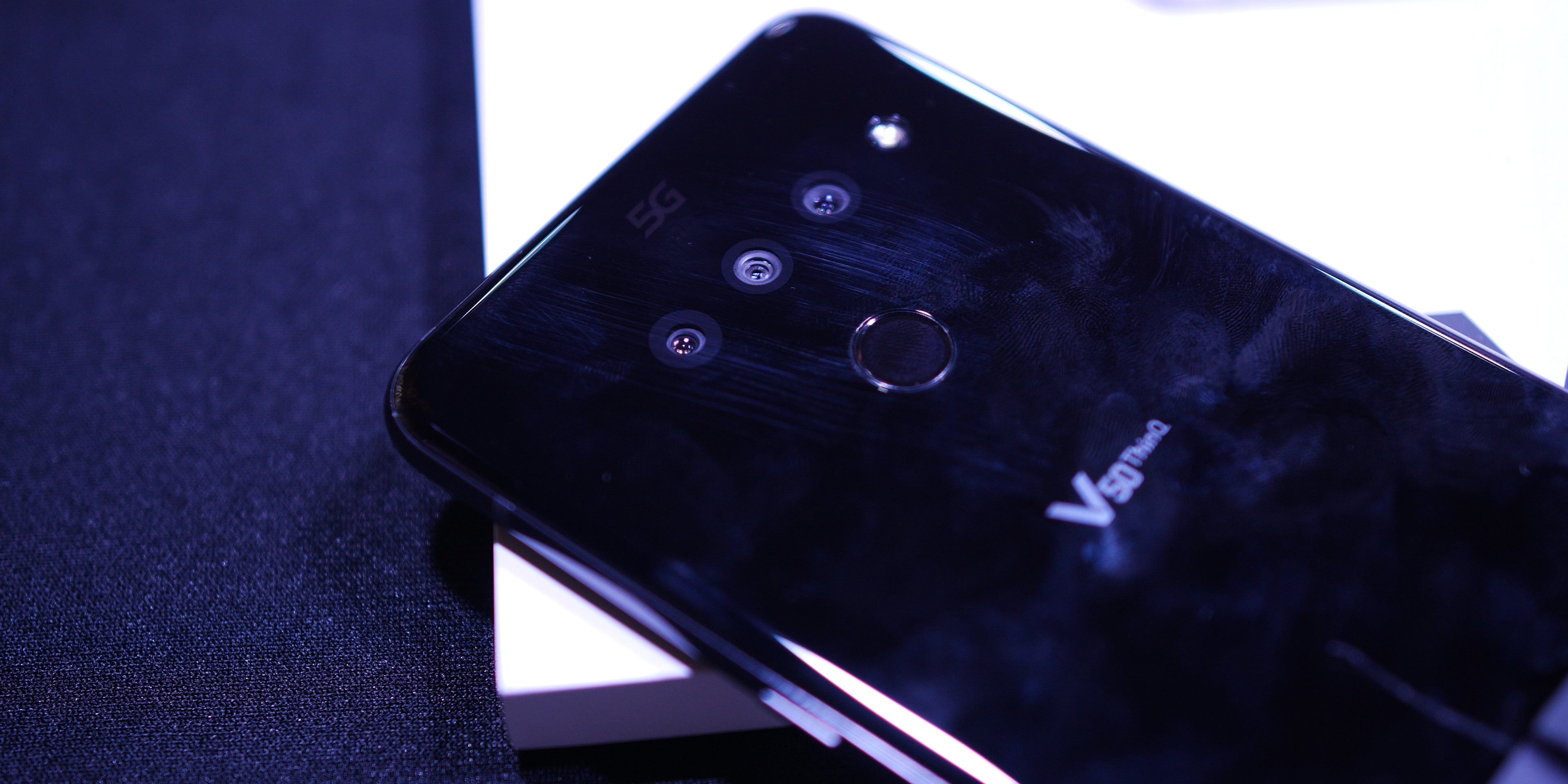 I will say that the face detection or tracking was very impressive even in this less-than-ideal scenario as was the portrait mode pickup distance. I am looking forward to taking the LG V50 ThinQ camera setup for a spin that is for sure.

Like the LG G8 ThinQ too, the V50 has a flush camera under the back glass of the handset, which also looks superb. I have to give LG major kudos for that camera design decision and hope that many more manufacturers adopt a similar approach even if it means that broken back glass could render your device completely unusable.

My gut tells me that this is arguably a more sensible purchase than that of the LG G8 ThinQ but at the very same time, I think that the extra hands-free features it brings make it a more attractive package than the LG V50 ThinQ.

Sure 5G will explode in the coming years but at this point in time, there isn’t a great deal that sells this handset other than relatively nice design and potentially great cameras. I doubt that 5G connectivity will head to where I live for at least 12 months and then, we are looking at a new lineup of devices that utilize the connectivity, with likely better performance and — likely — much newer software.

Now consider that the LG V40 was announced just four months ago and you could point to this not being such a huge upgrade. The new Snapdragon 855 is nice. 5G is nice. But the price will be bumped up nicely to accommodate these new inclusions.

At the moment I must say that I find the LG G8 ThinQ a slightly more attractive proposition — if only for the actual oddball inclusions that will come without needing to spend any extra.