The Google Material Theme has slowly expanded to all of the company’s apps. Version 4.0 last September introduced the bulk of design changes to Google Photos, with the latest now updating the navigation drawer on Android.

Over the past few months, Google has been rolling out a new account switcher that is more compact and drops the cover photo, which was a vestige of the now deprecated (for consumers) Google+. Just featuring a user’s profile, name, and email address, the new UI element is half the size of the previous switcher and slides down your list of accounts.

On Friday, users on Reddit (via Android Police) spotted a new navigation drawer for Google Photos that is not yet widely rolled out. In addition to the new Material Theme account switcher, Google has reorganized some sections.

Photo books, Device folders, Archive, and Trash are still the first four items. As “Add partner account” is not next, there is no line separation. Settings — no longer at the bottom — follows with Free up space below it.

Users that do not have a partner account will still be prompted in the nav drawer to set one. It is otherwise accessible from the dedicated Sharing tab. A new “Google apps” section links to PhotoScan with Help & Feedback last. At the very bottom, there are Privacy Policy and Terms of Service shortcuts, which the Google app just added in its latest beta.

This design is rolling out as a sever-side update and not on any device that we checked this morning. Additionally, some items will not appear if a feature isn’t available in your country.

Update 4/11: After first popping up over the weekend, the new Material Theme navigation drawer for Google Photos appears to be widely rolled out. As of Thursday evening, it is appearing on all devices running version 4.13 that we checked. Try closing Google Photos from the Recents menu to reload. 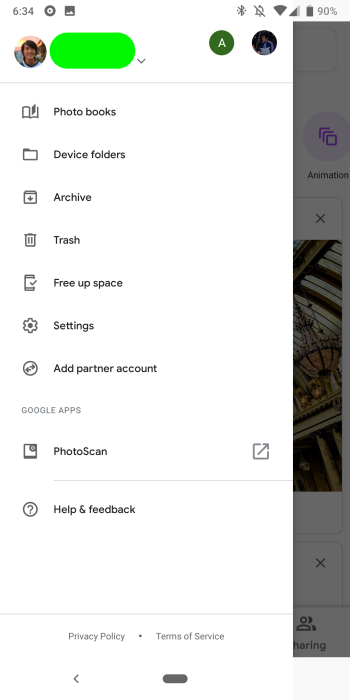