For months now, Google hasn’t been updating the distribution numbers for Android as it has monthly for ages. There’s been speculation regarding the outage, but at Google I/O 2019 today, the company finally provided an update – Android Pie has seen 10% adoption much quicker than previous Android versions.

Android Pie is being adopted faster than ever

Android distribution numbers are always a little depressing, but with today’s update, there’s a silver lining. Google says that the 10% adoption of Android Pie is way ahead of schedule compared to past releases, with the update currently sitting at 10.4% of the chart.

The quicker-than-usual adoption of Android Pie can be seen as a win for Google, and specifically for Project Treble. The update method was first baked in Android Oreo and Pie gave it its first chance to really shine. Clearly, it’s working at least to some extent. With OEMs such as Samsung pushing out updates faster than usual, it’s clear Google efforts are making a difference.

The folks at VentureBeat point out that Oreo also saw gains since the last update, but pretty much everything else is down in numbers (except Gingerbread, strangely). Google explains that the outage of this distribution report was due to a technical glitch and that it will be updated regularly from this point on, albeit “less frequently.”

Apparently, Google also wants this chart to provide more context for the numbers, undoubtedly to avoid any more cheap shots from Tim Cook and Co. Presumably, that also includes some details from “Project Mainline.” 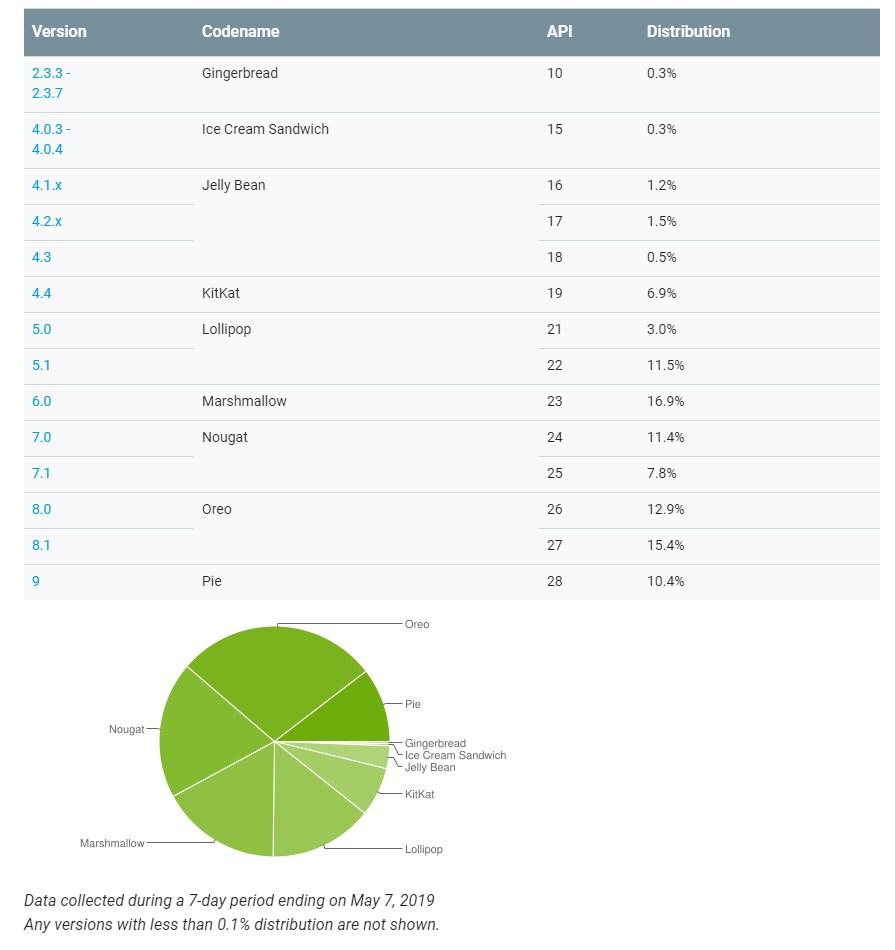 2.5 Billion Devices are on Android

In related news, Google also today provided a quick update on the massive number of devices running on Android. During today’s keynote, the company confirmed that a whopping 2.5 billion devices are currently running on the platform as monthly active devices. That’s a staggering number, and also a huge increase from the 2 billion that was previously revealed two years ago at I/O 2017.

10 years and now over 2.5 billion active devices. Thanks for joining us on this journey. #io19 pic.twitter.com/wC2VcVgEBS