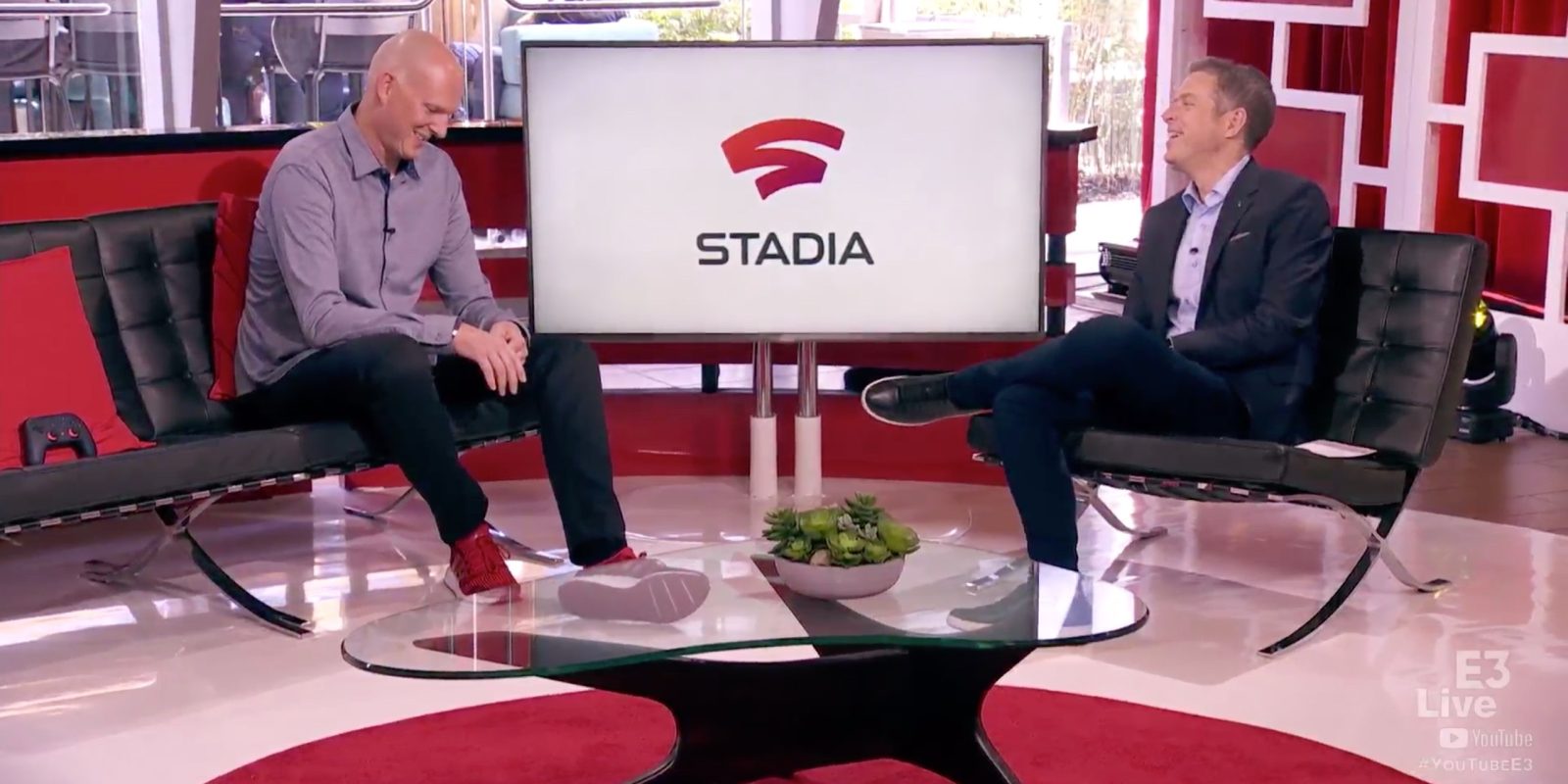 While Google does not have a show floor presence at the gaming conference, Stadia head Phil Harrison did sit down for his “only E3 interview” on Sunday. He addressed the perpetual fear that Google kills products, while also detailing features like multiplayer and additional publisher subscriptions.

Taking questions from Twitter, host Geoff Keighley asked Harrison about the popular fear and critique that “Google is going to shut [Stadia] down” in the future. The Stadia VP explicitly said that “Google is incredibly committed to this platform,” and followed up by nothing his personal dedication to it. The former Microsoft and Sony veteran moved from London to California last year to lead Stadia.

Phil Harrison talking about #Stadia: "Google is incredibly committed to this platform."

This is the message they need to broadcast loud and clear.

Update: The full Phil Harrison Stadia E3 interview is now available to watch on YouTube without having to rewind through the entire livestream.

When asked about free-to-play, Harrison did confirm that Stadia would feature that model, but also teased another structure that Google will support. Publishers are “starting to think about their own subscriptions as well.”

“I don’t think that will be for every publisher, but I think for some of the publishers who have the bigger catalog and the more significant lineups.”

Stadia users could end up paying publishers for access to an an additional library, with Harrison suggesting that announcements around this new model are happening in “short order.” This is somewhat analogous to a base cable subscription and then paying for premium channels.

On pricing, Harrison did try to defend the more conventional aspects of Stadia that prevent it from being a Netflix for games, and requires buying newer titles as “Not all games will be available on subscription.” Google countered by noting that a single purchase will allow users to play on all their screens, not just a console.

“Remember that the games are not linked to a particular device anymore. That one purchase gives you the value across your TV, your PC, your laptop, your tablet, and your phone. So, any screen in your life. We think that is a transformational moment for gamers. They also get the absolute latest, greatest gaming hardware powering their experience without the need to buy the hardware.”

On the latter point, Harrison described the current 4K/60FPS capabilities announced at GDC 2019 in March as “Gen 1 hardware infrastructure.” However, he did not provide the cadence for which Google will upgrade its infrastructure to allow for higher resolutions (8K was previously touted) and other features.

Additionally, Harrison said Stadia Base is coming in “early 2020. 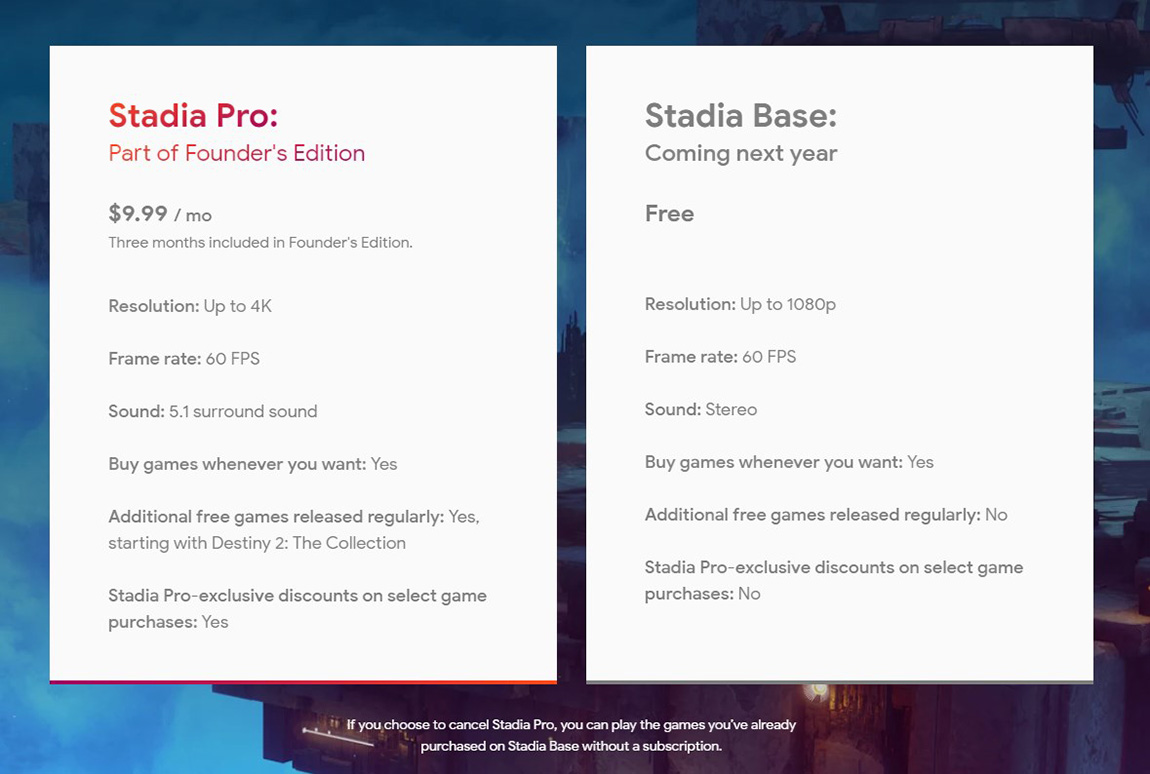 Talking about Stadia Pro during the E3 interview, Harrison did not specify how often Google will add games to compliment Destiny 2 beyond promising that the subscription will be a “value.” He additionally did not detail the discount that comes with Pro when buying new games.

It’s going to be familiar to the current subscriptions that gamers are use to. And obviously we’re going to work hard to put as many great games and value into that subscription that we can.

We will work with our publishing partners to set the prices that are right for them. But I think as a Stadia Pro subscriber, we will do our best to get great value. You see this with other gaming platforms where they will have promotions or discounts that come from time-to-time.

Given the social nature of gaming, Google promised that it will “not gate multiplayer behind the premium subscription,” compared to PlayStation and Xbox today. Meanwhile, social feature will come to Stadia over time with continued updates.

“We see every game is multiplayer. We think that’s a very good evolution for the industry. We have a bunch of social features in our platform that are really putting multiplayer at the heart of everything we do.”

Google vs. other game streaming services

With Microsoft expected to announce a competing xCloud service, Harrison did highlight how Google’s approach is different during the E3 interview. Namely, Stadia has no legacy cruft, and the social aspect provided by YouTube.

Plus we enjoy a great partnership with out friends at YouTube and the YouTube creators, who I think are going to become hugely influential. Even more so than they are today in the way that games get discovered and get enjoyed.