Google last week announced that the Advanced Protection Program was coming to enterprise G Suite and Cloud accounts. With three key features, the company today announced a fourth that will block risky downloads in Chrome.

The new web protections against malware and other risky downloads come as attackers are “shifting their strategies to threaten Advanced Protection users outside of email,” where Gmail already works to scan attachments and URLs.

Linked malware and “drive-by downloads” are the new threats, with attackers trying to get users to “unknowingly download harmful software onto their devices.”

Chrome users that are a part of Advanced Protection Program and have Chrome Sync/sign-in enabled will get additional warnings when downloading “certain risky files,” or have the attempt blocked entirely. Alerts appear in the download bar and specify how “Advanced Protection” was responsible. 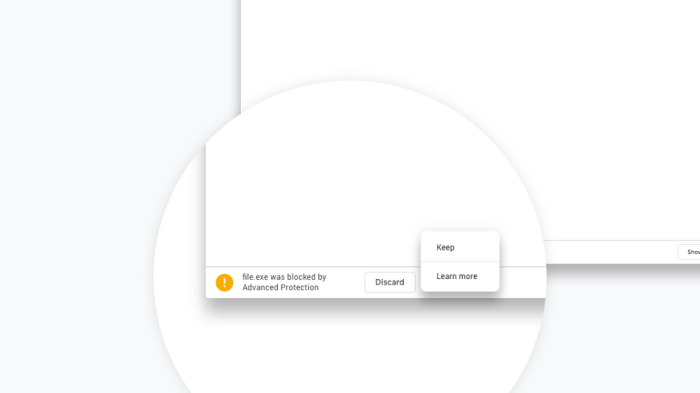 We’ve been tracking this new Advanced Protection Program in Chrome for several weeks now, with Google at Cloud Next Tokyo announcing a slew of other measures like the availability of Titan Security Keys in four more countries.

Launched two years ago, the Advanced Protection Program is for users “most at risk” of targeted online attacks. This include journalists, activists, politicians, and business leaders, with Google promising an “evolving list of security offerings.”

The consumer APP has three others pillars, starting with a physical Security Key requirement to sign-in. Gmail and Google Drive will block third-party apps from accessing your files, including non-Google web or first-party clients. Lastly, signing back into your account after being locked out involves additional verification.