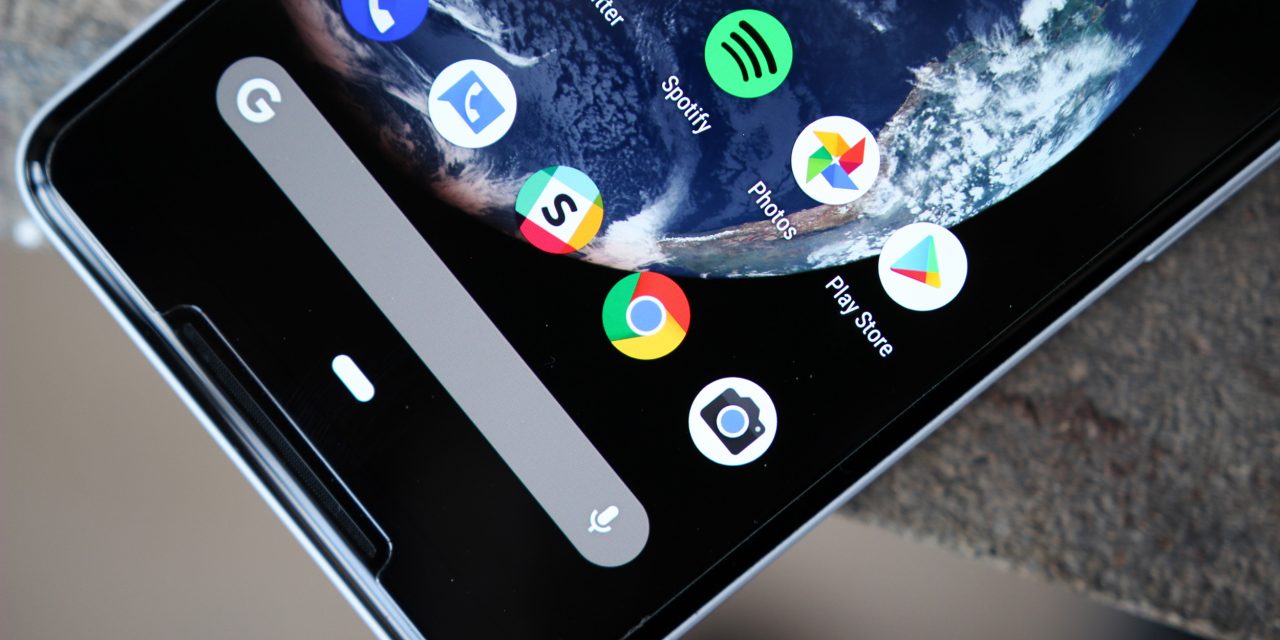 Dark mode lovers have already been rejoicing in the upcoming release of Chrome for Android’s own version of dark mode, since we demonstrated an early version in Chrome 73 beta. In that demo, it was only Chrome’s own UI that was being darkened, but Google has bigger ambitions for its web browser’s dark mode on Android. A new code change indicates that Chrome for Android will recolor web pages themselves when using the browser’s upcoming dark mode.

Between the inclusion of dark mode in a wide variety of Google apps and the addition of a system-wide dark mode in Android Q, including automatically darkening apps that don’t have their own built-in dark mode, it’s clear that dark mode is a high priority for Google this year.

One of the most highly anticipated apps to get dark mode is definitely Chrome for Android. When we first discussed Chrome for Android’s Incognito-inspired design for dark mode, which only altered the browser’s own interface, readers drew a comparison to Samsung Internet’s “Night Mode.”

Available for over a year now, Night Mode takes your favorite websites and alters them to be darker and thus easier on the eyes. Chrome for Android may be employing a similar strategy for its own dark mode, according to a new code change posted tonight to Chromium’s Gerrit source code management.

The change adds a new Chrome flag, #enable-android-web-contents-dark-mode, whose name alone makes its purpose fairly clear. Digging deeper, we can see a little bit of what the new flag will actually do.

When the flag is enabled, a preference is toggled in Blink, Chrome’s underlying engine, called “force_dark_mode_enabled”. This preference, under the hood, tells Blink whether or not to use some of its built-in “high contrast” settings. These high contrast settings should simply change the colors of some aspects of web pages, and because they’re commonly used for accessibility purposes, they’re designed to not affect performance.

Interestingly, Blink’s dark mode setting is a recent addition that was created earlier this month to help Android’s built-in WebView browser respect Android Pie’s “night mode” developer setting. That means both Chrome for Android and WebView will soon both be able to darken web pages when in their respective dark modes.

Chrome’s experimental new dark mode for the web should arrive first on Chrome Canary in the coming days. As for Android WebView, we may not see that arrive in WebView beta for a few more weeks, likely in version 74.

Update 8/28: While this dark mode has been available in Google Chrome for Android since version 74 launched in April, it’s remained hidden behind a flag, making it difficult to adjust on the fly. A new code change was discovered by XDA-Developers that reveals an easier way to darken your web pages.

Starting likely with Chrome for Android version 78, a new checkbox will be added to the “Themes” page in the app’s settings, when you have “System default” or “Dark” as your chosen theme. This checkbox, simply labeled “Darken websites,” will do just what it says on the tin, and darken your web pages while in dark mode.

Almost ironically, the checkbox that makes dark mode easier to use than switching a flag in chrome://flags will at first be hidden behind its own flag.

Show a darken websites checkbox in themes settings when system default or dark is selected. The checkbox can toggle the auto-darkening web contents feature

Update 2/26 7:00am: You can now try out dark mode for the web in the latest Chrome Canary by going to chrome://flags and enabling the flag #enable-android-web-contents-dark-mode. Note that Chrome Canary is considered unstable by Google, so you may run into some occasional issues. The flag should arrive in Dev builds in the coming weeks.

Update 2/19 1:25pm: The folks at XDA-Developers pointed out that features arrive even faster for unofficial Chromium builds, which happen almost every time a code change occurs. These are, of course, more unstable than even Canary builds, and are not as well integrated with the Google ecosystem.

They are, however, perfect for demonstrating the capabilities of new Chrome features like dark mode for web. I’ve included some screenshots below of different sites and how they look with the new flag enabled. As you can see, some sites look gorgeous, others…less so, including our own 9to5Google homepage, unfortunately. 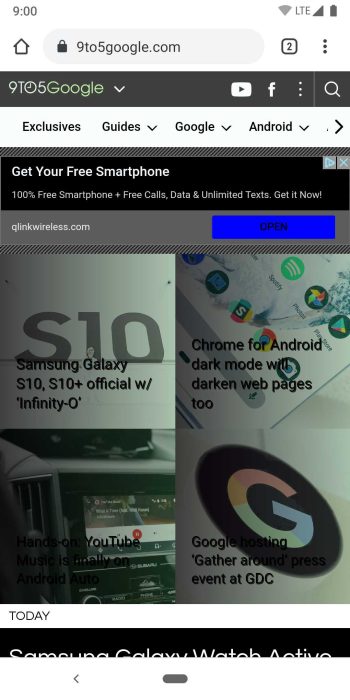 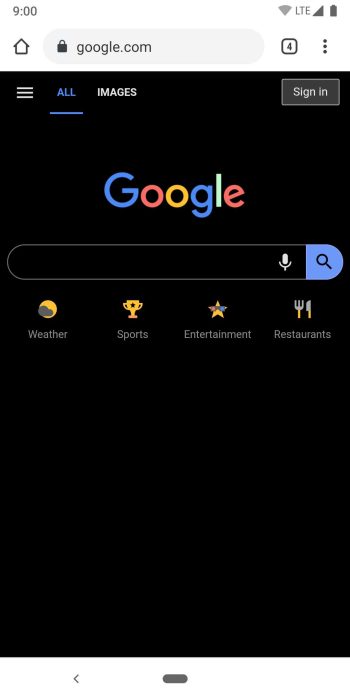 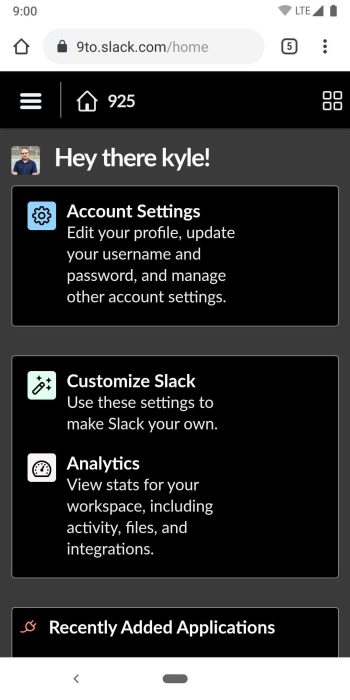 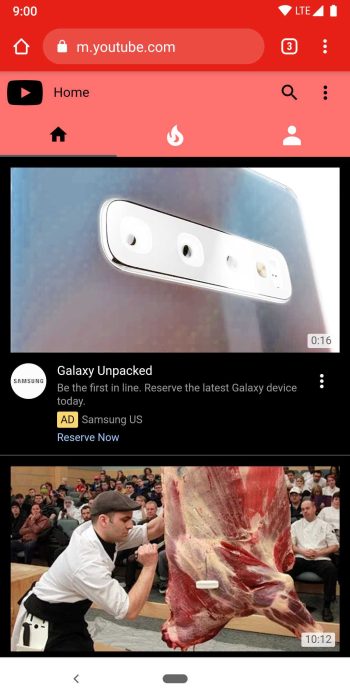 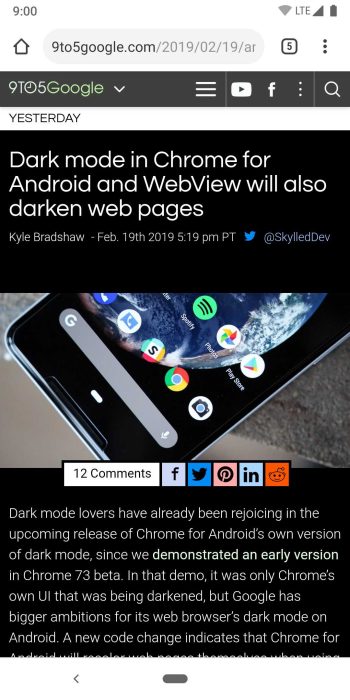 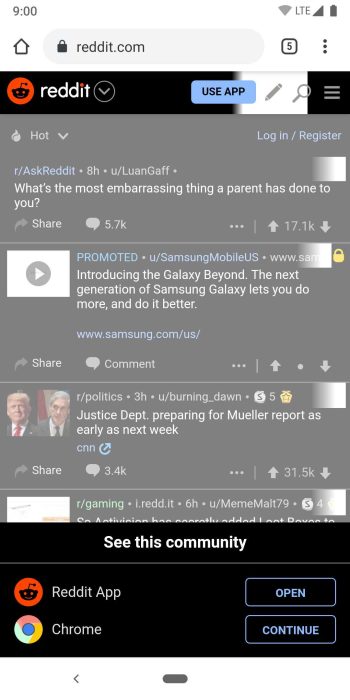