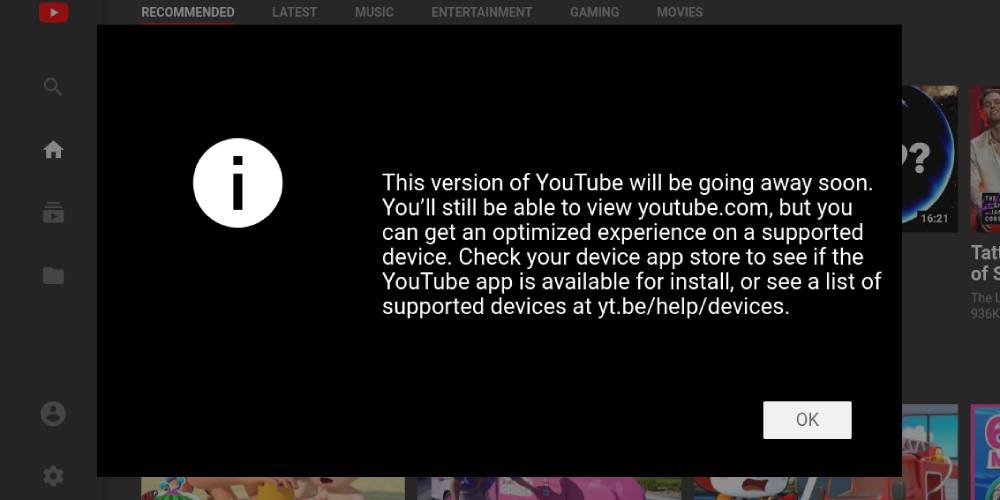 YouTube has offered a “leanback” experience that’s remote optimized on the web for a long time – nearly a decade, in fact. Now, it’s been revealed that this feature will be killed off in the near future.

As some Android Police tipsters pointed out, a message now appears on the YouTube leanback web app which explains that the feature will be “going away” at some point in the near future. There’s no date attached, though.

Update 9/16: According to Variety, Google will shutter the Leanback UI on October 2nd. Apparently, Google plans to shut down the interface because it “was never meant to be used by uncertified devices, which weren’t capable of supporting all of its features.”

It’s unclear why Google is disabling this feature which allowed computers, Raspberry Pis, and other devices to access a TV-friendly version of the platform where Google doesn’t offer official apps.

Most likely, this has something to do with the web app for YouTube’s leanback interface being exploited on platforms that Google has not made licensing agreements with, such as Amazon’s Fire TV before recent changes.

This version of YouTube will be going away soon. You’ll still be able to view youtube.com, but you can get an optimized experience on a supported device. Check your device app store to see if the YouTube app is available for install, or see a list of supported devices at yt.be/help/devices.

Of course, the removal of the YouTube leanback web app shouldn’t affect the official YouTube apps which use the same interface. Android TV, Roku, and other officially supported TV platforms use this interface and if anything, disabling the web app should make those a bit more flexible to new updates.