Google Pixelbook vs. Pixelbook Go: Will it be worth the upgrade?

Google’s Pixelbook is arguably the best Chromebook ever made, and also one of the best laptops in general, too. Now, it’s looking like Google has a new laptop, the Pixelbook Go, in the works for later this year. Based on what we know so far, will the newer Pixelbook Go be worth the upgrade over Google’s original offering? Let’s weigh things out.

One thing that made the Google Pixelbook the incredibly capable, well-loved device that it is is its convertibility. When you need a laptop, the Pixelbook was ready to rock with one of the absolute best keyboards available on a laptop. When you just need a tablet, just fold the keyboard out of the way, or even use the keyboard as a stand while in tablet mode.

By comparison, the biggest change in the upcoming Pixelbook Go is that it will almost certainly not be a convertible. Our sources haven’t confirmed this to be the case, but visual evidence currently points to the Pixelbook Go being a traditional clamshell Chromebook. This means the Pixelbook Go will be far less flexible, but if you don’t plan on ever needing or wanting a tablet, it may still be worth the upgrade.

By far and away, the most exciting upgrade the Pixelbook Go offers compared to all Made by Google Chromebooks before it is the optional Ultra HD 4K “Molecular Display.” With this display and its traditional 16:9 aspect ratio, the Pixelbook Go is perfectly designed to watch 4K movies anywhere you go. 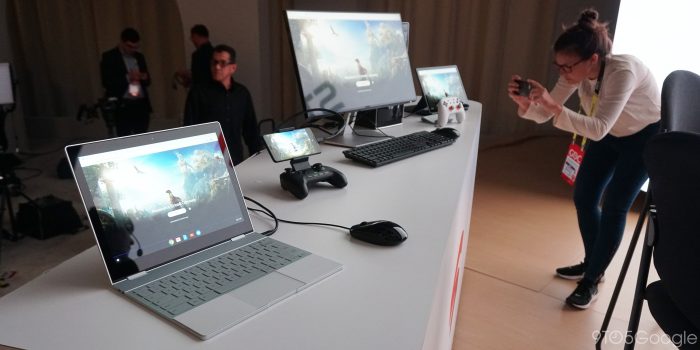 More exciting than that, though, is the fact that the Pixelbook Go will be able to stream and play Google Stadia games in full 4K resolution at 60FPS (provided you have a good enough internet connection and a Stadia Pro membership, of course). That alone could easily make the Pixelbook Go worth the upgrade, for gamers who like to travel.

In the two years since the Pixelbook first released, Google has added a ton of new features to Chrome OS. The most impressive of these is the ability to use Linux applications, including developer apps like Android Studio. This has created a new demand for Chromebooks with higher amounts of RAM, to run more powerful applications.

On the Pixelbook and Pixel Slate, the only way to get 16 GB of RAM is to buy the top-of-the-line model with an Intel Core i7 processor, each retailing at around $1,600. With the Pixelbook Go, Google is offering an optional upgrade to 16 GB of RAM for the mid-range Intel Core i5 models. Assuming Google prices this well-balanced mid-range model far lower than $1,600, it may be worth upgrading from the original Pixelbook to get more RAM. 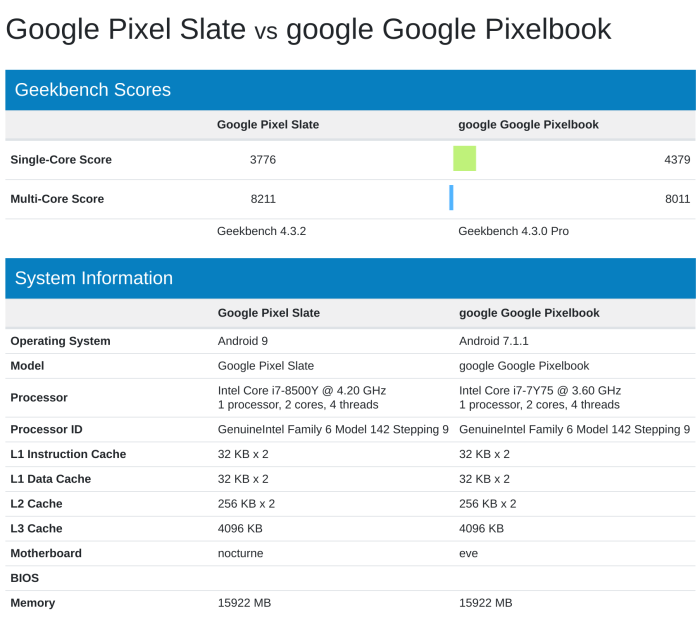 Most Geekbench 4 tests score the i7 Pixel Slate somewhere in the 7500 to 8500 range, topping out at 8707, while the original i7 Pixelbook seems to score more consistently in the 7200 to 8200 range with a top score of 8702. While any improvement is a good thing, this minor CPU boost isn’t worth running out and upgrading to the Pixelbook Go for just yet, but we’ll know more once it properly releases.

Further, if you’re an owner of an i7 Pixelbook, you’ll find one hardware feature actually missing from the top-end i7 Pixelbook Go models. While most Chromebooks feature eMMC-style storage, the i7 Pixelbook packed an impressive NVMe solid state drive. For an in-depth look at the difference, check out this comparison between the eMMC and NVMe models of Microsoft Surface Go. Suffice it to say, you might be disappointed moving from i7 Pixelbook to i7 Pixelbook Go.

Pixelbook Go: What we don’t know yet

The biggest question mark on the Google Pixelbook Go right now is pricing. Evidence points to the Pixelbook Go offering a base model with specs near identical to the Pixel Slate’s current base model (not the Celeron models), with an Intel Core m3 processor and 8 GB of RAM. This model of Pixel Slate originally sold for $999, was later dropped to $799, and at of time of writing is on sale at $549 plus a free keyboard.

For a device that’s designed to be used on the go, be it in a cafe, a library, or at lunch, style can be critically important to some. No one wants to be the guy pulling out an old, boxy cinderblock of a laptop in public. 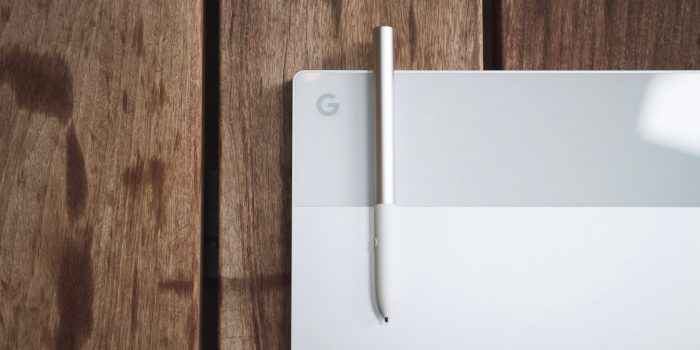 On that front, the original Google Pixelbook is a very striking laptop, because it manages to perfectly capture the classic “Google Pixel” style seen on the phones. With last year’s Pixel Slate and this year’s Pixel 4 phones, Google has begun to depart from that style, deciding to no longer include the “window” design. 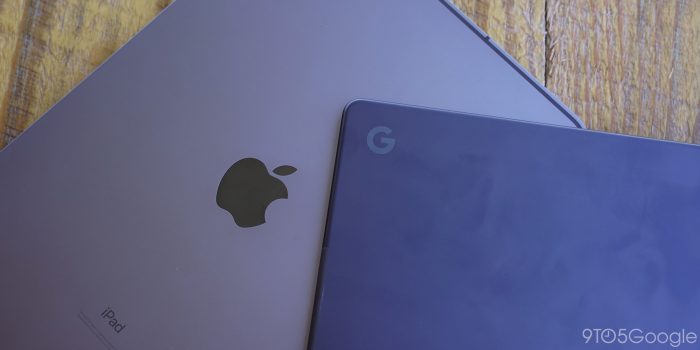 Unfortunately, we don’t know much about how stylish of a device the Pixelbook Go may or may not be. Our only clue that Google may be taking style strongly into account is their decision to craft a model reminiscent of the “Not Pink” Pixel 3.

One more thing to keep in mind, which might matter more to new purchasers rather than those contemplating an upgrade, is updates. Recently, people have been paying more attention to the fact that Chromebooks come with a built-in expiration date, usually at least five years away, after which your device will no longer receive updates.

For what it’s worth, the Google Pixel Slate and the original Pixelbook have both been given an End of Life date of June 2024. We don’t know whether or not the Google Pixelbook Go, being newer, will have an additional year or two of update support, or if it will be given the same June 2024 End of Life date as its close sibling the Pixel Slate. Longer update support could easily be something of a selling point for the Pixelbook Go.

Should you upgrade to the Pixelbook Go?

For now, the short answer is: maybe not.

There are a few niche cases where the Pixelbook Go makes for a worthy upgrade — most notably the 4K display — but there are also some places where the original Google Pixelbook is still superior — such as convertibility.

At the same time, there are plenty of things we don’t yet know about the Pixelbook Go that prohibit us from giving a stronger answer. Thankfully, we don’t have to wait long to get the answers, as the Made by Google 2019 event is less than three weeks away.

Google Pixelbook Go Made by Google 2019