One of Google’s simpler services is Google Tasks, which offers traditional to-do lists that are synced across your devices with your Google Account. However, while Google Tasks has a convenient app for Android and iOS, the only way to access it from the web is from the sidebar of other Google apps like Gmail. A third-party developer has created an alternative way to access Google Tasks in full-screen on your laptop, desktop or Chromebook.

While there are undoubtedly more featureful to-do apps available, Google Tasks is used by many for its simplicity and integration with Gmail. Unfortunately, Tasks doesn’t have its own website, and instead can only be accessed via a small UI within other apps like Gmail, Calendar, and Docs.

Frustrated with that state of affairs, a developer has created a Chrome extension that gives Google Tasks a full-screen UI, even somewhat mimicking the design of the existing apps. Once launched, the extension opens as a standalone app, which you can also pin to your shelf on Chrome OS.

The app’s two-pane design makes editing and organizing your tasks simple. The full-screen UI is also quite useful on Chromebooks, as the Android app for Google Tasks only works in an awkward vertical orientation, not a horizontal one. 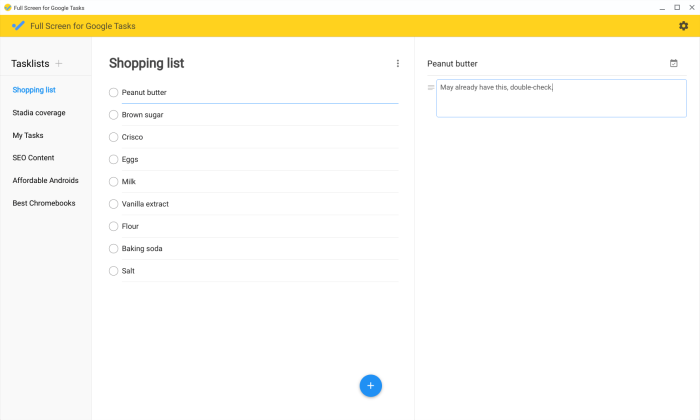 At this point, it’s just silly that Google hasn’t made a proper full-screen web interface for Google Tasks, especially after shutting down the old one early this year.