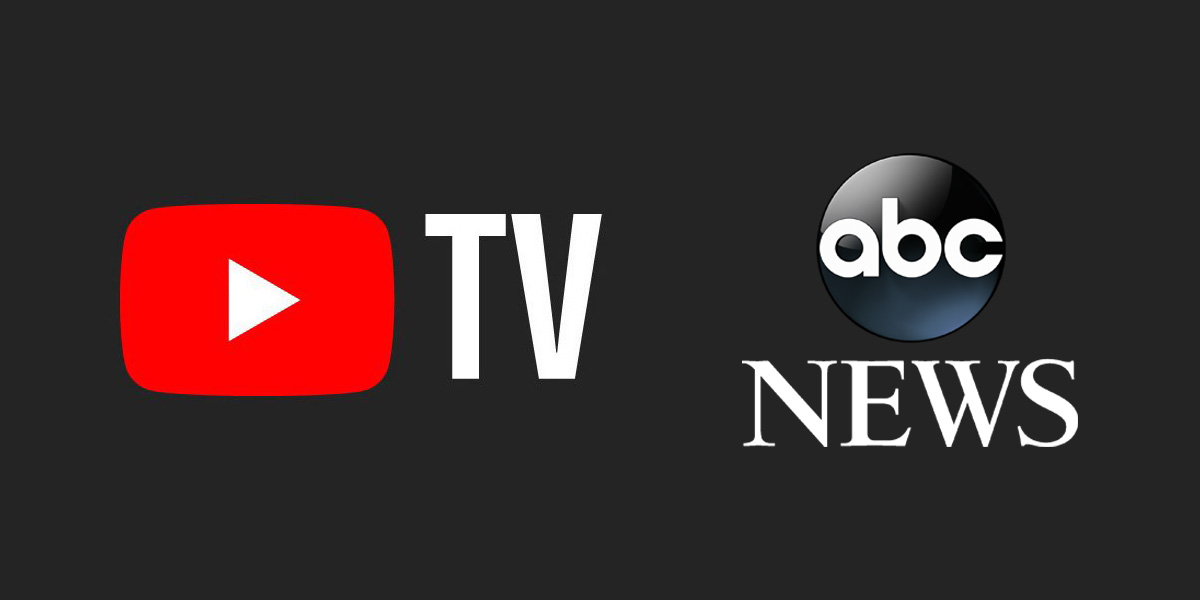 ABC News Live has been expanding its reach considerably in the midst of the coronavirus pandemic, a time where accurate and trustworthy news sources are needed most. Starting today, the ABC News Live channel is going live on YouTube TV for all customers alongside the traditional ABC offering.

ABC News Live, America’s #1 streaming news channel, launches today on YouTube TV. As last reported by Google in early February, YouTube TV has more than 2 million subscribers. The additional distribution occurs at a time when more and more Americans want access to vital news and information from a reliable and trusted source wherever, whenever and however they choose to stream.

The channel is already live at the time we’re covering this news with “Pandemic: What You Need to Know” and “ABC News Live” programs on the queue for the next few hours. 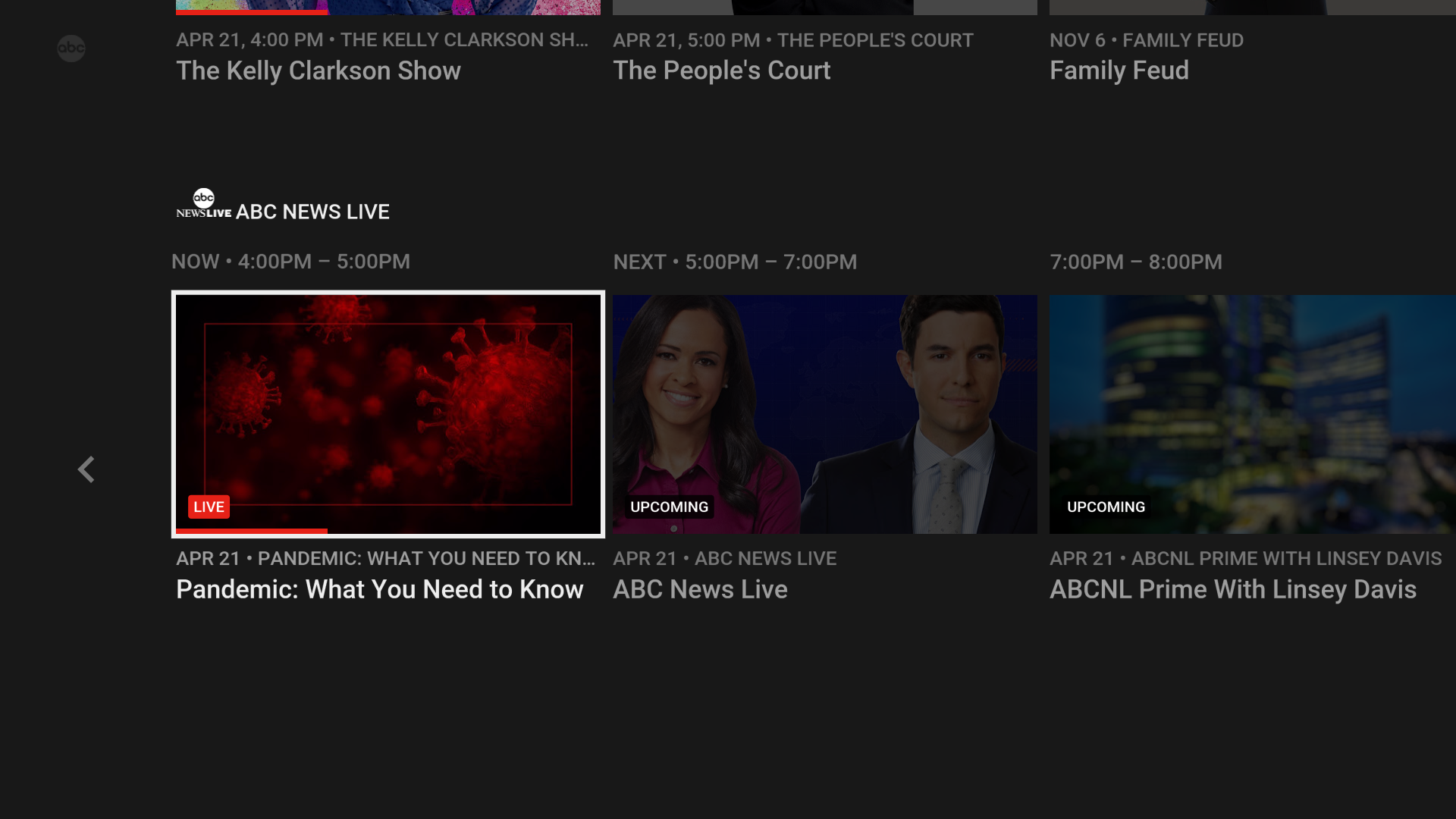 ABC News Live is also being added to Amazon’s News app for Fire TV and Fire tablets. Notably, this comes not long after ABC News launched on Google’s Android TV platform. You can read the full news release below.

ABC News Live, America’s #1 streaming news channel, launches today on YouTube TV, will roll out on Amazon’s news app on all Fire TV devices in the US over the coming weeks and is available on compatible Fire tablets starting today. Since launching in October 2019, Amazon’s free news app has become the most popular news app on Fire TV, offering customizable news feeds for tens of millions of Amazon device customers in the US. As last reported by Google in early February, YouTube TV has more than 2 million subscribers. The additional distribution occurs at a time when more and more Americans want access to vital news and information from a reliable and trusted source wherever, whenever and however they choose to stream.

Since launching in May 2018, ABC News Live has seen a 200% year-over-year increase in monthly viewers (Mar 2019 v. Mar 2020) in part due to wide over-the-top distribution. In addition to Amazon’s news app and YouTube TV, ABC News Live is available through other streaming services such as The Roku Channel, Hulu, Xumo, Sling TV, Facebook, Twitter, ABCNews.com, the ABC News and ABC mobile apps. The standalone ABC News Live apps are also available on Amazon Fire TV, Android TV, Roku and Apple TV. Weekly viewers in March alone jumped 103% since the beginning of the month.

Amazon’s news app is available on all Fire TV devices and compatible Fire Tablets in the US; including Fire TV Stick, Fire TV Stick 4K, Fire TV Cube, and Fire TV Edition smart TVs. To quickly access ABC News Live on the Amazon News app, just say “Alexa, play news from ABC” into the Fire TV Alexa Voice Remote or hands-free with the Fire TV Cube. YouTube TV is a subscription streaming service that lets you watch live and on-demand TV from 70+ top networks through a simple and award-winning experience. It offers live & local sports, news, shows, movies, and more, and can be watched on any screen (phone, tablet, TV, computer). Membership comes with free unlimited cloud DVR storage space to record all your favorites, personalized watch recommendations, and a family plan with 6 accounts per household so the whole family can enjoy.

“Adding ABC News Live onto Amazon’s news app and YouTube TV couldn’t have come at a more critical time for audiences” said Colby Smith, SVP, Digital Media, Disney Direct-to-Consumer & Int. “As millions of streamers seek to understand the personal impact of the pandemic, we want to make news and information easily accessible to them.”

“High quality, credible news and information is more important than ever right now,” said Justin Dial, Senior Executive Producer, ABC News Live. “Since the outbreak began, ABC News Live has been committed to reporting and telling all of the stories and angles that have emerged from the pandemic. I’m glad Amazon’s news app and YouTube TV audiences will now be able to have access to our reporting and the latest information to help them stay safe and understand what’s happening in the world.”

In recent weeks ABC News Live has reported extensively on the novel coronavirus pandemic with stories of doctors on the frontlines across the globe, death rate disparities facing African-Americans, rising xenophobia against Asian American communities, DACA doctors on the frontlines fearful they may be deported, the unemployment catastrophe, small business owners struggling to stay afloat, rural communities that don’t want to shut down and tracked the many communities and neighbors doing good work amid the crisis. The streaming network has also streamed around-the-clock, daily press conferences held by state, federal and health officials, debunked the glut of online myths related to coronavirus, spoken to scientists in the US and across the globe taking part in an ambitious unprecedented worldwide effort to find existing medications that could be used in trials to stop the spread and interviewed newsmakers ranging from Dr. Anthony Fauci to Senators and Governors from across the country.

On top of this essential news, ABC News Live reported on the connection between climate change and pandemics, tracked the crisis at Boeing and the victims of the 737 Max demanding justice, continued to monitor the race for 2020 by focusing on issues particular to states as people vote and covered topics ranging from Harvey Weinstein to cancel culture.

ABC News Live streams live breaking news, live events and original programming including “ABC News Live Prime” anchored by Linsey Davis at 7:00 p.m. ET and 9:00 p.m. ET, “Pandemic: What You Need to Know” anchored by Amy Robach at 4:00 p.m. ET and 8:00 p.m. ET, a growing slate of original documentaries, such as Guardians of the Amazon, The Bomber and Modern Baby, and curated content from ABC News including World News Tonight with David Muir, Good Morning America, FiveThirtyEight and Nightline. This year ABC News Live will ramp up to 18 hours of live, anchored news programs daily across all dayparts, breaking news coverage and all-new original documentaries.