Since November, the primary way to access Stadia has been by purchasing a $129 hardware kit. Other gamers are on the platform through Buddy Passes and other cross-service promotions.

That bundle includes a Stadia Controller and Chromecast Ultra for playing on TVs, but most existing hardware is compatible. This includes Microsoft Xbox, Sony PlayStation, and Nintendo Switch accessories, while you can play on any desktop with Chrome installed. A 10Mbps connection is the minimum needed with max quality requiring 35Mbps or greater.

Mobile was initially limited to Pixel devices, but now includes Samsung, Asus, and Razer phones. Meanwhile, Stadia has rolled out Achievements and the ability to download video and screenshot Captures on the web. Content-wise, there are 38 games today with the promise of 120 in total by year’s end.

The initial buy-in to try Stadia is no longer required today. All that’s needed to sign-up is a Gmail account and downloading the mobile Android or iOS companion app. Over the next 48 hours, free Google Stadia access will be rolling out to the existing set of 14 countries:

Google Stadia free tier: How to sign up, features explained

On top of access opening up, Google is offering two months of Stadia Pro to those just joining. The free Stadia tier — no longer called “Stadia Base” — requires that you purchase games from the Store, while streaming is limited to 1080p.

The monthly $9.99 Pro subscription offers 4K resolution and discounts when buying titles, expansions, and add-ons outright. However, free games that you can claim every month are the real attraction. There are currently nine titles, with access requiring that you keep subscribing:

Best games you can play on Google Stadia 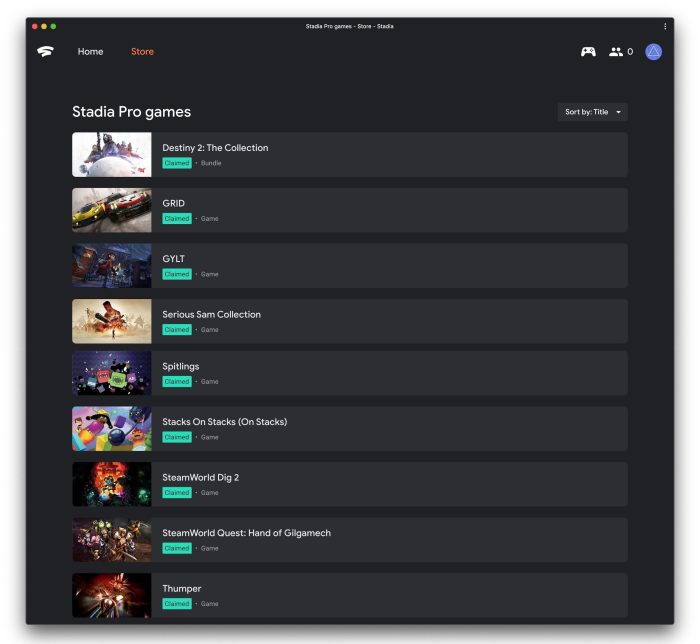 With this wider launch, Google will not be charging existing Stadia Pro users for the next two months of access. Stadia head Phil Harrison today touched upon how “video games can be a valuable way to socialize with friends and family when you’re stuck at home.”

Amid the coronavirus, the company is also working on a “temporary feature” that defaults streaming to 1080p to reduce internet load. Like on YouTube, users will be able to manually opt for 4K quality. Google says the “vast majority of people on a desktop or laptop won’t notice a significant drop in gameplay quality.”