Blloc Ratio hands-on: Is this the best minimal launcher for Android? [Video] 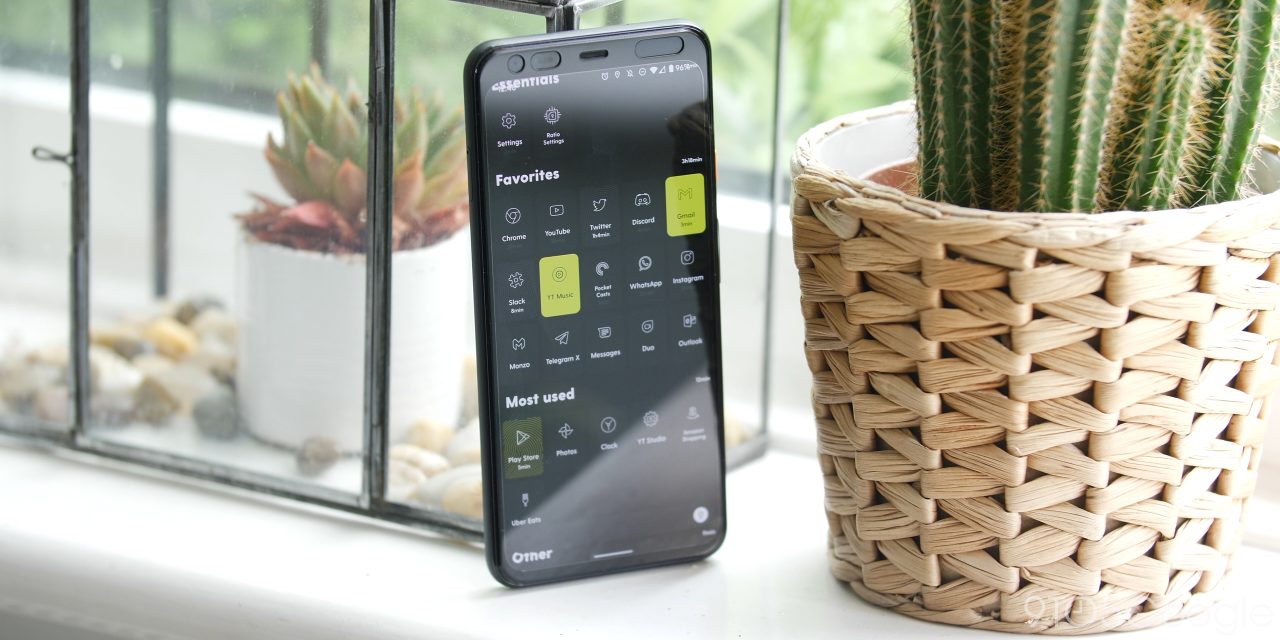 You may not have heard of Blloc, but the Berlin-based company is working on the very impressive Ratio — a launcher aimed at fundamentally changing the way you see and use your smartphone.

We, unfortunately, didn’t get any hands-on time with the minimal Blloc Zero 18 smartphone, which came with the first build of an entirely monochrome interface pre-installed.

Despite the limited availability of the Zero 18, the launcher caught the eye of Android fans. So now the team behind Blloc has decided to test the waters with a release their custom launcher for the masses — although it is currently invite-only.

Still in the Alpha testing phase, Blloc Ratio is easily the most unique and one of the most compelling Android launchers I’ve used in a long time in part thanks to the sheer thought that has gone into it.

It’s designed to make you more aware of just how much you use your device and minimize daily distractions, all while simultaneously helping you to curb overuse with a much more simplified user experience. Considering that we are more accustomed to tweaking, tuning, and enhancing our smartphones with a third-party launcher, this quite a departure from the accepted convention  — at least on Android.

From the outset, this feels like the opposite of most launchers, a sort of “anti-Launcher” if you will. With that in mind, we’ve spent some time using an Alpha build of Blloc’s Ratio on a Google Pixel 4 XL to find out if it really is the future of third-party Android interfaces.

Ratio consists of two main sections or screens. You have a main “Drawers” home view, which collates all of your applications into distinct sections, and the “Root” view. This is a section that can host a user-selection of widgets such as the current weather, some currency and unit conversion tools, RRS feeds, plus a few more on top. It is clearly designed to stop you from diving into apps, giving you information at a glance rather than overwhelming you with options.

From the Root view, you can use the sort of “mini-apps” like a timer, view a weather timeline, and even get news kind of like how the Google Discover feed collates them — but direct from one particular source. It struck me straight away that this would definitely be something that could work really well on the Pixel Launcher or Google Discover feed if implemented in a similar manner.

Using Ratio means a full change of your core OS experience, which, of course, might be a bit jarring for some people out there. Especially those accustomed to having “proper” app drawers and a multitude of icons littering their home screens. You can swipe into the Root view, or stick with your main Drawer view — that’s literally all there is to Ratio from the outset. 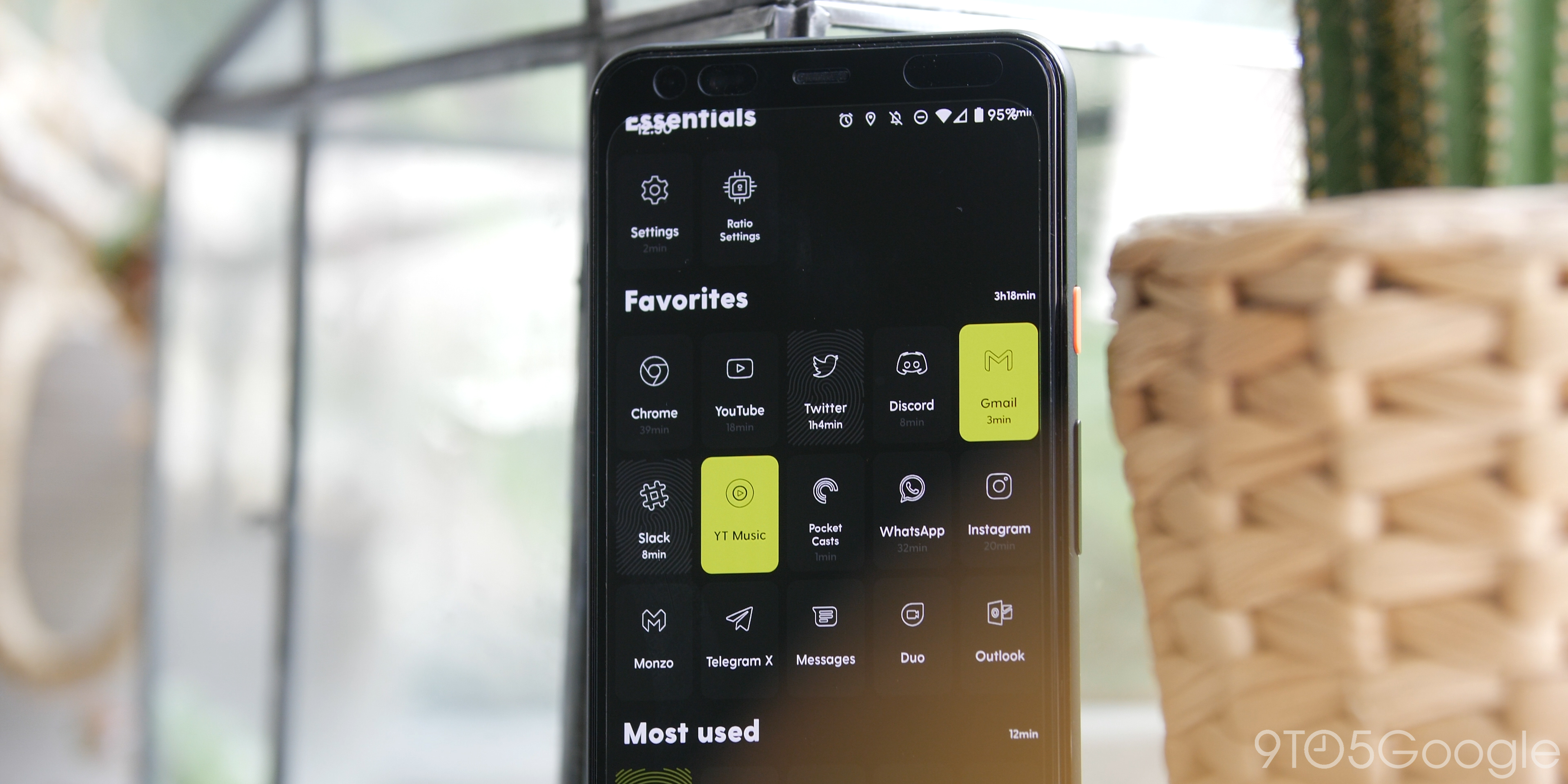 The main view lets you organize your apps into individual sub-folders, which can be expanded and collapsed to reduce clutter on your home view. The preset selection of app folders can be edited and expanded, with some further customization available on app icons themselves. One notable inclusion is that of timers for each section of apps that you use.

Alongside the label you’ll see the collated time of usage, this small indicator makes you far more aware of what the biggest time sinks are on your smartphone. It’s a powerful but simple addition that makes you hold yourself accountable far more than a counter hidden within your Settings menu ever would.

One big thing that might irk some people is the lack of wallpaper when using Blloc Ratio as your default launcher. The preset for Ratio is the dark mode, but you can switch easily between the light “Sun mode.” This just switches the black backgrounds to white, and as someone not fussed by dark mode most of the time, I think it’s actually more attractive. As far as looks go, it’s functional but very refined. 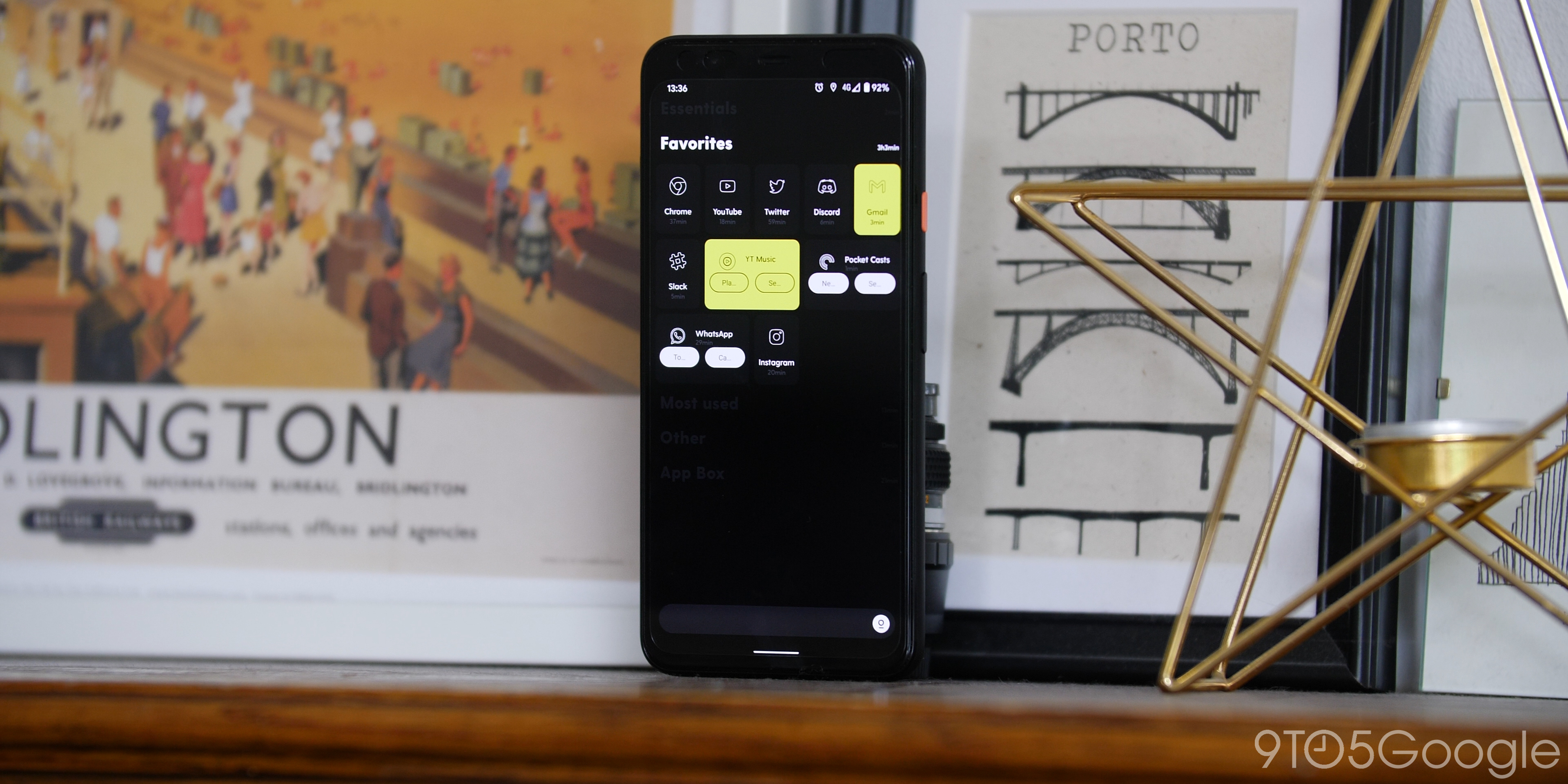 Just because Ratio is more minimal, it doesn’t mean that the team at Blloc wants to stop giving you customization options. You can make it your own in a similar manner to how you can customize iOS. That means you can do the basics like drag and drop icons around into your various drawers and rename them accordingly. Although, on top of that, you can change the color of specific apps, and even expand them with quick toggles — although I wouldn’t suggest this as it does start to get a little cluttered and messy.

I really like that you can turn applications monochrome on an app-by-app basis. This a) is in-keeping with the entire monochrome style but b) actively deters you from overusing certain applications. If you’ve ever used the Digital Wellbeing or Wind Down features in Android Pie onwards, then you’ll know just how turning your apps monochrome makes you want to spend less time scrolling in certain time-hogs on your phone — social media apps being a prime example.

Of course, that ability to adjust what apps you see in color helps in applications that essentially rely on color like Instagram, YouTube, and so on. Using the option sparingly is something I would suggest though. With that said, it’s easy enough to activate on the fly as you can just swipe in from the corner of your display the same way you would activate the Google Assistant on Android 10. 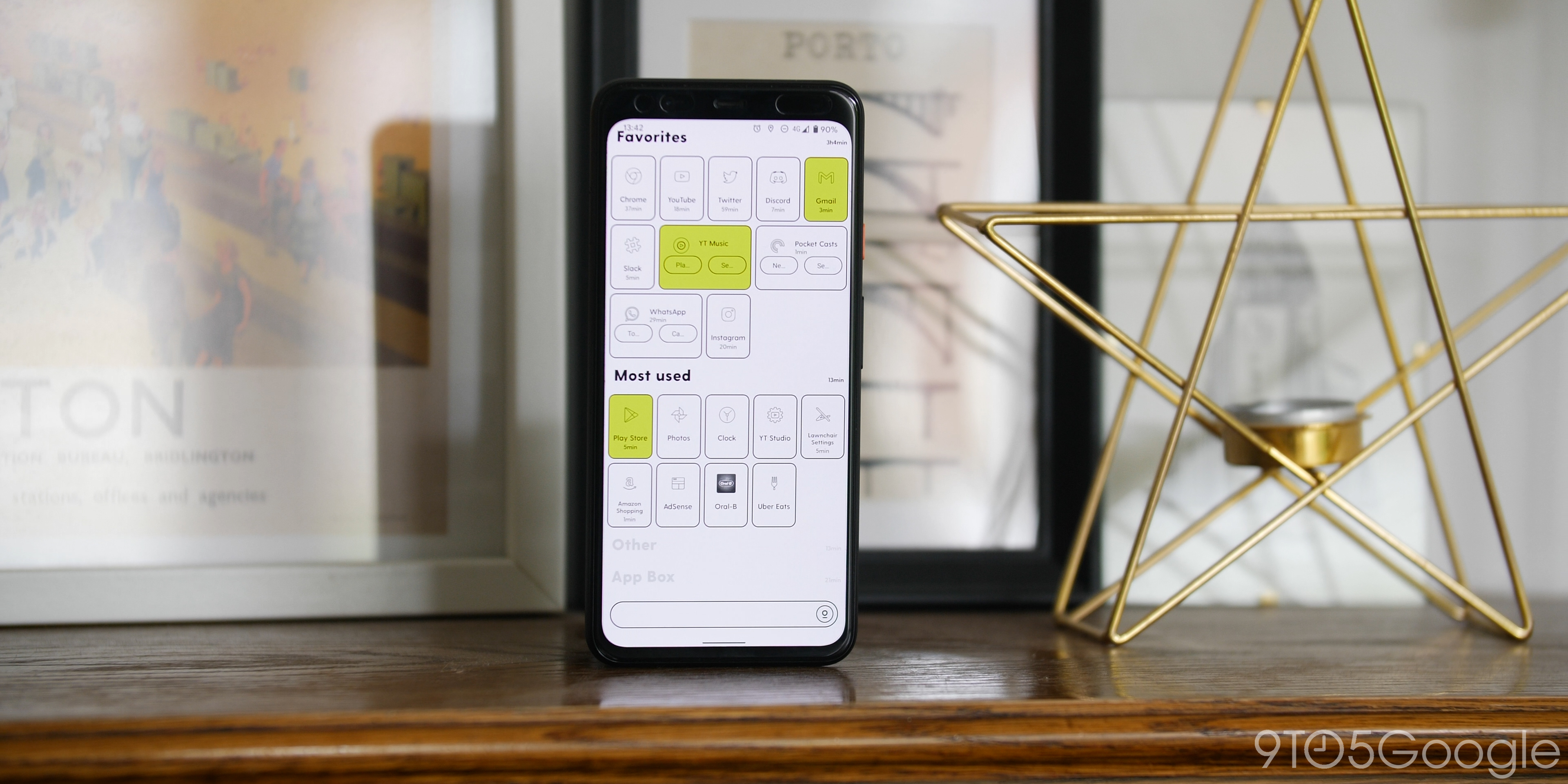 Being able to secure apps using Face Unlock on apps that support it — such as the Google Pixel 4 — is a neat touch, something that I’ve done for my various work-related applications. You can also use in-display fingerprint and physical fingerprint readers too for biometric locking of all of your applications.

This is not a new launcher trick new but when the option is enabled, the app will alter on your home screen with a fingerprint background. This makes it much easier to instantly spot which of your apps are securely locked from prying eyes. The customization doesn’t go much deeper than that, but it is probably enough given the design of Ratio. If you want proper customization, then Ratio likely won’t be for you anyway. 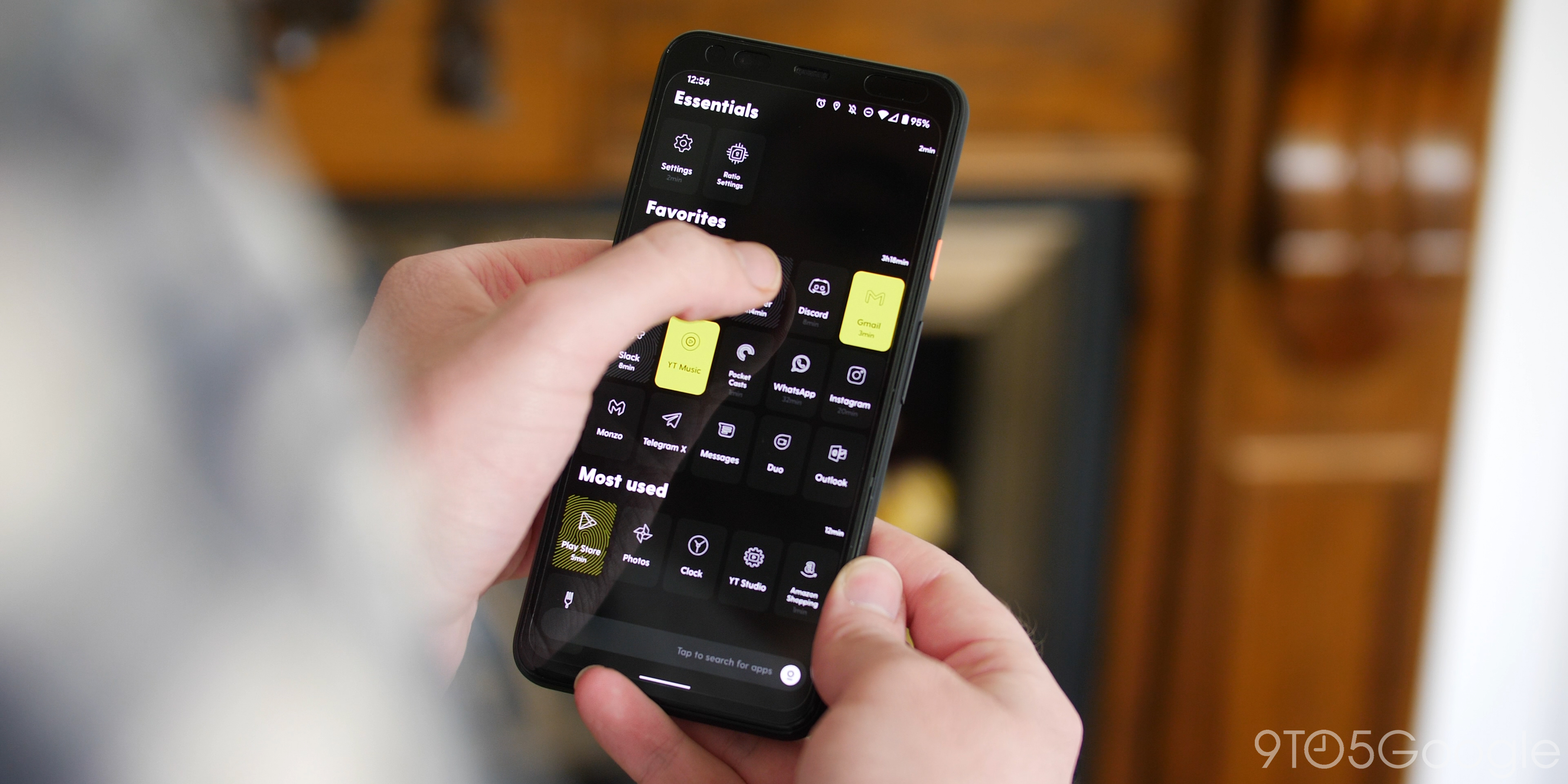 The biggest impression that Blloc Ratio has left on me is just how much I use certain apps on my smartphone on a daily basis. Some of that has most definitely been exacerbated by the COVID-19 lockdown, but since installing, I’ve felt less inclined to use most of my apps. But in some sort of weird paradox, I’ve found myself just admiring how sleek Ratio looks rather than using the apps installed on my phone.

With that in mind, I’m really surprised at just much of a difference that a black and white interface makes to the overall desire to use — or not actively use my phone. It has made me far more conscious of how much time I’m spending or wasting and I suppose that is a positive side effect that the team at Blloc might be aiming for with Ratio.

At this early stage though, there are also a few issues that sometimes make the experience jarring, such as apps locking when using the app switcher. This forces you to head back to the home screen and then re-open apps, although it has the unintended consequence of making me just put my phone down half the time — which could be argued is what Ratio does best.

Coming from more fully-featured Android launchers like Nova and Lawnchair, Ratio is most definitely the complete opposite of those. It is designed in a way to lower your reliance on your smartphone. It just so happens that it is a fantastic looking alternative with some an impressive but streamlined feature-set. Will it be a hit? We’re not entirely sure, but it’s a fantastic alternative that we can’t wait to see fully release at some point soon.

How do I get Blloc’s Ratio launcher on my smartphone?

You will need an invite to download and install Ratio on your Android phone. You can sign-up to join the waiting list right here. However, only a select number of devices are supported including the OnePlus 7, 7T, 7 Pro, 7T Pro, Google Pixel 3a, and Pixel 4. You will also need a Windows PC or Mac to essentially sideload Ratio using USB debugging and the standalone BllocDesk app.