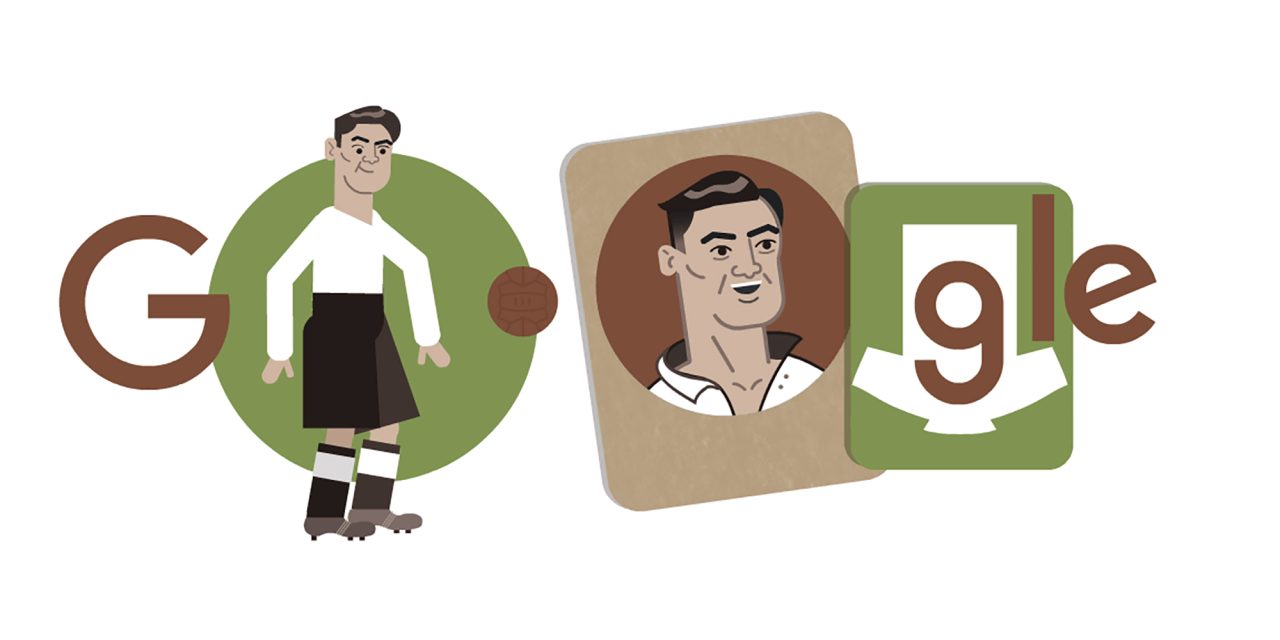 The latest Google Doodle for the UK celebrates one of English footballs most trailblazing stars Frank Soo — often referred to as the “forgotten footballer.”

Today’s Doodle was designed by artist Matthew Cruickshank, it features Soo in a classic 1940/50s “baggy” England strip, juggling one of the infamous leather balls used up until the early 1970s — when synthetic materials began to replace the stitched leather designs.

One of the very first and most prominent pre and post-war footballers, Frank Soo was the first English professional footballer of mixed Chinese and English heritage. During a period when very few non-white and non-English players were playing the game, the Derbyshire-born Soo broke racial barriers playing for the England national team during World War II. To this day, he still remains the only ever player of Asian heritage to represent England at the very highest level.

Frank actually had a bother who was also a promising footballer, but Ronnie Soo made the ultimate sacrifice when killed during World War II. Frank was renowned for his close control, silky skills, and passing range. At just 18-years-old, after playing for his local team Prescot Cables, he was scouted by Stoke City. When he made his debut on 4 November 1933, which made making him the first player of Chinese descent to play in the Football League. However, despite the achievement, the match ended in a 6–1 defeat.

Today’s Doodle was created by Doodler Matthew Cruickshank from North London. Below, he shares some thoughts on the making of the Doodle:

Q: What was your creative approach for this Doodle? Why did you choose this approach?

A: We found very old football trading cards online. This formed the basis of the Doodle, along with simple animation in order to celebrate Frank even more.

Q: Did you draw inspiration from anything in particular for this Doodle?

A: I drew from my memories of being a very average footballer in England with a love of the game. But more importantly, I imagined how many barriers Frank broke down as a brilliant footballer in a minority. He took his talent to the pinnacle.

Q: What do you hope people will take away from this Doodle?

A: A love of football and a celebration of the diversity we have in the modern game today. Frank really played his part in achieving that.

The charismatic Soo was named Stoke captain at 27 and rose to a level of national celebrity only reserved for the “elite sportsman.” In 1940, following the outbreak of World War II, Soo enlisted in the Royal Air Force and continued his legacy as the captain of its football team.

Due to the English Football Association’s decision to deem wartime matches unofficial, even though Frank Soo went on to represent his country in nine such international fixtures by 1945, the record books almost expunge his efforts — hence the “forgotten footballer” moniker.

Soo retired from playing in 1950 and moved on to a successful international coaching career that lasted over three decades. He coached extensively in Sweden, Denmark, and even briefly took charge of the Norway national team. Soo did also briefly make a return to the UK and the EFL with Scunthorpe United in the late 1970s.