Last month, Google launched a Journalism Emergency Relief Fund to “deliver urgent aid” for news publications in light of COVID-19 job losses, furloughs, and closures. The company today announced some of the 5,300 small and medium local newsrooms that will get funding.

Publications will receive between $5,000 to $30,000 in funding with those under the same parent organization capped at $85,000. Google is still waiting for a final funding tally, but the figure is in the tens of millions of dollars.

Over a two-week period that ended in April, the Journalism Emergency Relief Fund saw 12,000 applications from 140 countries. The majority of requests were from EMEA with over 4,700, but North America saw the most “newsrooms funded” at 1,800+. 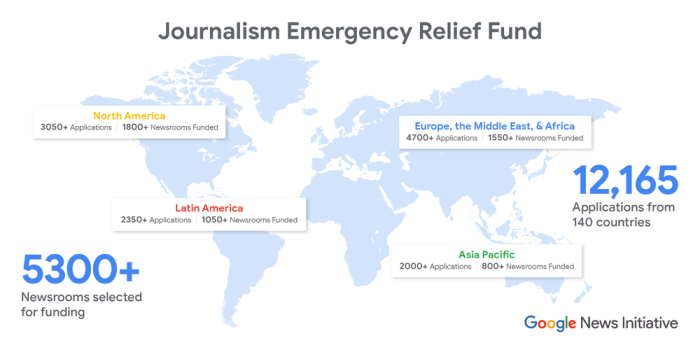 Notably, 90% of those applications were from publications with less than 26 journalists, with the team still reviewing a “a small percentage of projects.” Google considered publications with a digital presence that’s at least 12 months old and staff ranging from 2-100 full-time employees.

We reviewed each application against a set of criteria: publications operating locally, serving a specific geographic community and using the money to continue doing so. More than 300 Googlers joined forces to check the submissions and across the world we held dozens of webinars and office hours to answer questions and guide people through the process.

Google named five publications from each region here, and plans to list everyone who is receiving funding.