Over the past day, a strange Google Fi bug has emerged where long texts are received as Chinese characters. There is currently no fix beyond sending shorter messages.

The first reports of this issue came in yesterday evening. Google Fi users on both Android and iOS are seeing sent texts that are approaching 160-character mark delivered as Chinese characters. Shorter, one-sentence messages do not appear to be affected.

In our testing, a phone with a Google Fi SIM card sent the following SMS:

That to secure these rights, Governments are instituted among Men, deriving their just powers from the consent of the governed, –That whenever any Form of Government

The following (at the bottom of the screen) was received, while the message above is an example of a shorter passage under 160 characters that was received correctly: 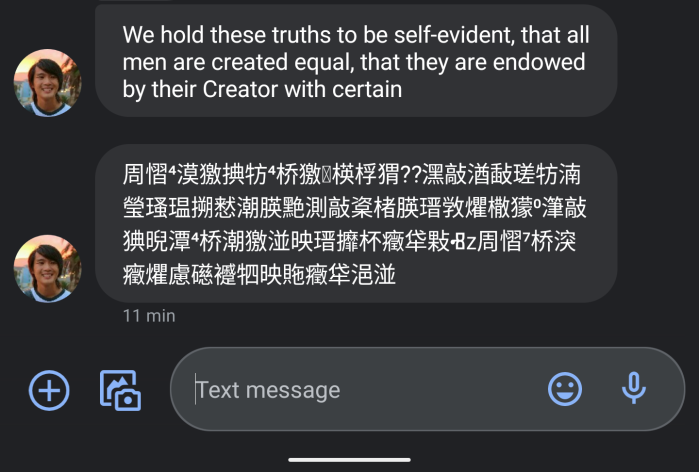 Recipients are not receiving the original message translated into Chinese, but rather random characters that are nonsensical when converted back into English. According to one Redditor, there appears to be an encoding error.

The issue is still ongoing as of this morning and there are dozens of reports spanning Reddit and the official Fi support forum.

One commonality, which we’re able to replicate, is that the recipients are using Verizon. In our testing, long texts from Fi sent to Google Voice do not have this issue. It’s possible that the problem could be on Verizon’s end.

There is currently no fix being offered by Google support agents as this becomes the latest in weird issues between Google’s communication services and Verizon.

Update: As of this evening, the issue has been fixed and long text messages from Fi users are coming in normally. Google says it worked with the carrier in question to resolve the problem.