Several hours ago, users started noticing that the Google Search Knowledge Graph card for Sir Winston Churchill lacks an accompanying image. The company says this disappearance was accidental and will soon be fixed.

The Google Search Liaison on Twitter at 1 a.m. PT on Sunday said it’s “aware an image for Sir Winston Churchill is missing from his Knowledge Graph entry.” This includes when directly searching and when pulling up any other list that the engine generates. For example, instead of his picture appearing alongside other UK Prime Ministers, a gray generic avatar is shown.

We apologise for any concern. This was not purposeful & will be resolved. Images in such panels are automatically created & updated. During an update, they can briefly disappear.

The removal was not intentional, but rather “temporary & will be resolved,” though no timeline was provided. Google is also investigating the underlying issue that led to pictures disappearing:

We don’t have an exact time for when Churchill’s Knowledge Graph image will be restored, but it will be as rapidly done as possible. We’ll want to explore exactly why an automatic update caused it to disappear & see if there are any improvements in those systems to address.

Meanwhile, there’s a related issue where “Churchill’s first term does not appear for a search on UK prime ministers that shows an automatically generated Knowledge Graph list.” Google says its “exploring” why this is the case, and that it’s not specific to Churchill:

We’re exploring why the first terms for Churchill, Wilson, MacDonald & Baldwin are not shown. It might be that our systems are only displaying the last term of prime ministers who had non-consecutive terms. We’ll seek to address this to avoid any unintentional concern.

Update: Two hours after confirming the issue, Google just after 3 a.m. restored Churchill’s picture. The company later provided a more detailed explanation. In late April, some users pointed out that the image Search automatically used in the card was of a younger Churchill and “wasn’t [the] most representative” of the historical figure.

At the end of April, we received feedback that the image of Churchill automatically selected by our systems wasn’t representative of him. The systems had selected a picture of a younger Winston Churchill (shown below), while he’s more famously & iconically pictured when older… pic.twitter.com/eqEirPH6TV

As a result, human reviewers “blocked” the younger image so the engine could select an updated one. However, a bug in the system “prevented a new representative image from updating.” It remained that way until this weekend. 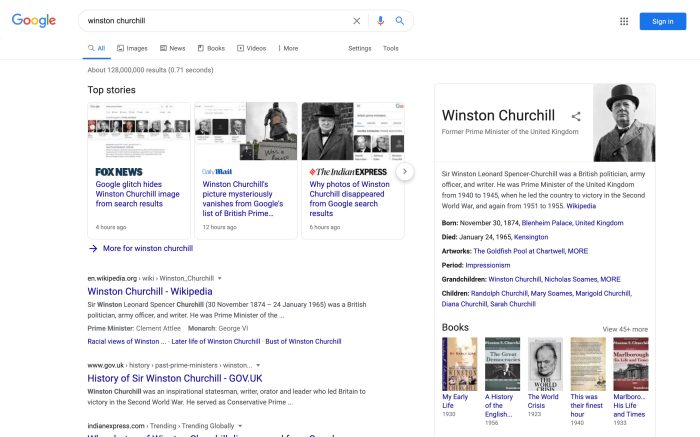