In launching Android 11 Beta 1 last week, Google dramatically expanded the number of users testing the next major version of its operating system. The company is now running an Android 11 Beta software survey to get “feedback on the latest version of Android 11.”

We’d like your feedback on the latest version of Android 11 on your Pixel device. This *anonymous* survey should take you about 10 minutes to complete. We may continue to periodically survey throughout the duration of the beta program.

Please only fill out this survey if your device is running Beta 1 (RPB1.200504.018). You can verify this by going to Settings>About Phone.

This survey is currently aimed at Pixel device owners and something that Google says it might continue going forward. The Google Form was announced through the official Android Beta subreddit on Monday evening with the company encouraging bug reports via the Feedback app. 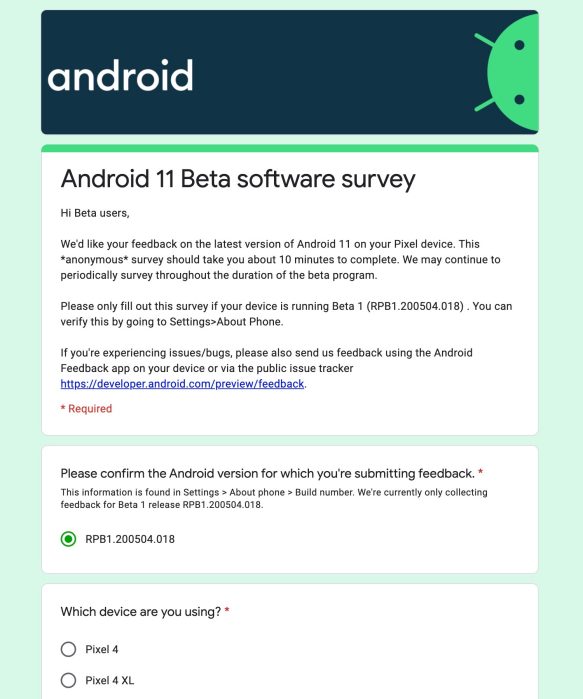 After confirming what build you are running and device, the anonymous survey polls you about “Android Feature/Area Satisfaction” in 10 areas, including Battery, Camera, Bluetooth, and Messaging.

It next asks whether you’d “recommend [Beta 1] to your friends and family” in its current state. That leads to a question about what the “top issue area you experienced with this build” is and whether it would cause you to leave the Android Beta Program. Lastly, there’s an open field to “provide additional feedback on your experience.”

Most users will likely finish the survey in half the recommended time. Two more betas will be released in the coming months before the stable launch in Q3.