A big part of Android 11 is Controls where you can more easily manage smart home devices by long pressing your phone’s power button. You’re presented with a grid of tiles for each light, thermostat, camera, vacuum cleaner, and more. Some are a simple tap to turn on/off, while others can be dragged for precise brightness or temperature adjustments.

The Google Home app already supports these capabilities, and other smart device manufacturers can do the same to appear in Android 11. In recapping and describing these capabilities at the virtual event last night, Google showed a slide called “September 8th Android 11 launch.”

It’s a checklist of how vendors can get ready for the launch of these smart home controls. September 8 falls on a Tuesday, just after Labor Day in the US. It would be in line with last year’s release, and coincide with two more betas coming in July and August.

When the Android 11 Developer Preview launched in February, Google said the final OS was launching in Q3. Even after the unscheduled DP4 release in May, the company confirmed its original timeline. The first consumer devices to get Android 11 will be the Pixel 2, 3, 3a, and 4.

The event also revealed that a replacement for Nest’s Home/Away triggers are coming to Assistant Routines via “presence detection,” while Gentle Wake/Sleep is coming to all smart bulbs in the future. 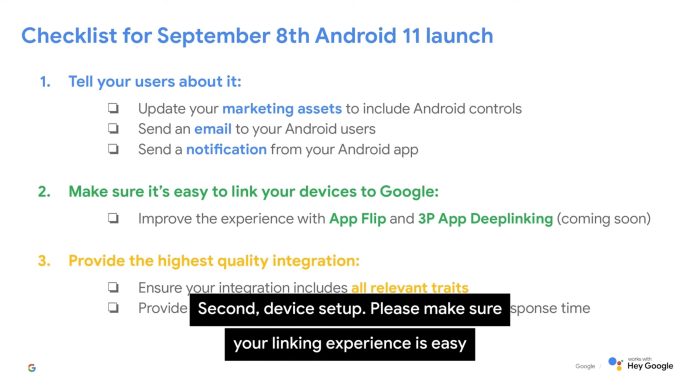 We’ve reached out to Google for comment on Android 11’s launch date.

Update: Google tells us that this date is not confirmed, and was released in error.