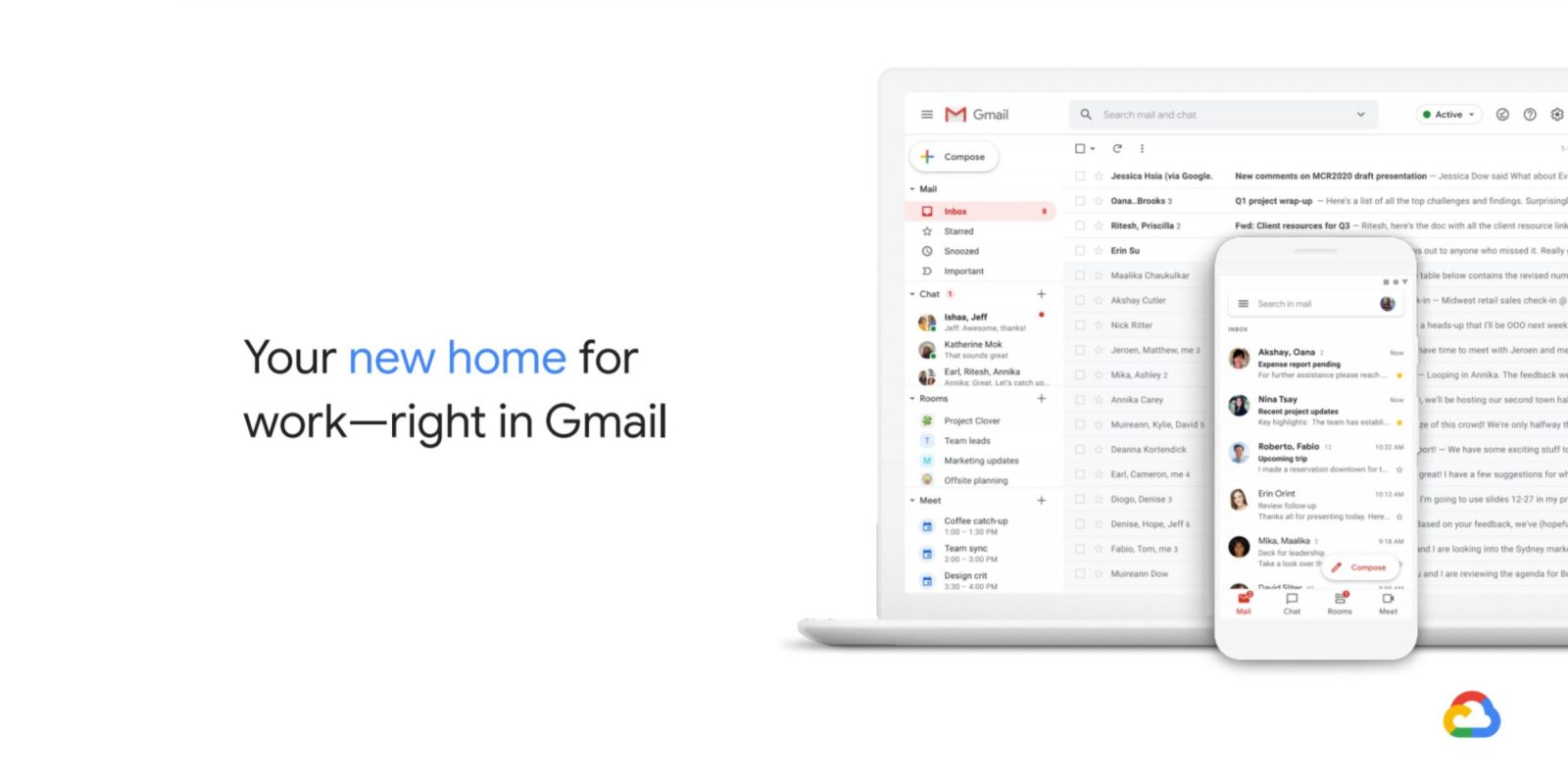 For the past several weeks, we’ve been tracking a big Gmail for Android redesign that incorporates Google Chat and Meet. The video calling integration has been officially announced and is rolling out now, while the rest leaked today. Google is making Gmail the “new home for work” by letting you do everything from the same screen/app.

Google Cloud today kicked off a digital version of its Cloud Next ’20: OnAir event that spans nine weeks. “Productivity & Collaboration” sessions are not expected until next week, but @tahins on Twitter this morning found slides about the new Gmail already live on the conference website.

One slide boldly says that “your new home for work” is “right in Gmail.” In addition to Meet integration — which is already live for some iOS users, Gmail will get bottom bar tabs for “Chat” and “Rooms.” In the former, you see one-to-one and group chats with profile avatars featuring activity/status indicators. Like with emails, Google will “nudge” you to take action on “neglected chats.”

The latter section shows larger conversations for teams and projects. These Rooms are meant to compete with Slack, and have been notably upgraded from what Google started rolling out in June.

Google last month brought Chat to Gmail on the web for G Suite customers. It’s meant to replace classic Hangouts, and provides access to the messaging service and fullscreen Rooms.

The leaked Gmail redesign slides reveal an even bigger push on “bringing things together.” When viewing Rooms in the Gmail web app, you’ll soon be able to have a full Google Docs file open, while an ongoing conversation appears to the left. Tabs also let you view shared “Files” and “Tasks.” In addition to “side-by-side document editing alongside chat,” users can have picture-in-picture video calls.

Other slides show upcoming Google Meet features like hand raising, Q&A, meeting attendance, and blurred — as well as custom — backgrounds. Google officially announced these features last month, and will launch them over the coming months.

At the start of this year, Google was rumored to be working on a unified productivity solution. The company’s most well known service looks to be the app in question. Hopefully, Gmail does not get overloaded with functionality, though users today are able to remove the Meet tab in settings.

We should find out next week when the Gmail redesign will launch.