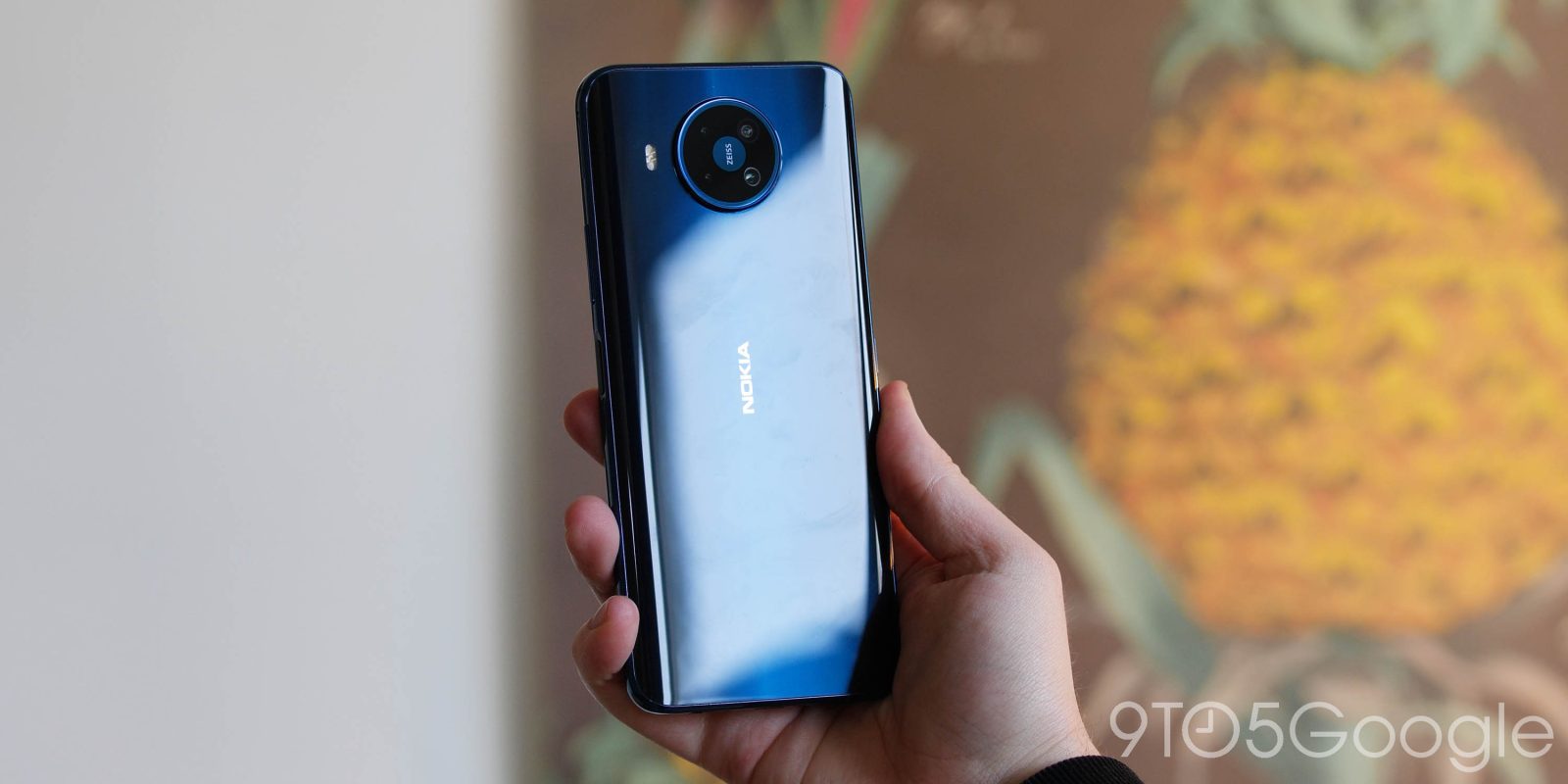 The Nokia 8.3 5G is a reasonably solid device that is massively let down by its release timing. Announced in March 2020, had it hit the market then, it would have been a far more enticing smartphone.

It’s also not hard to notice that this is the smartphone that 007 will be using in the upcoming No Time to Die movie, which has coincidentally suffered a delayed release to the silver screen. Unlike Daniel Craig’s bow as the quintessentially British agent, we’re not as sure the Nokia 8.3 5G will fare quite as well under fire.

The recipe here is familiar but it was much fresher when announced almost six months ago. In terms of Nokia’s 2020 smartphone lineup, this is the flagship from the Finnish firm.

I was shocked at just how large the Nokia 8.3 5G is in the hand. There is a heck of a lot of smartphone to contend with here. It’s pretty hefty, too, at 227g. There’s a sizable 6.81-inch display at the front, but we’ll discuss that more in a moment.

Maybe to help save stretching up, there is no rear fingerprint scanner on the Nokia 8.3 5G. Instead, the Finnish firm has slapped a side-mounted capacitive fingerprint reader within the power button.

I don’t mind it, but I think that doing this sometimes means that the phone immediately feels more catered toward right-handed people. Stretching around with your left hand to unlock your phone isn’t exactly very comfortable or easy. It’s a fast sensor, though, and it also includes the ability to swipe down or up to access the notification shade.

At the opposite side is a dedicated Google Assistant button. Disable this immediately unless you want random unlocks and battery drain from inadvertent in-pocket activations.

Around the back of the Nokia 8.3 5G, the design is a strange hybrid of previous devices. The circular camera module has hints of the Nokia 5.3, while the glossy two-tone Polar Night finish, which glints hues of deep blue, feels like an homage to the Nokia 9 PureView from 2018.

I initially thought it was a plastic rear panel, but it is, in fact, made of Gorilla Glass. After learning this, I felt more inclined to keep using the phone without a case — something that isn’t always a priority with glass sandwich-style devices.

Another notable is a 3.5mm headphone port. It’s a rarity to see the audio socket on devices nowadays, and it’s made all the sweeter as it’s in the vastly superior downward-facing position alongside the USB-C charge port and mono speaker.

A 6.81-inch IPS LCD display at this sort of price isn’t too much of a disappointment, but given the competition to offer AMOLED panels, it might be an oversight. I could have been a little more forgiving if the LCD panel was a high refresh rate panel, but alas, you’re stuck at 60Hz.

This isn’t a complete dealbreaker, but competition is fierce in 2020, and it would have helped elevate the Nokia 8.3 5G above some of the chasing pack. I do like that it is completely flat, which helps with interactions and helps eliminate phantom touches on such a large panel.

At the top right is a punch-hole notch that has become the go-to trend for Android throughout the latter half of 2020. You’ll likely never notice that it is there, plus let display is lost when compared to a dewdrop or teardrop notch.

One thing that really needs to change is the embossed Nokia logo on the chin of just about every Nokia phone in existence. It’s a design throwback, a relic, that really doesn’t need to needlessly cheapen the look of an otherwise reasonable LCD display.

My biggest gripe with the clean Android One experience on the Nokia 8.3 5G is that this device has shipped with Android 10 — not that there is much to hate with Android 10, that is. The Android 11 update is set to roll out soon, but it would have been better straight out of the box.

Everything is fast and fluid thanks to the Qualcomm Snapdragon 765G and either 6 or 8GB of RAM. At no point did I see or notice any major lag. The fact that Nokia’s flavor of Android is so clean means that it works very much in its favor with regard to everyday performance. Apps load quickly, switching and swiping between open applications is quick and painless, plus there is some grunt for gaming, should you need it.

The Snapdragon 765G isn’t exactly a powerhouse chipset, but it is very capable. Just how it ages is another question, but as long as you don’t play tons of 3D games at their highest graphical settings, the Nokia 8.3 5G is more than good enough.

There are literally only two pre-installed Nokia-branded apps out of the box. But one negative is that Netflix and Amazon are also bundled in. However, not having to uninstall anything or change default apps right out of the box is a huge deal. It’s Pixel-lite, and it’s one of the major reasons that Nokia’s resurrection in recent years has been well-received.

This device is also guaranteed all major Android upgrades within the next two years. Due to the delayed release cycle, though, the Nokia 8.3 5G will only be upgraded as far as Android 12 — which is a little disappointing, but you will get security updates for a further year for a total of three years of overall support.

Because the internals are effectively identical to the Pixel 4a (5G), I’d wager that it would match the Google device stride for stride. Save the better animations, I actually haven’t been able to notice any major differences day-to-day on the Nokia 8.3 5G to that of my Pixel 5. That’s even more impressive when you consider the gulf in OS version — although that is admittedly small.

The Zeiss-branded quad-camera setup on the Nokia 8.3 5G is a bit of a by-the-numbers affair for a smartphone within its price range. It comes with a 64-megapixel main sensor, 12-megapixel ultra-wide-angle lens, 2-megapixel macro camera, and 2-megapixel depth sensor.

I have to say that the camera setup is just okay. When using the main 64-megapixel wide lens in auto mode, you’ll get crisp, detailed 16-megapixel shots with reasonable dynamic range and solid colors. Most are perfectly fine but at no point did the Nokia 8.3 5G camera outright “wow” me.

When switching lenses, the quality drops off quite significantly. The ultra-wide-angle produces shots that are far too soft for my liking, plus the white balance seems to shift a little. It’s nice to be able to get a slightly wider field of view, but I would suggest opting to use this mode sparingly.

One frustration I will note here is that you can’t actively zoom out from the main to the ultra-wide lens within the stock camera app. You have to flick between them by tapping within the camera UI. I’m confused as to why this would be omitted but, again, it’s not a dealbreaker by any means.

The macro mode is acceptable, but the portrait mode can be excellent or average — there’s no real middle ground. Edge detection is such a mixed bag, sometimes it’s exceptional but other times it blurs the main subject in random areas. You have to really pick and choose when you utilize portrait mode as a result. Although I do love the ability to change the bokeh or blur to suit classic Zeiss lenses, as a camera nerd this is a really neat touch.

When lighting starts to become tricky, there is a dedicated Night Mode in the default camera app. It’s decent enough for giving a low-light scene a bit more exposure but it pales in comparison to other rival offerings. I’d even say that that the mostly poor Nightscape from OnePlus devices is better.

At 4,500mAh, I had high hopes for the Nokia 8.3 5G battery but it didn’t quite reach my lofty ambitions. All-day usage is still very easily achieved, but I noticed higher than average battery drain when left unplugged overnight.

I regularly saw 5 to 6 hours of screen-on time, which is more than enough for what I personally would call a “heavy day” of usage. Understandably, that might not be good enough for some people out there, it certainly wouldn’t be good enough for the jet-setting, all-action James Bond – for whom this phone is intrinsically linked with.

It’s a solid enough battery but could be a lot better given the substantial cell packed inside. The 18W charge speeds are – like the Pixel series – towards the low-end. To go from 0 to 100% took around an hour and forty minutes. As you’d expect, there is no option to wirelessly charge the Nokia 8.3 5G.

I didn’t go in expecting such crisp and rewarding haptics on the Nokia 8.3 5G, but here we are. I’d definitely place the vibration feedback in the top 5 on Android, and they are actually at least on par with the Google Pixel 5 — and in some cases actually superior.

A solo downward-firing mono speaker is another portion that really does let down device as it is tinny, easy to cover but it does get pretty loud. It might be wise to hook up to a Bluetooth speaker if you want better audio, as the solo speaker on the Nokia 8.3 5G is actually not that good. Although there is a 3.5mm headphone port if you want to hook up to a wired audio system.

I can’t help but think that if the Nokia 8.3 5G hit store shelves a little earlier — and with a marginally lower price tag — then it would be a much better overall buy. The device comes with the same core hardware blueprint at the Pixel 4a (5G) and 5, with the closest software experience to the flagship Google phone. In theory, that should have been a big win.

Realistically, it’s a harder sell at its proposed $699 US price that is relying a little too heavily on the James Bond bandwagon, especially with some notable corner-cutting that isn’t quite as pronounced on Google’s late-2020 flagships. In Europe, you’ve also got to contend with the cheaper OnePlus Nord. It offers more or less the exact same experience at around $150 less.

In isolation, the Nokia 8.3 5G is a good smartphone with a few notable hardware missteps. One bonus is that it is set to receive Android 11 very soon, and also comes with the closest software experience to the Google Pixel series. The very aggressive pricing of the Samsung Galaxy S20 FE makes it hard to recommend anything else at that sub-$600 range — specifically with the S20 FE currently on offer at $599.