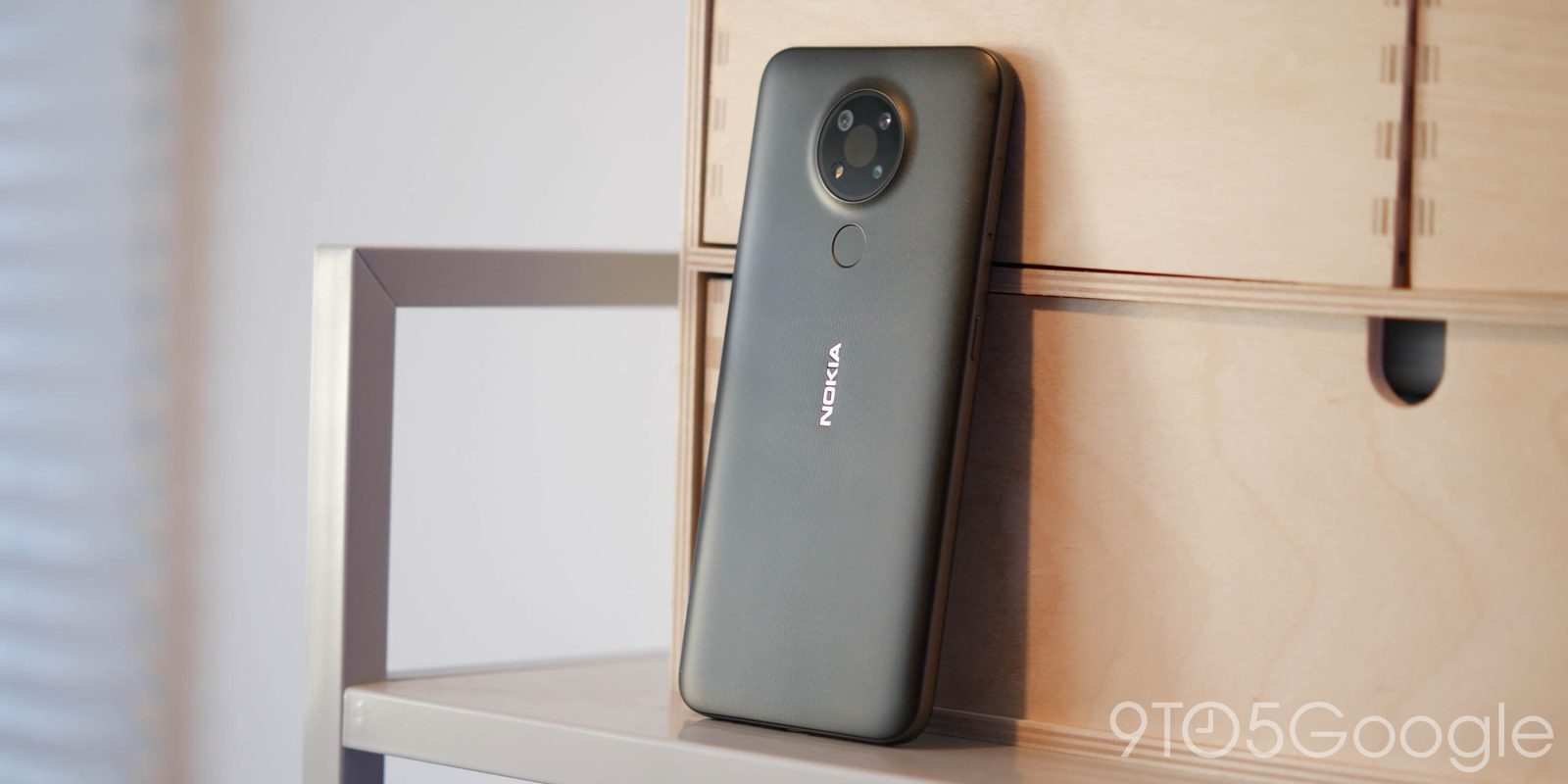 As an advocate of affordable Android smartphones, HMD Global has a portion of the Android One market almost cornered. The recently released Nokia 3.4 is another such cheap, accessible Android One-powered device, but how does it stack up?

We’ll be among the first to tell you that low-end smartphone hardware is improving rapidly year-over-year. Of course, the COVID-19 pandemic has affected the value of the dollar, pound, or euro in your pocket, and the average price of a smartphone has ballooned in recent years.

High-quality affordable smartphones are becoming a necessity, and the Nokia 3.4 is clearly attempting to shoehorn itself into any conversation of the “best” sub-$200 options you can buy.

I will instantly say that the polycarbonate build of the Nokia 3.4 is one of the first things that I “liked” about the device. The actual hand-feel is much nicer than you would expect for a cheap phone; there is a certain poise for a smartphone with such a low entry price.

The usage of a grippy texture on the rear panel is one that I wholeheartedly support. Being able to grab and clasp at the device without needing a case for extra grip is nice, albeit not something everyone is averse to. You can’t help but be impressed, and the parallels between the Nokia 3.4 and its sibling the Nokia 1.3 are immediately obvious. HMD Global has done well to maintain a design heritage, but maybe a little work needs to be done on the slightly confusing naming convention to truly separate device series with each iteration.

One thing I instantly felt was the lack of flex, wobble, or creaking in the body of the Nokia 3.4. This is a solid, well-built smartphone that, although made of cheaper materials, feels no less impressively finished. I do wish the Google Assistant button were removed entirely, as I find it just becomes a pain when active.

As someone with large hands, the size is pretty darn on point. Yes, I do have to stretch to reach some portions of the display, but the placement of side volume buttons and sleep/wake toggle are perfect. The buttons could do with a little work, as they are a tad mushy and lack a real satisfying “click.”

Other notables here include stereo speakers, a rear capacitive fingerprint scanner, and a 3.5 headphone port — all being more or less par for the course on cheaper Android device at this stage of 2021.

Having used a number of affordably-focused devices in recent months, the Nokia 3.4’s 6.39-inch LCD panel is among the nicest — especially at under $150. I can deal with the HD+ 720 by 1560-pixel resolution as it’s fairly sharp and crisp when displaying text or videos. However, the auto-brightness is completely broken out of the box. Often when using the phone with the option enabled, it will get so dim that nothing becomes legible in moderate lighting. It was an instant bugbear during the initial setup process and is something I suggest disabling as soon as you are humanly able.

The panel itself gets fairly bright, colors seem pretty good, there is no real off-axis color-shift, and the usage of a punch-hole over a dewdrop display notch definitely feels better in terms of everyday usability and aesthetic. I find that it doesn’t feel quite as inhibiting or intrusive while feeling somewhat “premium.” There are certainly better panels on affordable devices out there, but given the pricing of the Nokia 3.4, but it’s decent enough.

One notable is the LCD is seemingly brighter with noticeable light bleed towards the bottom half of the display. I can only assume this is due to the fact that this is where the backlighting stems from, as sometimes you’ll notice this more frequently. With auto-brightness disabled, I found it less obvious for what it’s worth.

I found most, if not all, of my frustrations with this device in the performance stakes. At no point does the Nokia 3.4 feel “fast.” There are hangs here and there while you wait for apps to load. Double-tapping the power button to “quick launch” into the camera app is not one that I will miss but once things are running I wouldn’t call the experience terrible.

It’s not often the apps themselves that run poorly — it’s the intermittent periods of loading, re-opening, and general interaction. Obviously, a lot of this is limited due to the chipset and low RAM committed to the Nokia 3.4. This is compounded by the lack of available storage, too, as the Nokia 3.4 ships with just 32GB of storage. You’re effectively forced to get a microSD card. By doing so you’re ensuring you can at least offload files to external storage and feel less pressure when doing the “basics” on this device.

This is the very first smartphone I have used for an extended period that utilizes the Qualcomm Snapdragon 460 chipset. I feel it’s compounded slightly by the inclusion of just 3GB of RAM — but it is worth noting you can up that to 4GB. Maybe some software tweaks can be made to improve the experience, but this feels like a bridge between an Android Go set of specifications and one for an Android One smartphone.

Do not even try to play any demanding 3D games, as you’ll just end up entering a world of slideshows and potential crashes. I think that the daily performance is something you can “get used to,” but the gaming performance is flat out non-existent. Just avoid gaming.

I do like the look and feel of Android One, as it mimics the Pixel Experience the closest of any ROM out there. To me, this is effectively what “Stock Android” is in 2021 and beyond. Nokia has added just a few of its own app and a camera app — for a total of three. None of these would I consider “bloat” in the traditional sense, but your opinion may differ.

It’s definitely worth noting that the Nokia 3.4 lacks the ability to connect to 5GHz Wi-Fi networks, which instantly puts it at a disadvantage in certain scenarios. I had to connect to a 2.4GHz network reserved only for my smart home tech upon first launch, which does mean that connectivity is not as consistent here. If this is big deal, then you might want to look elsewhere.

The circular camera bump at the rear has three cameras for you to play around with. There is a 13-megapixel main sensor, 5-megapixel ultra-wide-angle lens, and a 2-megapixel depth sensor for faking bokeh in Portrait Mode. Don’t be fooled, though — this is a very, very mediocre digital camera setup.

I have found images to be fairly soft compared to many other similarly-specced (and priced) smartphone camera systems. Aesthetically, I don’t mind this “look” on a dedicated camera with a larger sensor and lenses that can be removed, replaced, and tuned manually. Unfortunately, on a smartphone, it’s a big sore point.

That said, this is a smartphone coming in at under $180. If one area lags behind in a smartphone at this price point, the camera is a valid trade-off. The dynamic range is fairly good, the portrait mode can do some impressive stuff too. Low-light proves to be a pain point, but the Night Mode manages to bump the quality marginally when needed.

HMD Global and Nokia need to have a look at the camera UI at some point very soon, too. Sure, it’s functional, but it’s just not all that fun to use. Switching lenses is a chore, but that is mainly due to the internals rather than the camera UI though.

Video modes are sparse with 1080p 60fps recording capabilities being the height of things in the moving image portion of the Nokia 3.4 package. It’s reasonable for a smartphone of this asking price, but it’s poor in the grand scheme of things.

While some areas feel like they let you down or fall short, the lifespan of the Nokia 3.4 is very hard to fault. If you are looking to carry the same device for multiple days without needing to dive for your charger, then the Nokia 3.4 should be a candidate.

Part of that is due to the relatively large 4,000mAh battery, while the HD+ display and efficient chipset help too. You’ll likely have no problem playing videos all-day without any battery anxiety creeping in. 10W charge speeds mean that it will take nearly two hours to go from 0 to 100% again.

While Nokia is pretty much the poster child for affordable Android One smartphones, the 3.4 feels just perfectly adequate. There isn’t enough here to really wow or leave you feeling that spending extra is a waste. That probably isn’t a major negative, but there are some quite glaring problems among an otherwise okay smartphone.

I’m hesitant to recommend the Nokia 3.4 when the Nokia 5.3 exists in the same universe. I’d argue you’re better off bumping your budget and grabbing that slightly older smartphone for an overall better experience. The performance is a little too choppy to be a decent alternative to some of Nokia’s older – and now cheaper – hardware.

You can pick it up directly from Nokia in the US priced at $179.99, but again, we recommend looking at alternatives such as the Nokia 5.3, which is just $20 more from Amazon or Nokia direct.