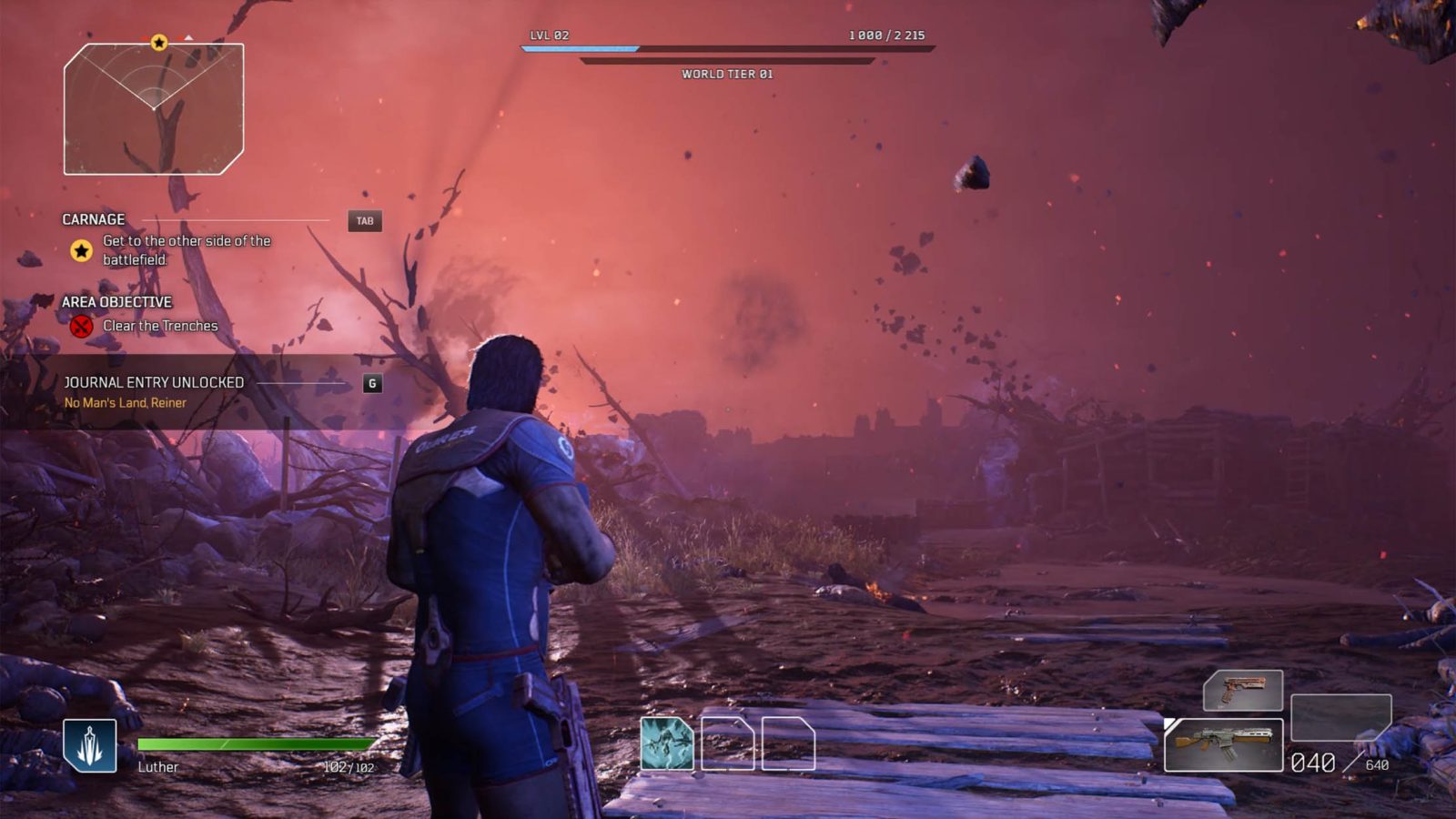 9to5Google’s Game of the Week is brought to you by GeForce NOW. GeForce NOW Instantly transforms nearly any laptop, desktop, Mac, SHIELD TV, Android device, iPhone, or iPad  into the PC gaming rig you’ve always dreamed of. And, every GFN Thursday, new games are added to the GeForce NOW Library.

After playing through several hours of the recently released Outriders, I can honestly say that this is the fusion of Mass Effect, Gears of War, Destiny and — to a certain extent James Cameron’s Avatar — that I didn’t think I needed in my life, but here we are.

Having come right off the back of a long-overdue playthrough of Red Dead Redemption 2, I’ve been itching to find a new IP to really sink my teeth into and I was genuinely excited to give Outriders a playthrough. A few hours in, and I’m enjoying the familiarity. It’s like a comfortable pair of slippers, albeit with a little extra cushioning and some slightly tweaked fabric.

If you’ve ever played Gears of War, the third-person cover mechanic will be instantly familiar but the magic abilities reminded me — a steadily ageing gamer — of the classes used throughout the Mass Effect series. It probably helped that the gunplay feels like a hybrid of the two.

The main story is a little bit derivative and has a group of mercenaries called the “Outriders” heading on a trip across the galaxy from Earth to Enoch as our home planet has become a bit of a hellscape due to a lack of resources yada, yada, yada. It’s nothing that cinema and video games haven’t already taken a well-worn path down previously but it sets things up nicely to just slap a trigger button on your gamepad when faced with wave after wave of on-screen drones.

When you’ve landed on Enoch, things start to go awry — shock! This leaves your character “Altered” which is to say you get some magical powers. These come in handy in firefights and I believe are quite similar to the Light powers that are available in the Destiny games. I made the decision to opt for the “Trickster” class, but I feel like I might create a new playable character to trial run some of the other classes and associated powers as I’m not a huge fan of sneaking around when faced with hordes of faceless foes.

It shares more in common with Destiny here too, with raids and whatnot but I’ve yet to play some co-op to really dig in properly yet. I do really like the idea of the Expeditions mode, which lets you play through replayable missions at increasing difficulty levels. This was one of my favorite modes from Mass Effect 3 but one I really wanted to play more of.

I’m really glad that developers People Can Fly added an auto-apply loot mechanic when picking up new guns and armour as while it’s neat to be able to delve into a menu to make tweaks and adjustments, I just want to utilize my playtime effectively. This has allowed me to spend less time staring at menu screens and more time just blasting faceless enemies and levelling up my character. I’m sure this might annoy some Outriders players, as they prefer to tinker but I’m content with the game choosing which weapons and power-ups will be more beneficial to my playthrough.

My only big gripe was the Outriders AI can feel relentless at times. However, this works both ways as firefights are truly intense with more powerful enemies proving to be bullet sponges that require clip upon clip to take down. Now that could be a real pain point, but I found it managed to skirt a fine line between annoying and fulfilling a sense of accomplishment.

The variety of guns has me wanting to try approaching different sections at odds with how I would usually play many looter shooters. I’m not saying expect gunplay to be as varied as say Borderlands 2 or 3, but each gun class does feel like it has advantages and disadvantages. I’ve grown very accustomed to one of the early game sniper rifles and it’s really satisfying to pull off headshots when an enemy pops up from behind cover. The dialled up gore really does help hammer home the differences in each of your weapons, with lumps of flesh flying when pummeling enemies with clip after clip.

Although this playstyle isn’t actively possible in every scenario, I have found myself fleeing or rushing for cover to try and recoup health as I’m charged by heavy-duty foes. Your health does replenish but at a slower rate than some other similar-style titles. Dying resets everything within the small arena you have wandering into, and that means replaying even Outriders trickiest portions. I found this quite frustrating and it led me to play a little more cautiously, hugging rails, borders and avoiding open map sections.

While I’m some way off completing the game and the storyline isn’t exactly the most captivating — at least in the early stages. I can’t help be feel compelled to play a “little further” until ultimately I’ve lost a few hours when I only planned on playing for a couple of missions. I can see why Outriders has been a divisive title so far, but it really does manage to fill a Gears of War shaped looter-shooter gap in my PC gaming catalogue. Now I just need to convince my friends to join my co-op crew.

OUTRIDERS is available to purchase on PC through Steam and Epic Games Store, and once it’s in your library you can launch it from GeForce NOW to play on any laptop, desktop, Mac, SHIELD TV, Android device, iPhone, or iPad.

9to5Google’s Game of the Week is brought to you by GeForce NOW. GeForce NOW Instantly transforms nearly any laptop, desktop, Mac, SHIELD TV, Android device, iPhone, or iPad  into the PC gaming rig you’ve always dreamed of. And, every GFN Thursday, new games are added to the GeForce NOW Library. Check out this week’s featured games, including the Stronghold series by Firefly studios.