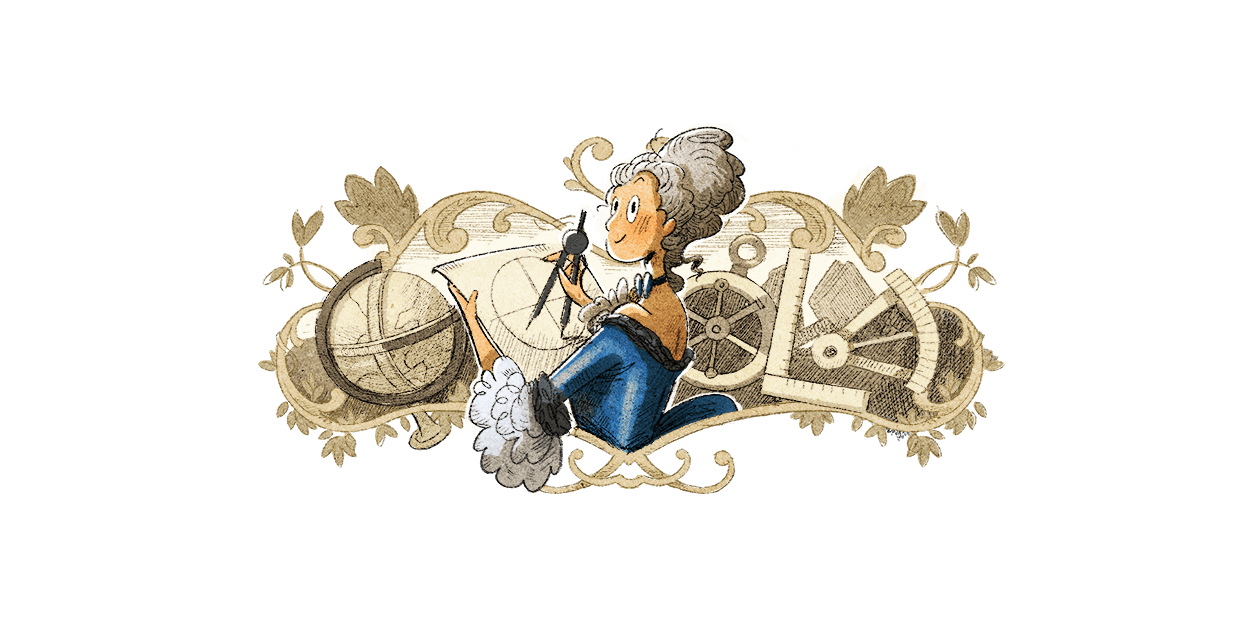 The latest Google Doodle is dedicated to Émilie du Châtelet, the French mathematician and philosopher best known for translating and expanding on Isaac Newton’s laws of physics.

Gabrielle Émilie Le Tonnelier de Breteuil, Marquise du Châtelet – or more simply Émilie du Châtelet – was born on December 17, 1706 in Paris, France into a family of lesser nobility. From a young age, Émilie was recognized to have both an interest in and a talent for the sciences.

As a female child of nobility, it was expected that these interests be quashed or at least not actively encouraged, but instead her father would at times make arrangements for prominent authors and scientists to teach Émilie about subjects like mathematics and astronomy. By the age of 12, Émilie du Châtelet was fluent in French, German, Greek, Italian, and Latin.

At some point, her studies were ceased, possibly due to being arranged to marry the Marquis Florent-Claude du Chastellet-Lomont in 1725, at the age of 18. In 1733, Émilie du Châtelet reemerged to more strongly pursue the study of math and science, hiring the finest minds of France to be her tutor. In one amusing anecdote, Émilie du Châtelet followed a tutor into a men’s only establishment and was promptly removed. Unphased, she simply had men’s clothes made for herself and returned.

Around this time, she made the acquaintance of Voltaire, the well known philosopher and essayist, the two became dear friends, lovers, and occasional rivals. In 1738, the two entered a contest held by Paris Academy seeking new writings on the nature of fire, writing opposing pieces. Both hers and Voltaire’s essays were honored and published, making Émilie du Châtelet the first woman to be published by Paris Academy.

That same year, she and Voltaire worked together on Elements of the Philosophy of Newton, a book that managed to unpack all of Sir Isaac Newton’s thoughts, both scientific and philosophic, in a way that more people could understand. The book was crucial in turning France from the incorrect thinking of Cartesianism to the more accurate model of Newtonian physics.

Her appreciation for Newton’s way of thinking continued in 1740, when she anonymously published Institutions de Physique – or Foundations of Physics – which combined Newton’s physics and metaphysics, along with the thoughts of other great minds of the time. Considered today to be one of her crowning achievements, the work was originally created to teach physics to her son.

Shortly before her death in 1749, Émilie du Châtelet completed a French translation of all three books of Newton’s Philosophiæ Naturalis Principia Mathematica, the foundational work on mechanics and physics. In the translation, she also built on Newton’s ideas, accurately proposing that energy isn’t made or lost, only converted to different forms. To this day, du Châtelet’s translation is the definitive version in France.

Today’s Google Doodle depicts Émilie du Châtelet surrounded by many common tools of multiple trades like math and physics, including compasses, protractors, and rulers. Notably, the philosopher is drawn in a deep blue dress, surely inspired by one of the historical portraits of du Châtelet.

Over on the Google Doodle Blog, the company has shared a few early drafts of alternate designs, each depicting du Châtelet deep in her studies.