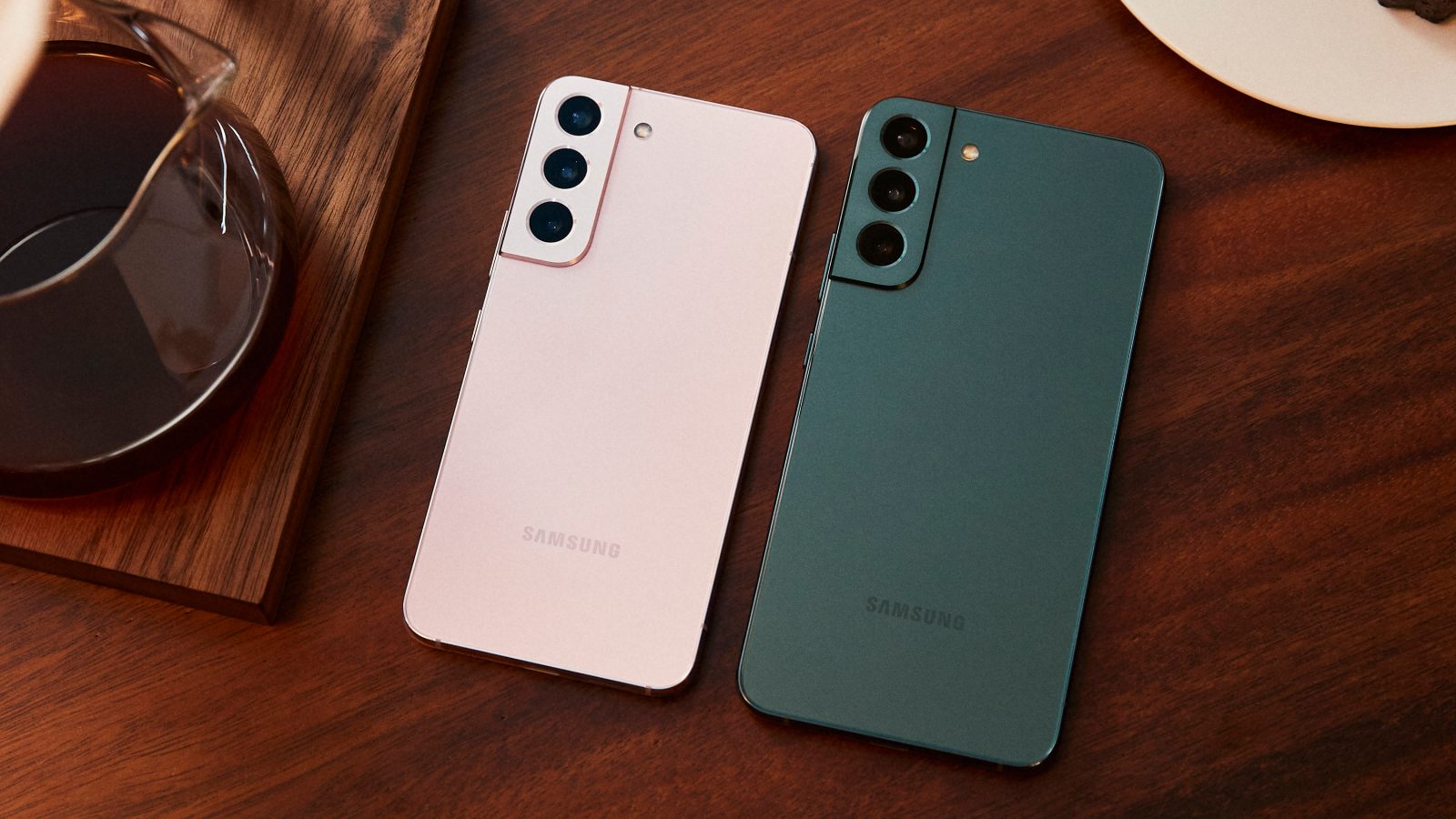 The best-selling flagship Android smartphones are back for another round, with the Samsung Galaxy S22 and Galaxy S22+ offering minor upgrades from the year before at the same price points. Here’s what’s new.

Galaxy S22 and Galaxy S22+ represent the base model of Samsung’s lineup, with the “Ultra” model offering a huge display, no-compromise specs, and S Pen support.

With its more affordable, mass-market devices, Samsung is merely iterating on the Galaxy S21 series. The design is essentially identical, with Phantom Black, Phantom White, Green, and Pink
Gold colorways, stronger “Armor Aluminum” frames, and a focus on sustainability with a new material made up of recycled fishing nets. The phone’s box is also made up of fully recycled materials with minimal plastic use.

The biggest difference this year is that Samsung is making both phones smaller. The Galaxy S22 offers up a 6.1-inch display compared to the S21’s 6.2-inch display. Slimmer bezels, though, lead to a considerably smaller phone at every dimension.

Meanwhile, the Galaxy S22+ goes from a 6.7-inch display on its predecessor to a 6.6-inch display on this new model, again shrinking the overall package considerably. These changes also result in both phones having smaller batteries at 3,700 mAh and 4,500 mAh, respectively. Both phones support wireless charging and USB-C, but no charger is included in the box with either device.

Both phones are powered by the latest chipsets, with the Snapdragon 8 Gen 1 from Qualcomm in the United States and select other countries and the Exynos 2200 in other international regions. Storage options include 128GB and 256GB tiers — neither with microSD support — with RAM locked at 8GB. Android 12 and One UI 4.1 run the show with the promise of four years of major Android updates and an ultrasonic fingerprint sensor for the display.

In the camera department, Samsung is upgrading its mass-market models with a 50MP primary camera that has a larger sensor. That’s backed up by a 12MP ultrawide camera, 10MP telephoto camera, and a 10MP selfie camera.

Differences between the two phones, besides the size, include charging speeds. The Galaxy S22 can charge at 25W, while the S22+ can refuel much faster at 45W. The smaller Galaxy S22 also loses UWB, where the Galaxy S22+ offers the feature. Wi-Fi 6E is also limited to the larger phone.

Pre-orders for the Galaxy S22 and Galaxy S22+ start today, February 9, with the phone set to start shipping later this month. Pre-orders include $100 or $150, respectively, in credit for accessories on Samsung.com. Pre-orders also come with the option to purchase a Galaxy Tab S8 device for 25% off.